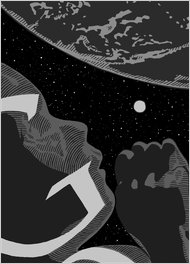 Science fiction never imagined Google, but it certainly imagined computers that would advise us what to do. HAL 9000, in “2001: A Space Odyssey,” will forever come to mind, his advice, we assume, eminently reliable — before his malfunction. But HAL was a discrete entity, a genie in a bottle, something we imagined owning or being assigned. Google is a distributed entity, a two-way membrane, a game-changing tool on the order of the equally handy flint hand ax, with which we chop our way through the very densest thickets of information. Google is all of those things, and a very large and powerful corporation to boot.

We have yet to take Google’s measure. We’ve seen nothing like it before, and we already perceive much of our world through it. We would all very much like to be sagely and reliably advised by our own private genie; we would like the genie to make the world more transparent, more easily navigable. Google does that for us: it makes everything in the world accessible to everyone, and everyone accessible to the world. But we see everyone looking in, and blame Google.

Google is not ours. Which feels confusing, because we are its unpaid content-providers, in one way or another. We generate product for Google, our every search a minuscule contribution. Google is made of us, a sort of coral reef of human minds and their products. And still we balk at Mr. Schmidt’s claim that we want Google to tell us what to do next. Is he saying that when we search for dinner recommendations, Google might recommend a movie instead? If our genie recommended the movie, I imagine we’d go, intrigued. If Google did that, I imagine, we’d bridle, then begin our next search.

We never imagined that artificial intelligence would be like this. We imagined discrete entities. Genies. We also seldom imagined (in spite of ample evidence) that emergent technologies would leave legislation in the dust, yet they do. In a world characterized by technologically driven change, we necessarily legislate after the fact, perpetually scrambling to catch up, while the core architectures of the future, increasingly, are erected by entities like Google.

William Gibson is the author of the forthcoming novel “Zero History.”