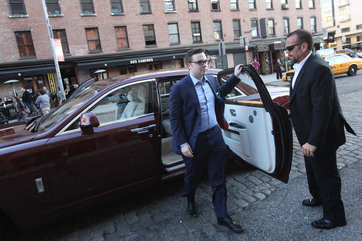 I HAVE a major problem: I just glanced at my $45,000 Chopard watch, and it’s telling me that my Rolls-Royce may not make it to the airport in time for my private jet flight.

Yes, I know my predicament doesn’t register high on the urgency scale. It’s not exactly up there with malaria outbreaks in the Congo or street riots in Athens. But it’s a serious issue, because my assignment today revolves around that plane ride.

“Step on it, Mike,” I instruct my chauffeur, who nods and guides the $350,000 car into the left lane of the West Side Highway.

Let me back up a bit. As a reporter who writes about Wall Street, I spend a fair amount of time around extreme wealth. But my face is often pressed up against the gilded window. I’ve never eaten at Per Se, or gone boating on the French Riviera. I live in a pint-size Brooklyn apartment, rarely take cabs and feel like sending Time Warner to The Hague every time my cable bill arrives.

But for the next 24 hours, my goal is to live like a billionaire. I want to experience a brief taste of luxury — the chauffeured cars, the private planes, the V.I.P. access and endless privilege — and then go back to my normal life.

The experiment illuminates a paradox. In the era of the Occupy Wall Street movement, when the global financial elite has been accused of immoral and injurious conduct, we are still obsessed with the lives of the ultrarich. We watch them on television shows, follow their exploits in magazines and parse their books and public addresses for advice. In addition to the long-running list by Forbes, Bloomberg now maintains a list of billionaires with rankings that update every day.

Really, I wondered, what’s so great about billionaires? What privileges and perks do a billion dollars confer? And could I tap into the psyches of the ultrawealthy by walking a mile in their Ferragamo loafers?

At 6 a.m., Mike, a chauffeur with Flyte Tyme Worldwide, picked me up at my apartment. He opened the Rolls-Royce’s doors to reveal a spotless white interior, with lamb’s wool floor mats, seatback TVs and a football field’s worth of legroom. The car, like the watch, was lent to me by the manufacturer for the day while The New York Times made payments toward the other services.

Mike took me to my first appointment, a power breakfast at the Core club in Midtown. “Core,” as the cognoscenti call it, is a members-only enclave with hefty dues — $15,000 annually, plus a $50,000 initiation fee — and a membership roll that includes brand-name financiers like Stephen A. Schwarzman of the Blackstone Group and Daniel S. Loeb of Third Point.

Over a spinach omelet, Jennie Enterprise, the club’s founder, told me about the virtues of having a cloistered place for “ultrahigh net worth individuals” to congregate away from the bustle of the boardroom.

“They want someplace that respects their privacy,” she said. “They want a place that they can seamlessly transition from work to play, that optimizes their time.”

After breakfast, I rush back to the car for a high-speed trip to Teterboro Airport in New Jersey, where I’m meeting a real-life billionaire for a trip on his private jet. The billionaire, a hedge fund manager, was scheduled to go down to Georgia and offered to let me interview him during the two-hour jaunt on the condition that I not reveal his identity.

[div class=attrib]Image: Waited On: Mr. Roose exits the Rolls-Royce looking not unlike many movers and shakers in Manhattan. Courtesy of New York Times.[end-div]