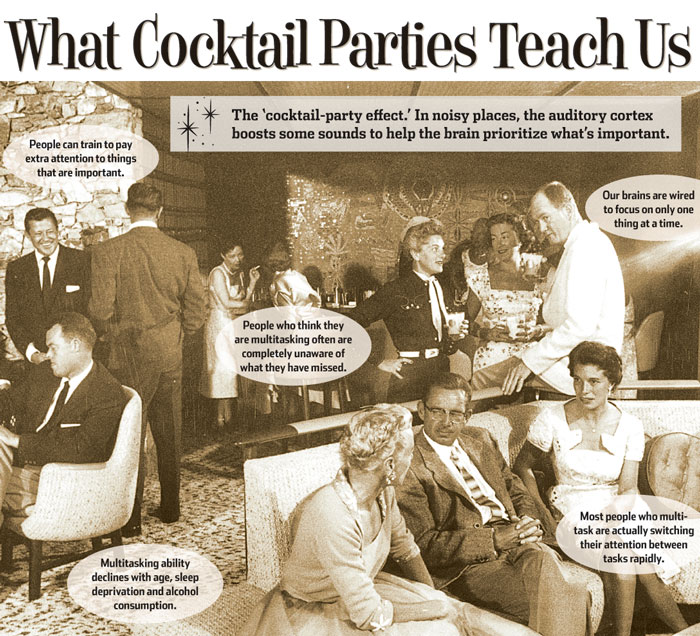 The hit drama Mad Men shows us that cocktail parties can be fun — colorful drinks and colorful conversations with a host of very colorful characters. Yet cocktail parties also highlight one of our limitations, the inability to multitask. We are single-threaded animals despite the constant and simultaneous bombardment for our attention from all directions, and to all our senses.

Melinda Beck over at the WSJ Health Journal summarizes recent research that shows the deleterious effects of our attempts to multitask — why it’s so hard and why it’s probably not a good idea anyway, especially while driving.

You’re at a party. Music is playing. Glasses are clinking. Dozens of conversations are driving up the decibel level. Yet amid all those distractions, you can zero in on the one conversation you want to hear.

This ability to hyper-focus on one stream of sound amid a cacophony of others is what researchers call the “cocktail-party effect.” Now, scientists at the University of California in San Francisco have pinpointed where that sound-editing process occurs in the brain—in the auditory cortex just behind the ear, not in areas of higher thought. The auditory cortex boosts some sounds and turns down others so that when the signal reaches the higher brain, “it’s as if only one person was speaking alone,” says principle investigator Edward Chang.

These findings, published in the journal Nature last week, underscore why people aren’t very good at multitasking—our brains are wired for “selective attention” and can focus on only one thing at a time. That innate ability has helped humans survive in a world buzzing with visual and auditory stimulation. But we keep trying to push the limits with multitasking, sometimes with tragic consequences. Drivers talking on cellphones, for example, are four times as likely to get into traffic accidents as those who aren’t.

Many of those accidents are due to “inattentional blindness,” in which people can, in effect, turn a blind eye to things they aren’t focusing on. Images land on our retinas and are either boosted or played down in the visual cortex before being passed to the brain, just as the auditory cortex filters sounds, as shown in the Nature study last week. “It’s a push-pull relationship—the more we focus on one thing, the less we can focus on others,” says Diane M. Beck, an associate professor of psychology at the University of Illinois.

That people can be completely oblivious to things in their field of vision was demonstrated famously in the “Invisible Gorilla experiment” devised at Harvard in the 1990s. Observers are shown a short video of youths tossing a basketball and asked to count how often the ball is passed by those wearing white. Afterward, the observers are asked several questions, including, “Did you see the gorilla?” Typically, about half the observers failed to notice that someone in a gorilla suit walked through the scene. They’re usually flabbergasted because they’re certain they would have noticed something like that.

“We largely see what we expect to see,” says Daniel Simons, one of the study’s creators and now a professor of psychology at the University of Illinois. As he notes in his subsequent book, “The Invisible Gorilla,” the more attention a task demands, the less attention we can pay to other things in our field of vision. That’s why pilots sometimes fail to notice obstacles on runways and radiologists may overlook anomalies on X-rays, especially in areas they aren’t scrutinizing.

And it isn’t just that sights and sounds compete for the brain’s attention. All the sensory inputs vie to become the mind’s top priority.