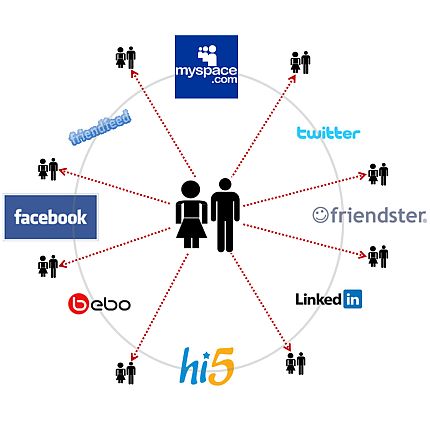 No surprise. Women and men use online social networks differently. A new study of online behavior by researchers in Vienna, Austria, shows that the sexes organize their networks very differently and for different reasons.

One of the interesting insights that social networks offer is the difference between male and female behaviour.

In the past, behavioural differences have been hard to measure. Experiments could only be done on limited numbers of individuals and even then, the process of measurement often distorted people’s behaviour.

That’s all changed with the advent of massive online participation in gaming, professional and friendship  networks. For the first time, it has become possible to quantify exactly how the genders differ in their approach to things like risk and communication.

Gender specific studies are surprisingly rare, however. Nevertheless a growing body if evidence is emerging that social networks reflect many of the social and evolutionary differences that we’ve long suspected.

Earlier this year, for example, we looked at a remarkable study of a mobile phone network that demonstrated the different reproductive strategies that men and women employ throughout their lives, as revealed by how often they call friends, family and potential mates.

Today, Michael Szell and Stefan Thurner at the Medical University of Vienna in Austria say they’ve found significance differences in the way men and women manage their social networks in an online game called Pardus with over 300,000 players.

In this game, players  explore various solar systems in a virtual universe. On the way, they can mark other players as friends or enemies, exchange messages, gain wealth by trading  or doing battle but can also be killed.

The interesting thing about online games is that almost every action of every player is recorded, mostly without the players being consciously aware of this. That means measurement bias is minimal.

The networks of friends and enemies that are set up also differ in an important way from those on social networking sites such as Facebook. That’s because players can neither see nor influence other players’ networks. This prevents the kind of clustering and herding behaviour that sometimes dominates  other social networks.

Szell and Thurner say the data reveals clear and significant differences between men and women in Pardus.

For example, men and women  interact with the opposite sex differently.  “Males reciprocate friendship requests from females faster than vice versa and hesitate to reciprocate hostile actions of females,” say Szell and Thurner.

Women are also significantly more risk averse than men as measured by the amount of fighting they engage in and their likelihood of dying.

They are also more likely to be friends with each other than men.

These results are more or less as expected. More surprising is the finding that women tend to be more wealthy than men, probably because they engage more in economic than destructive behaviour.