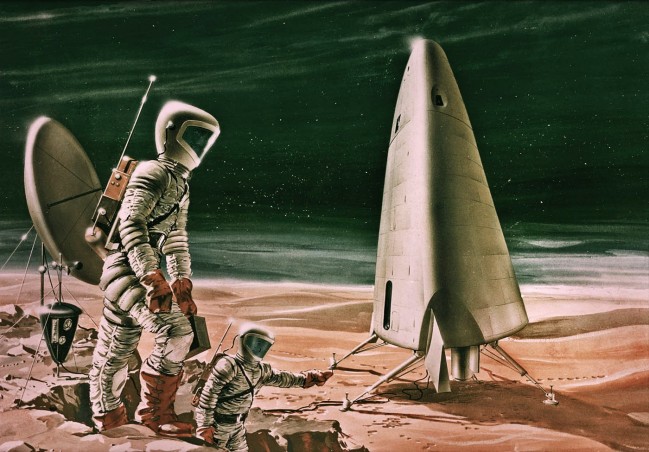 Dennis Tito, the world’s first space tourist, would like to send a private space mission to Mars in 2018. He has pots of money and has founded a non-profit to gather partners and donors to get the mission off the ground. NASA has other plans. The U.S. space agency is tasked by the current administration to plan a human mission to Mars for the mid-2030s. However, due to budgetary issues, fiscal cliffs, and possible debt and deficit reduction, nobody believes it will actually happen. Though, many in NASA and lay-explorers at heart continue to hope.

In August, NASA used a series of precise and daring maneuvers to put a one-ton robotic rover named Curiosity on Mars. A capsule containing the rover parachuted through the Martian atmosphere and then unfurled a “sky crane” that lowered Curiosity safely into place. It was a thrilling moment: here were people communicating with a large and sophisticated piece of equipment 150 million miles away as it began to carry out experiments that should enhance our understanding of whether the planet has or has ever had life. So when I visited NASA’s Johnson Space Center in Houston a few days later, I expected to find people still basking in the afterglow. To be sure, the Houston center, where astronauts get directions from Mission Control, didn’t play the leading role in Curiosity. That project was centered at the Jet Propulsion Laboratory, which Caltech manages for NASA in Pasadena. Nonetheless, the landing had been a remarkable event for the entire U.S. space program. And yet I found that Mars wasn’t an entirely happy subject in Houston—especially among people who believe that humans, not only robots, should be exploring there.

In his long but narrow office in the main building of the sprawling Houston center, Bret Drake has compiled an outline explaining how six astronauts could be sent on six-month flights to Mars and what they would do there for a year and a half before their six-month flights home. Drake, 51, has been thinking about this since 1988, when he began working on what he calls the “exploration beyond low Earth orbit dream.” Back then, he expected that people would return to the moon in 2004 and be on the brink of traveling to Mars by now. That prospect soon got ruled out, but Drake pressed on: in the late 1990s he was crafting plans for human Mars missions that could take place around 2018. Today the official goal is for it to happen in the 2030s, but funding cuts have inhibited NASA’s ability to develop many of the technologies that would be required. In fact, progress was halted entirely in 2008 when Congress, in an effort to impose frugality on NASA, prohibited it from using any money to further the human exploration of Mars. “Mars was a four-letter dirty word,” laments Drake, who is deputy chief architect for NASA’s human spaceflight architecture team. Even though that rule was rescinded after a year, Drake knows NASA could perpetually remain 20 years away from a manned Mars mission.

If putting men on the moon signified the extraordinary things that technology made possible in the middle of the 20th century, sending humans to Mars would be the 21st-century version. The flight would be much more arduous and isolating for the astronauts: whereas the Apollo crews who went to the moon were never more than three days from home and could still make out its familiar features, a Mars crew would see Earth shrink into just one of billions of twinkles in space. Once they landed, the astronauts would have to survive in a freezing, windswept world with unbreathable air and 38 percent of Earth’s gravity. But if Drake is right, we can make this journey happen. He and other NASA engineers know what will be required, from a landing vehicle that could get humans through the Martian atmosphere to systems for feeding them, sheltering them, and shuttling them around once they’re there.

The problem facing Drake and other advocates for human exploration of Mars is that the benefits are mostly intangible. Some of the justifications that have been floated—including the idea that people should colonize the planet to improve humanity’s odds of survival—don’t stand up to an economic analysis. Until we have actually tried to keep people alive there, permanent human settlements on Mars will remain a figment of science fiction.

A better argument is that exploring Mars might have scientific benefits, because basic questions about the planet remain unanswered. “We know Mars was once wet and warm,” Drake says. “So did life ever arise there? If so, is it any different than life here on Earth? Where did it all go? What happened to Mars? Why did it become so cold and dry? How can we learn from that and what it may mean for Earth?” But right now Curiosity is exploring these very questions, firing lasers at rocks to determine their composition and hunting for signs of microbial life. Because of such robotic missions, our knowledge of Mars has improved so much in the past 15 years that it’s become harder to make the case for sending humans. People are far more adaptable and ingenious than robots and surely would find things drones can’t, but sending them would jack up the cost of a mission exponentially. “There’s just no real way to justify human exploration solely on the basis of science,” says Cynthia Phillips, a senior research scientist at the SETI Institute, which hunts for evidence of life elsewhere in the universe. “For the cost of sending one human to Mars, you could send an entire flotilla of robots.”

And yet human exploration of Mars has a powerful allure. No planet in our solar system is more like Earth. Our neighbor has rhythms we recognize as our own, with days slightly longer than 24 hours and polar ice caps that grow in the winter and shrink in the summer. Human explorers on Mars would profoundly expand the boundaries of human experience—providing, in the minds of many space advocates, an immeasurable benefit beyond science. “There have always been explorers in our society,” says Phillips. “If space exploration is only robots, you lose something, and you lose something really valuable.”

Mars was proposed as a place to explore even before the space program existed. In the 1950s, scientists such as Wernher von Braun (who had developed Nazi Germany’s combat rockets and later oversaw work on missiles and rockets for the United States) argued in magazines and on TV that as space became mankind’s next frontier, Mars would be an obvious point of interest. “Will man ever go to Mars?” von Braun wrote in Collier’s magazine in 1954. “I am sure he will—but it will be a century or more before he’s ready.”

Image: Artist’s conception of the Mars Excursion Module (MEM) proposed in a NASA Study in 1964. Courtesy of Dixon, Franklin P. Proceeding of the Symposium on Manned Planetary Missions: 1963/1964, Aeronutronic Divison of Philco Corp.