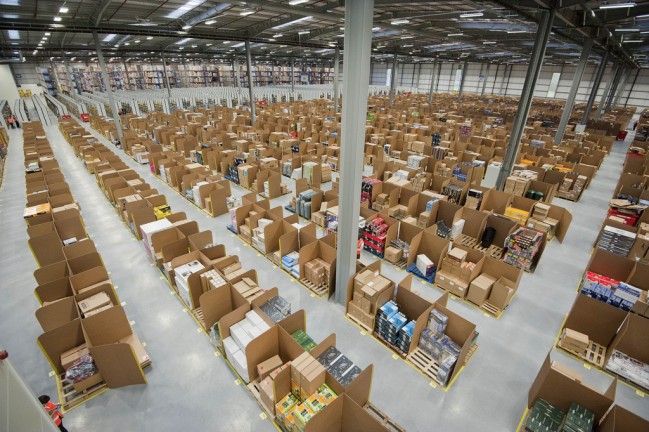 Traditional retailers look at retailing primarily as a marketing and customer acquisition and relationship problem. For Amazon, it’s more of an engineering and IT problem with solutions to be found in innovation and optimization.

Why do some stores succeed while others fail? Retailers constantly struggle with this question, battling one another in ways that change with each generation. In the late 1800s, architects ruled. Successful merchants like Marshall Field created palaces of commerce that were so gorgeous shoppers rushed to come inside. In the early 1900s, mail order became the “killer app,” with Sears Roebuck leading the way. Toward the end of the 20th century, ultra-efficient suburban discounters like Target and Walmart conquered all.

Now the tussles are fiercest in online retailing, where it’s hard to tell if anyone is winning. Retailers as big as Walmart and as small as Tweezerman.com all maintain their own websites, catering to an explosion of customer demand. Retail e-commerce sales expanded 15 percent in the U.S in 2012—seven times as fast as traditional retail. But price competition is relentless, and profit margins are thin to nonexistent. It’s easy to regard this $186 billion market as a poisoned prize: too big to ignore, too treacherous to pursue.

Even the most successful online retailer, Amazon.com, has a business model that leaves many people scratching their heads. Amazon is on track to ring up $75 billion in worldwide sales this year. Yet it often operates in the red; last quarter, Amazon posted a $41 million loss. Amazon’s founder and chief executive officer, Jeff Bezos, is indifferent to short-term earnings, having once quipped that when the company achieved profitability for a brief stretch in 1995, “it was probably a mistake.”

Look more closely at Bezos’s company, though, and its strategy becomes clear. Amazon is constantly plowing cash back into its business. Its secretive advanced-research division, Lab 126, works on next-generation Kindles and other mobile devices. More broadly, Amazon spends heavily to create the most advanced warehouses, the smoothest customer-service channels, and other features that help it grab an ever-larger share of the market. As former Amazon manager Eugene Wei wrote in a recent blog post, “Amazon’s core business model does generate a profit with most every transaction … The reason it isn’t showing a profit is because it’s undertaken a massive investment to support an even larger sales base.”

Much of that investment goes straight into technology. To Amazon, retailing looks like a giant engineering problem. Algorithms define everything from the best way to arrange a digital storefront to the optimal way of shipping a package. Other big retailers spend heavily on advertising and hire a few hundred engineers to keep systems running. Amazon prefers a puny ad budget and a payroll packed with thousands of engineering graduates from the likes of MIT, Carnegie Mellon, and Caltech.

Other big merchants are getting the message. Walmart, the world’s largest retailer, two years ago opened an R&D center in Silicon Valley where it develops its own search engines and looks for startups to buy. But competing on Amazon’s terms doesn’t stop with putting up a digital storefront or creating a mobile app. Walmart has gone as far as admitting that it may have to rethink what its stores are for. To equal Amazon’s flawless delivery, this year it even floated the idea of recruiting shoppers out of its aisles to play deliveryman, whisking goods to customers who’ve ordered online.

Amazon is a tech innovator by necessity, too. The company lacks three of conventional retailing’s most basic elements: a showroom where customers can touch the wares; on-the-spot salespeople who can woo shoppers; and the means for customers to take possession of their goods the instant a sale is complete. In one sense, everything that Amazon’s engineers create is meant to make these fundamental deficits vanish from sight.

Amazon’s cunning can be seen in the company’s growing patent portfolio. Since 1994, Amazon.com and a subsidiary, Amazon Technologies, have won 1,263 patents. (By contrast, Walmart has just 53.) Each Amazon invention is meant to make shopping on the site a little easier, a little more seductive, or to trim away costs. Consider U.S. Patent No. 8,261,983, on “generating customized packaging” which came into being in late 2012.

“We constantly try to drive down the percentage of air that goes into a shipment,” explains Dave Clark, the Amazon vice president who oversees the company’s nearly 100 warehouses, known as fulfillment centers. The idea of shipping goods in a needlessly bulky box (and paying a few extra cents to United Parcel Service or other carriers) makes him shudder. Ship nearly a billion packages a year, and those pennies add up. Amazon over the years has created more than 40 sizes of boxes– but even that isn’t enough. That’s the glory of Amazon’s packaging patent: when a customer’s odd pairing of items creates a one-of-a-kind shipment, Amazon now has systems that will compute the best way to pack that order and create a perfect box for it within 30 minutes.

For thousands of online merchants, it’s easier to live within Amazon’s ecosystem than to compete. So small retailers such as EasyLunchboxes.com have moved their inventory into Amazon’s warehouses, where they pay a commission on each sale for shipping and other services. That is becoming a highly lucrative business for Amazon, says Goldman Sachs analyst Heath Terry. He predicts Amazon will reap $3.5 billion in cash flow from third-party shipping in 2014, creating a very profitable side business that he values at $38 billion—about 20 percent of the company’s overall stock market value.

Jousting directly with Amazon is tougher. Researchers at Internet Retailer calculate that Amazon’s revenue exceeds that of its next 12 competitors combined. In a regulatory filing earlier this year, Target—the third-largest retailer in the U.S.—conceded that its “digital sales represented an immaterial amount of total sales.” For other online entrants, the most prudent strategies generally involve focusing on areas that the big guy hasn’t conquered yet, such as selling services, online “flash sales” that snare impulse buyers who can’t pass up a deal, or particularly challenging categories such as groceries. Yet many, if not most, of these upstarts are losing money.