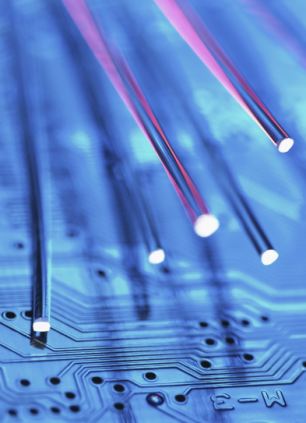 The spied-upon — and that’s most of us — must wonder how the spymasters of the NSA eavesdrop on their electronic communications. After all, we are led to believe that the agency with a voracious appetite for our personal data — phone records, financial transactions, travel reservations, texts and email conversations — gathered it all without permission. And, apparently, companies such as Google, Yahoo and AT&T with vast data centers and sprawling interconnections between them, did not collude with the government.

So, there is growing speculation that the agency tapped into the physical cables that make up the very backbone of the Internet. It brings a whole new meaning to the phrase World Wide Web.

The recent revelation that the National Security Agency was able to eavesdrop on the communications of Google and Yahoo users without breaking into either companies’ data centers sounded like something pulled from a Robert Ludlum spy thriller.

How on earth, the companies asked, did the N.S.A. get their data without them knowing about it?

The most likely answer is a modern spin on a century-old eavesdropping tradition.

People knowledgeable about Google and Yahoo’s infrastructure say they believe that government spies bypassed the big Internet companies and hit them at a weak spot — the fiber-optic cables that connect data centers around the world that are owned by companies like Verizon Communications, the BT Group, the Vodafone Group and Level 3 Communications. In particular, fingers have been pointed at Level 3, the world’s largest so-called Internet backbone provider, whose cables are used by Google and Yahoo.

The Internet companies’ data centers are locked down with full-time security and state-of-the-art surveillance, including heat sensors and iris scanners. But between the data centers — on Level 3’s fiber-optic cables that connected those massive computer farms — information was unencrypted and an easier target for government intercept efforts, according to three people with knowledge of Google’s and Yahoo’s systems who spoke on the condition of anonymity.

It is impossible to say for certain how the N.S.A. managed to get Google and Yahoo’s data without the companies’ knowledge. But both companies, in response to concerns over those vulnerabilities, recently said they were now encrypting data that runs on the cables between their data centers. Microsoft is considering a similar move.

“Everyone was so focused on the N.S.A. secretly getting access to the front door that there was an assumption they weren’t going behind the companies’ backs and tapping data through the back door, too,” said Kevin Werbach, an associate professor at the Wharton School.

Data transmission lines have a long history of being tapped.

As far back as the days of the telegraph, spy agencies have located their operations in proximity to communications companies. Indeed, before the advent of the Internet, the N.S.A. and its predecessors for decades operated listening posts next to the long-distance lines of phone companies to monitor all international voice traffic.

Beginning in the 1960s, a spy operation code-named Echelon targeted the Soviet Union and its allies’ voice, fax and data traffic via satellite, microwave and fiber-optic cables.

In the 1990s, the emergence of the Internet both complicated the task of the intelligence agencies and presented powerful new spying opportunities based on the ability to process vast amounts of computer data.

In 2002, John M. Poindexter, former national security adviser under President Ronald Reagan, proposed the Total Information Awareness plan, an effort to scan the world’s electronic information — including phone calls, emails and financial and travel records. That effort was scrapped in 2003 after a public outcry over potential privacy violations.

The technologies Mr. Poindexter proposed are similar to what became reality years later in N.S.A. surveillance programs like Prism and Bullrun.

The Internet effectively mingled domestic and international communications, erasing the bright line that had been erected to protect against domestic surveillance. Although the Internet is designed to be a highly decentralized system, in practice a small group of backbone providers carry almost all of the network’s data.

The consequences of the centralization and its value for surveillance was revealed in 2006 by Mark Klein, an AT&T technician who described an N.S.A. listening post inside a room at an AT&T switching facility.

The agency was capturing a copy of all the data passing over the telecommunications links and then filtering it in AT&T facilities that housed systems that were able to filter data packets at high speed.

Documents taken by Edward J. Snowden and reported by The Washington Post indicate that, seven years after Mr. Klein first described the N.S.A.’s surveillance technologies, they have been refined and modernized.