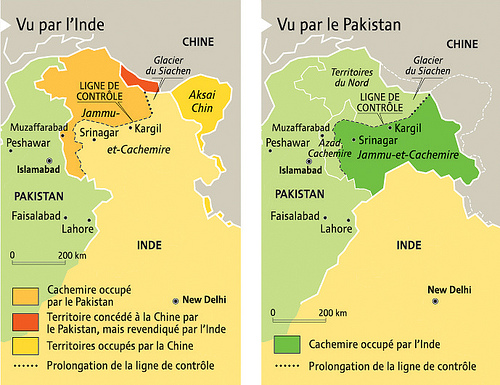 Maps tell us wonderful visual stories on many different levels. They provide an anchor for our exploration of the world; they plot our wars or adventures, they describe our ecosystem and our religious affiliations. Maps help us visualize our food supply, our weather patterns and our trade routes. Maps help us learn about our the travels of our ancestors, and they help us navigate our dream vacations and our retirement locations.

And, our course, in the hands of politicians maps can become tools to inflame nationalism and instigate territorial disputes. A great example of the latter is the map of the Kashmir region in the foothills of the Himalayan Mountains. It is a breathtakingly beautiful part of our planet — sparkling rivers, pristine lakes and soaring peaks. Yet it is also a land ravaged by warring clans of India and Pakistan — each claim pieces as their own. As a result, there is no one map of Kashmir — there are several depending upon your political viewpoint and national affiliation.

Once again Frank Jacobs over at Strange Maps has found another map-based gem, this time leading us through the cartographic turmoil that is Kashmir.

The conflict over Kashmir is decades old, frozen in time, and by now forgotten by most outsiders. Few non-subcontinentals could tell you more about it than this: Kashmir is disputed between India and Pakistan, who each occupy parts of it.

The standard map of the region isn’t very helpful either. Careful not to choose sides, it will show an overabundant mess of boundaries, complicated further by the already difficult terrain: high in the Western Himalayas, Kashmir is a maze of high-altitude peaks, interspersed with fertile valleys. And to top it all off, a third power – China – occupies part of the disputed lands, although that presence is disputed only by India, not by Pakistan.

How did things get so messy? A thumbnail sketch of the conflict:

For British India, the joy of independence in 1947 coincided with the trauma of Partition. In theory, majority-Muslim areas became Pakistan, while regions with a Hindu majority went on to form India. But in each of the nominally independent princely states, the decision rested with the local maharajah. The sovereign of Kashmir, a Sikh ruling a mainly Muslim people, at first tried to go it alone, but called in Indian help to ward off Pakistani incursions.

The assistance came at a price – Kashmir acceded to India, which Pakistan refused to accept. The First Indo-Pakistani War ended in 1949 with the de facto division of Kashmir along a cease-fire line also known as the LoC (Line of Control). India has since reinforced this border with landmines and an electrified fence, with the aim of keeping out terrorists.

But this ‘Berlin Wall of the East’ does not cover the entire distance between the Radcliffe Line and the Chinese border. The Siachen Glacier forms the last, deadliest piece of the puzzle. The 1972 agreement that ended the Third Indo-Pakistani War neglected to extend demarcation of the LoC across the glacier, as it was deemed too inhospitable to be of interest. Yet in 1984, India occupied the area and Pakistan moved to counter, leading to the world’s highest ever battles, fought at 20,000 feet (6,000 m) altitude; most of the over 2,000 casualties in the low-intensity conflict, which was one of the causes of the Fourth Indo-Pakistani War (a.k.a. the Kargil War) in 1999, have died from frostbite or avalanches.

Siachen is the ultimate and most absurd consequence of the geopolitical wrangling over Kashmir. The only reason either side maintains military outposts in the area is the fact that the other side does too. The intransigent overlapping of the Indian and Pakistani claims results, among many other things, in a map, brimming with an overabundance of topographical and political markers.

Could that discouragingly intricate map be a contributing factor to the obscurity of the conflict? If so, then this cartographic double-act will refocus global attention – perhaps bringing a solution closer. Which may be more crucial to world peace than you may think. Shootings across the LoC claim soldiers’ and civilians’ lives on a monthly basis. Each of those incidents could lead to a Fifth Indo-Pakistani War. Which would only be the second time two nuclear powers have engaged in direct military conflict.

Brilliant in its simplicity, and beautiful in its duplicity, the idea behind the two maps below is to isolate each side’s position in the Kashmir conflict on a separate canvas, instead of overlapping them on a single one. By unscrambling both points of view but still presenting them side by side on maps of similar scale and size, the divergences are clarified, yet remain comparable.