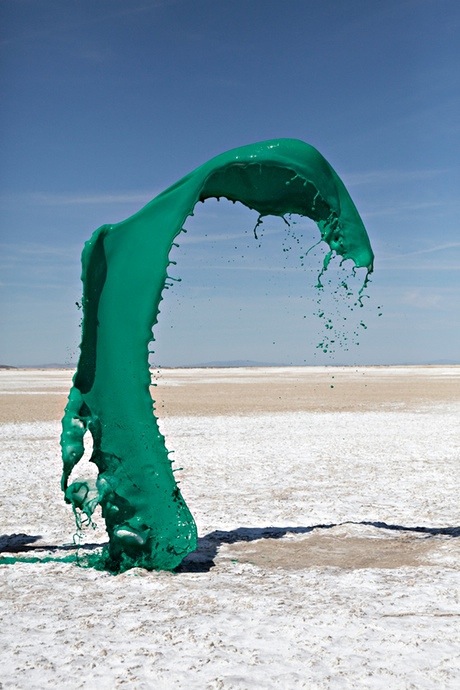 Recent works by artist duo Floto+Warner could be mistaken for a family of bizarrely fluid, alien life-forms, not 3D sculptures of colorful chemicals. While these still images of fluorescent airborne liquids certainly pay homage to Jackson Pollock, they have a unique and playful character all of their own. And, in this case the creative process is just as fascinating as the end result.

Luridly chemical colours hang in the air in the vast wastelands of Nevada in an eye-catching set of pictures by the New York art duo Floto+Warner. To make these images of bright liquids arrested in space, Cassandra and Jeremy Floto threw up cocktails of colour until their camera caught just the splashy, fluid, stilled moments they wanted to record. Apparently, Photoshop is not involved.

These images echo the great modern tradition that pictures motion, energy and flux. “Energy and motion made visible – memories arrested in space,” as Jackson Pollock said of his paintings that he made by dripping, flicking and throwing paint on to canvases laid on the floor. Pollock’s “action paintings” are the obvious source of Floto and Warner’s hurled colours: their photographs are playful riffs on Pollock. And they bring out one of the most startling things about his art: the sense it is still in motion even when it has stopped; the feel of paint being liquid long after it has dried.

Floto and Warner prove that Pollock is still the Great American Artist, 58 years after his death. American art still can’t help echoing him. Works from Robert Smithson’s Spiral Jetty to Andy Warhol’s piss paintings echo his free-ranging exploration of space and his dynamic expansion of the act of drawing.

Yet these images of arrested veils and clouds of colour also echo other attempts to capture living motion. In 1830 to 1831 Hokusai depicted The Great Wave off Kanagawa as a tower of blueness cresting into white foam and about to fall onto the boats helplessly caught in its path. Hokusai’s woodblock print is a decisive moment in the story of art. It takes motion as a topic, and distills its essence in an image at once dynamic and suspended.

Photographers would soon take up Hokusai’s challenge to understand the nature of motion. Famously, Eadweard Muybridge in the late 19th century took strange serial studies of human and animal bodies in motion. Yet the photographer whom Floto+Warner echo most vividly is Harold E Edgerton, who brought the scientific photography of movement into modern times in striking pictures of a foot kicking a ball or a bullet piercing an apple.