Some regions of our planet are home to violent and destructive storms. However, one look at a recent mega-storm on Saturn may put it all in perspective — it could be much, much worse.

Jupiter’s Great Red Spot may get most of the attention, but it’s hardly the only big weather event in the Solar System. Saturn, for example, has an odd hexagonal pattern in the clouds at its north pole, and when the planet tilted enough to illuminate it, the light revealed a giant hurricane embedded in the center of the hexagon. Scientists think the immense storm may have been there for years.

But Saturn is also home to transient storms that show up sporadically. The most notable of these are the Great White Spots, which can persist for months and alter the weather on a planetary scale. Great White Spots are rare, with only six having been observed since 1876. When one formed in 2010, we were lucky enough to have the Cassini orbiter in place to watch it from close up. Even though the head of the storm was roughly 7,000 km across, Cassini’s cameras were able to image it at resolutions where each pixel was only 14 km across, allowing an unprecedented view into the storm’s dynamics.

The storm turned out to be very violent, with convective features as big as 3,000 km across that could form and dissipate in as little as 10 hours. Winds of over 400 km/hour were detected, and the pressure gradient between the storm and the unaffected areas nearby was twice that of the one observed in the Great Red Spot of Jupiter. By carefully mapping the direction of the winds, the authors were able to conclude that the head of the White Spot was an anti-cyclone, with winds orbiting around a central feature.

Convection that brings warm material up from the depths of Saturn’s atmosphere appears to be key to driving these storms. The authors built an atmospheric model that could reproduce the White Spot and found that shutting down the energy injection from the lower atmosphere was enough to kill the storm. In addition, observations suggest that many areas of the storm contain freshly condensed particles, which may represent material that was brought up from the lower atmosphere and then condensed when it reached the cooler upper layers.

The Great White spot was an anticyclone, and the authors’ model suggests that there’s only a very narrow band of winds on Saturn that enable the formation of a Great White Spot. The convective activity won’t trigger a White Spot anywhere outside the range of 31.5° and 32.4°N, which probably goes a long way toward explaining why the storms are so rare.

Image: The huge storm churning through the atmosphere in Saturn’s northern hemisphere overtakes itself as it encircles the planet in this true-color view from NASA’s Cassini spacecraft. Courtesy of NASA/JPL. 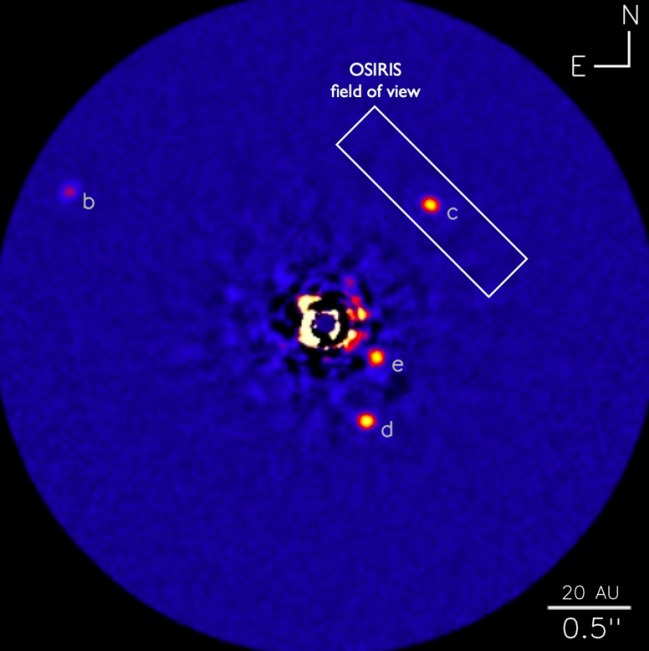 It wasn’t too long ago that astronomers found the first indirect evidence of a planet beyond our solar system. They inferred the presence of an exoplanet (extrasolar planet) from the periodic dimming or wiggle of its parental star, rather than much more difficult direct observation. Since the first confirmed exoplanet was discovered in 1995 (51 Pegasi b), researchers have definitively  catalogued around 800, and identified another 18,000 candidates. And, the list seems to now grow daily.

If that wasn’t amazing enough researchers now have directly observed several exoplanets and even measured their atmospheric composition.

The star system HR 8799 is a sort of Solar System on steroids: a beefier star, four possible planets that are much bigger than Jupiter, and signs of asteroids and cometary bodies, all spread over a bigger region. Additionally, the whole system is younger and hotter, making it one of only a few cases where astronomers can image the planets themselves. However, HR 8799 is very different from our Solar System, as astronomers are realizing thanks to two detailed studies released this week.

The first study was an overview of the four exoplanet candidates, covered by John Timmer. The second set of observations focused on one of the four planet candidates, HR 8799c. Quinn Konopacky, Travis Barman, Bruce Macintosh, and Christian Marois performed a detailed spectral analysis of the atmosphere of the possible exoplanet. They compared their findings to the known properties of a brown dwarf and concluded that they don’t match—it is indeed a young planet. Chemical differences between HR 8799c and its host star led the researchers to conclude the system likely formed in the same way the Solar System did.

The HR 8799 system was one of the first where direct imaging of the exoplanets was possible; in most cases, the evidence for a planet’s presence is indirect. (See the Ars overview of exoplanet science for more.) This serendipity is possible for two major reasons: the system is very young, and the planet candidates orbit far from their host star.

The young age means the bodies orbiting the system still retain heat from their formation and so are glowing in the infrared; older planets emit much less light. That makes it possible to image these planets at these wavelengths. (We mostly image planets in the Solar System using reflected sunlight, but that’s not a viable detection strategy at these distances). A large planet-star separation means that the star’s light doesn’t overwhelm the planets’ warm glow. Astronomers are also assisted by HR 8799’s relative closeness to us—it’s only about 130 light-years away.

However, the brightness of the exoplanet candidates also obscures their identity. They are all much larger than Jupiter—each is more than 5 times Jupiter’s mass, and the largest could be 35 times greater. That, combined with their large infrared emission, could mean that they are not planets but brown dwarfs: star-like objects with insufficient mass to engage in hydrogen fusion. Since brown dwarfs can overlap in size and mass with the largest planets, we haven’t been certain that the objects observed in the HR 8799 system are planets.

For this reason, the two recent studies aimed at measuring the chemistry of these bodies using their spectral emissions. The Palomar study described yesterday provided a broad, big-picture view of the whole HR 8799 system. By contrast, the second study used one of the 10-meter Keck telescopes for a focused, in-depth view of one object: HR 8799c, the second-farthest out of the four.

The researchers measured relatively high levels of carbon monoxide (CO) and water (H2O, just in case you forgot the formula), which were present at levels well above the abundance measured in the spectrum of the host star. According to the researchers, this difference in chemical composition indicated that the planet likely formed via “core accretion”— the gradual, bottom-up accumulation of materials to make a planet—rather than a top-down fragmentation of the disk surrounding the newborn star. The original disk in this scenario would have contained a lot of ice fragments, which merged to make a world relatively high in water content.

In many respects, HR 8799c seemed to have properties between brown dwarfs and other exoplanets, but the chemical and gravitational analyses pushed the object more toward the planet side. In particular, the size and chemistry of HR 8799c placed its surface gravity lower than expected for a brown dwarf, especially when considered with the estimated age of the star system. While this analysis says nothing about whether the other bodies in the system are planets, it does provide further hints about the way the system formed.

One final surprise was the lack of methane (CH4) in HR 8799c’s atmosphere. Methane is a chemical component present in all the Jupiter-like planets in our Solar System. The authors argued that this could be due to vigorous mixing of the atmosphere, which is expected because the exoplanet has higher temperatures and pressures than seen on Jupiter or Neptune. This mixing could enable reactions that limit methane formation. Since the HR 8799 system is much younger than the Solar System—roughly 30 million years compared with 4.5 billion years—it’s uncertain how much this chemical balance may change over time.

[div class=attrib]One of the discovery images of the system obtained at the Keck II telescope using the adaptive optics system and NIRC2 Near-Infrared Imager. The rectangle indicates the field-of-view of the OSIRIS instrument for planet C. Courtesy of NRC-HIA, C. Marois and Keck Observatory.[end-div]

No, Solar tornadoes are not another manifestation of our slowly warming planet. Rather, these phenomena are believed to explain why the outer reaches of the solar atmosphere are so much hotter than its surface.

One of the abiding mysteries surrounding our Sun is understanding how the corona gets so hot. The Sun’s surface, which emits almost all the visible light, is about 5800 Kelvins. The surrounding corona rises to over a million K, but the heating process has not been identified. Most solar physicists suspect the process is magnetic, since the strong magnetic fields at the Sun’s surface drive much of the solar weather (including sunspots, coronal loops, prominences, and mass ejections). However, the diffuse solar atmosphere is magnetically too quiet on the large scales. The recent discovery of atmospheric “tornadoes”—swirls of gas over a thousand kilometers in diameter above the Sun’s surface—may provide a possible answer.

As described in Nature, these vortices occur in the chromosphere (the layer of the Sun’s atmosphere below the corona) and they are common. There are about 10 thousand swirls in evidence at any given time. Sven Wedemeyer-Böhm and colleagues identified the vortices using NASA’s Solar Dynamics Observatory (SDO) spacecraft and the Swedish Solar Telescope (SST). They measured the shape of the swirls as a function of height in the atmosphere, determining they grow wider at higher elevations, with the whole structure aligned above a concentration of the magnetic field on the Sun’s surface. Comparing these observations to computer simulations, the authors determined the vortices could be produced by a magnetic vortex exerting pressure on the gas in the atmosphere, accelerating it along a spiral trajectory up into the corona. Such acceleration could bring about the incredibly high temperatures observed in the Sun’s outer atmosphere.

The Sun’s atmosphere is divided into three major regions: the photosphere, the chromosphere, and the corona. The photosphere is the visible bit of the Sun, what we typically think of as the “surface.” It exhibits the behavior of rising gas and photons from the solar interior, as well as magnetic phenomena such as sunspots. The chromosphere is far less dense but hotter; the corona (“crown”) is still hotter and less dense, making an amorphous cloud around the sphere of the Sun. The chromosphere and corona are not seen without special equipment (except during total solar eclipses), but they can be studied with dedicated solar observatories.

To crack the problem of the super-hot corona, the researchers focused their attention on the chromosphere. Using data from SDO and SST, they measured the motion of various elements in the Sun’s atmosphere (iron, calcium, and helium) via the Doppler effect. These different gases all exhibited vortex behavior, aligned with the same spot on the photosphere. The authors identified 14 vortices during a single 55-minute observing run, which lasted for an average of about 13 minutes. Based on these statistics, they determined the Sun should have at least 11,000 vortices on its surface at any given time, at least during periods of low sunspot activity.

Due to the different wavelengths of light the observers used, they were able to map the shape and speed of the vortices as a function of height in the chromosphere. They found the familiar tornado shape: tapered at the base, widening at the top, reaching diameters of 1500 km. Each vortex was aligned along a single axis over a bright spot in the photosphere, which is the sign of a concentration of magnetic field lines.