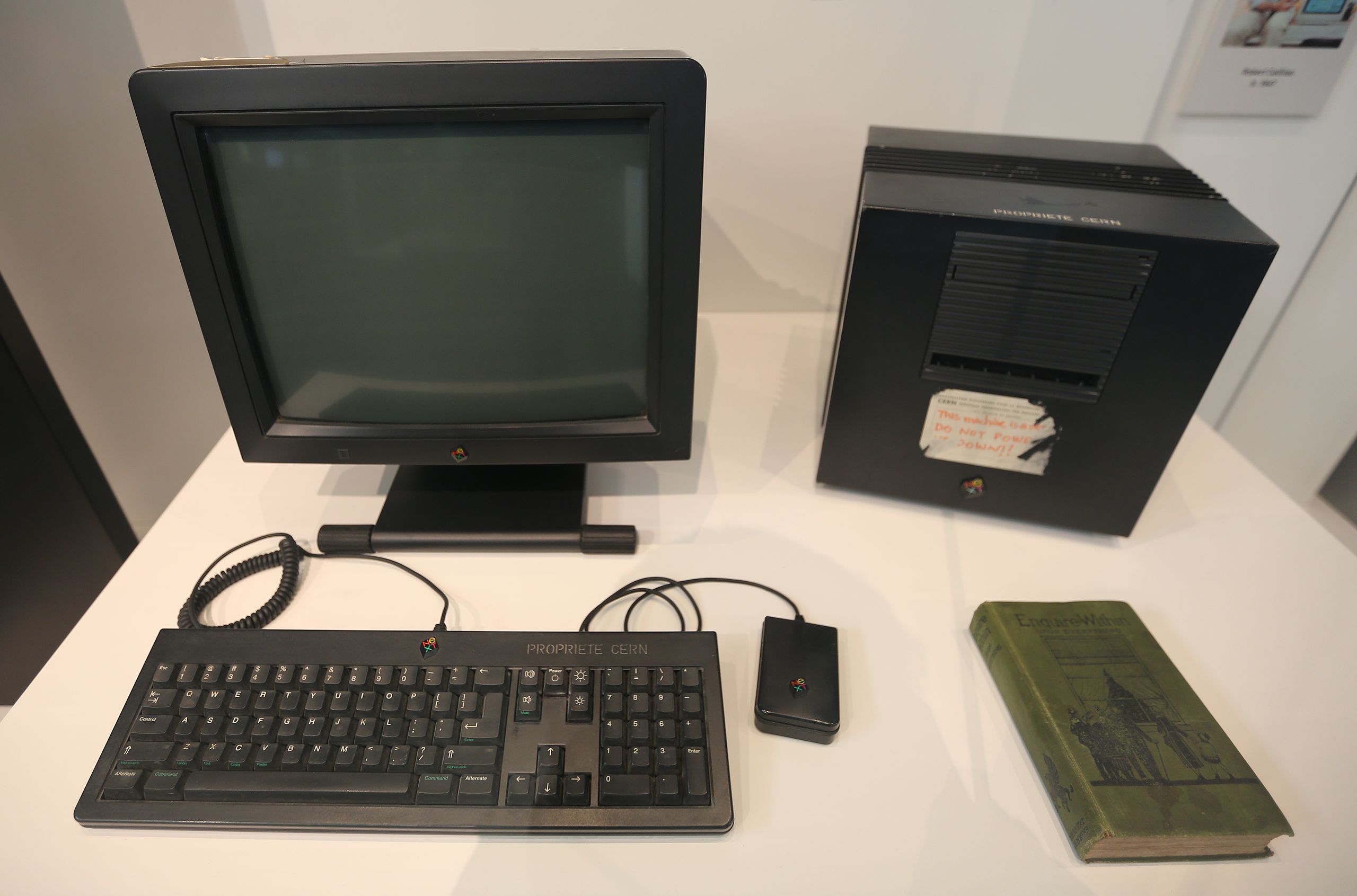 The internet and its user-friendly interface, the World Wide Web (Web), was founded on the principle of openness. The acronym soup of standards, such as TCP/IP, HTTP and HTML, paved the way for unprecedented connectivity and interoperability. Anyone armed with a computer and a connection, adhering to these standards, could now connect and browse and share data with any one else.

This is a simplified view of Sir Tim Berners-Lee vision for the Web in 1989 — the same year that brought us Seinfeld and The Simpsons. Berners-Lee invented the Web. His invention fostered an entire global technological and communications revolution over the next  quarter century.

However, Berners-Lee did something much more important. Rather than keeping the Web to himself and his colleagues, and turning to Silicon Valley to found and fund the next billion dollar startup, he pursued a path to give the ideas and technologies away. Critically, the open standards of the internet and Web enabled countless others to innovate and to profit.

One of the innovators to reap the greatest rewards from this openness is Facebook’s Mark Zuckerberg. Yet, in the ultimate irony, Facebook has turned the Berners-Lee model of openness and permissionless innovation on its head. It’s billion-plus users are members of a private, corporate-controlled walled garden. Innovation, to a large extent, is now limited by the whims of Facebook. Increasingly so, open innovation on the internet is stifled and extinguished by the constraints manufactured and controlled for Facebook’s own ends. This makes Zuckerberg’s vision of making the world “more open and connected” thoroughly laughable.

If there were a Nobel prize for hypocrisy, then its first recipient ought to be Mark Zuckerberg, the Facebook boss. On 23 August, all his 1.7 billion users were greeted by this message: “Celebrating 25 years of connecting people. The web opened up to the world 25 years ago today! We thank Sir Tim Berners-Lee and other internet pioneers for making the world more open and connected.”

Aw, isn’t that nice? From one “pioneer” to another. What a pity, then, that it is a combination of bullshit and hypocrisy. In relation to the former, the guy who invented the web, Tim Berners-Lee, is as mystified by this “anniversary” as everyone else. “Who on earth made up 23 August?” he asked on Twitter. Good question. In fact, as the Guardian pointed out: “If Facebook had asked Berners-Lee, he’d probably have told them what he’s been telling people for years: the web’s 25th birthday already happened, two years ago.”

“In 1989, I delivered a proposal to Cern for the system that went on to become the worldwide web,” he wrote in 2014. It was that year, not this one, that he said we should celebrate as the web’s 25th birthday.

It’s not the inaccuracy that grates, however, but the hypocrisy. Zuckerberg thanks Berners-Lee for “making the world more open and connected”. So do I. What Zuck conveniently omits to mention, though, is that he is embarked upon a commercial project whose sole aim is to make the world more “connected” but less open. Facebook is what we used to call a “walled garden” and now call a silo: a controlled space in which people are allowed to do things that will amuse them while enabling Facebook to monetise their data trails. One network to rule them all. If you wanted a vision of the opposite of the open web, then Facebook is it.

The thing that makes the web distinctive is also what made the internet special, namely that it was designed as an open platform. It was designed to facilitate “permissionless innovation”. If you had a good idea that could be realised using data packets, and possessed the programming skills to write the necessary software, then the internet – and the web – would do it for you, no questions asked. And you didn’t need much in the way of financial resources – or to ask anyone for permission – in order to realise your dream.

An open platform is one on which anyone can build whatever they like. It’s what enabled a young Harvard sophomore, name of Zuckerberg, to take an idea lifted from two nice-but-dim oarsmen, translate it into computer code and launch it on an unsuspecting world. And in the process create an empire of 1.7 billion subjects with apparently limitless revenues. That’s what permissionless innovation is like.

The open web enabled Zuckerberg to do this. But – guess what? – the Facebook founder has no intention of allowing anyone to build anything on his platform that does not have his express approval. Having profited mightily from the openness of the web, in other words, he has kicked away the ladder that elevated him to his current eminence. And the whole thrust of his company’s strategy is to persuade billions of future users that Facebook is the only bit of the internet they really need.

In early 1990 at CERN headquarters in Geneva, Switzerland, Tim Berners-Lee and Robert Cailliau published a formal proposal to build a “Hypertext project” called “WorldWideWeb” as a “web” of “hypertext documents” to be viewed by “browsers”.

Following development work the pair introduced the proposal to a wider audience in December, and on August 6, 1991, 20 years ago, the World Wide Web officially opened for business on the internet. On that day Berners-Lee posted the first web page — a short summary of the World Wide Web project on the alt.hypertext newsgroup.

The page authored by Tim Berners-Lee was http://info.cern.ch/hypertext/WWW/TheProject.html. A later version on the page can be found here. The page described Berners-Lee’s summary of a project for organizing information on a computer network using a web or links. In fact, the the effort was originally coined “Mesh”, but later became the “World Wide Web”.

The first photograph on the web was uploaded by Berners-Lee in 1992, an image of the CERN house band Les Horribles Cernettes. Twenty years on, one website alone — Flickr – hosts around 5.75 billion images.

[div class=attrib]Photograph of Les Horribles Cernettes, the very first photo to be published on the world wide web in 1992. Image courtesy of Cernettes / Silvano de Gennaro. Granted under fair use.[end-div]

theDiagonal doesn’t normally post “newsy” items. So, we are making an exception in this case for two reasons: first, the “web” wasn’t around in 1989 so we wouldn’t have been able to post a news release on our blog announcing its birth; second, in 1989 Tim Berners-Lee’s then manager waved off his proposal with a “Vague, but exciting” annotation, so without the benefit of the hindsight we now have and lacking in foresight that we so desire, we may just have dismissed it. The rest, as they say “is history”.

Web inventor Tim Berners-Lee today returned to the birthplace of his brainchild, 20 years after submitting his paper ‘Information Management: A Proposal’ to his manager Mike Sendall in March 1989. By writing the words ‘Vague, but exciting’ on the document’s cover, and giving Berners-Lee the go-ahead to continue, Sendall signed into existence the information revolution of our time: the World Wide Web. In September the following year, Berners-Lee took delivery of a computer called a NeXT cube, and by December 1990 the Web was up and running, albeit between just a couple of computers at CERN*.

Today’s event takes a look back at some of the early history, and pre-history, of the World Wide Web at CERN, includes a keynote speech from Tim Berners-Lee, and concludes with a series of talks from some of today’s Web pioneers.

“It’s a pleasure to be back at CERN today,” said Berners-Lee. “CERN has come a long way since 1989, and so has the Web, but its roots will always be here.”

The World Wide Web is undoubtedly the most well known spin-off from CERN, but it’s not the only one. Technologies developed at CERN have found applications in domains as varied as solar energy collection and medical imaging.

“When CERN scientists find a technological hurdle in the way of their ambitions, they have a tendency to solve it,” said CERN Director General Rolf Heuer. “I’m pleased to say that the spirit of innovation that allowed Tim Berners-Lee to invent the Web at CERN, and allowed CERN to nurture it, is alive and well today.”