Then airlines jumped on the bandwagon: their cunning ploy to awe us with low fares while simultaneously shocking us with all manner of “ancillary fees”: the checked bag fee, the excess baggage fee, the large baggage fee, the food fee, the drink fee, the ticketing fee, the wifi fee, the check-in early fee, the seat selection fee, the group fee, the fee-fie-fo-fum fee, etc etc.

So, while you may believe that you are a valuable and marketable brand of one, most enterprises actually look upon you something more lowly, but financially attractive — you are nothing more than a cow to be milked, or a landscape to be fracked, of fees. Sadly, this movement towards “personal-fracking” — the monetization and mining of you — has only just entered its early stages. So, hold on tight to your wallet.

Fracking. Could there be a more perfect model for how we’re getting rinsed by this current conspiracy of government and commerce? In a world turned upside down, “conservative” now means the absolute opposite of “leaving things as they are”. Conservative means changing everything. It means dismantling things and selling off the bits. It means drilling into our lives and extracting the marrow.

Conservatism and conservation are now about as far apart as it’s possible to get. Friends of Conservation are the ones protecting the countryside. The ones who stand around self-consciously in terrible fancy dress, holding passive-aggressive placards in praise of the noble, selfless badger. Or basically any mammal that looks good in a waistcoat.

Friends of Conservatism, on the other hand, are the ones who roll up on heavy machinery like a pissed Ukrainian militia. The ones who drill deep beneath that area of local countryside whose only “use” so far has been as a picnic site. And who then pump into the ground powerful jets of high-pressure hydrogunk, splintering rock as easily as a walnut. And who, having sucked up a sky’s worth of valuable gas through a massive crack pipe, then pack up and lumber off to fracture and steal someone else’s underground treasure.

Welcome to capitalism’s late late show. If you can power-hose the last drop of value out of something, you now have an amoral imperative to do it. Fracking is the chief inspiration for today’s entrepreneurs, those “heroic wealth creators” so admired by Andy Pandery Burnham and half the Labour party. Everything is up for grabs now. The age of the racketeer is over. It’s all about fracketeering now.

It’s almost as if the property industry is a pirate economy serviced by unscrupulous thieving bastards drenched in melancholy duty-free fragrances. Let’s face it, estate agents have pretty much perfected the art of taking the piss with a straight face. One former estate agent told me the other day he was always instructed to make admin fees “whatever you think you can get away with … go high, then drop as a favour”. Classic surcharge frackery.

I had decided that of all the agents – sports, double, biological – estate agents were definitely the worst. Then I asked people on Twitter how they had been fracked over lately and they reminded me about letting agents. And about how every single person I’ve ever known who has had any dealings with a letting agent has had to recalibrate their view of the human race as a result. Has anyone ever got their exorbitant deposit back in full without an exhausting argument pointing out that three years of normal wear and tear can’t be classed as catastrophic damage? I’ve been hearing about people being charged a £90-per-person “reference fee” when moving between two properties run by the same agent, “so that’s £180 to ask themselves how we were as tenants”. Or being charged £50 for printing six pages of a rental contract. “I asked them to email it so I could print it. They said no.”

The world of fracketeering is infinitely flexible and contradictory. Buy tickets online and you could be charged an admin fee for an attachment that requires you to print them at home. The original online booking fee – you’ve come this far in the buying process, hand over an extra 12 quid now or write off the previous 20 minutes of your life – has mutated into exotic versions of itself.

The confirmation fee. The convenience fee. Someone who bought tickets for a tennis event at the O2 sent me this pithy tweet: “4 tickets. 4 Facility Fees + 4 Service Charge + 1 Standard Mail £2.75 = 15% of overall £!”. Definitely a grand slam.

It’s amazing to think of a world that existed before the admin charge. It almost makes you nostalgic for a simpler and more innocent time, when racketeers would work out what it was we wanted and then supply it at an inflated price. You remember racketeers. Snappy dressers, little moustaches, connections to organised crime. Some of them did very well and went on to become successful publishers or peers of the realm. Quite a few old-school racketeers went into the “hospitality and leisure” business, where these days fracking is in full effect. 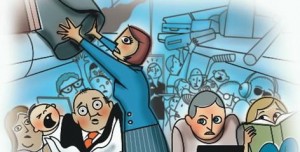 For flyers, finding adequate space in the overhead bin or under the seat in front, for that increasingly small carry-on item, is one of the most stressful stages of any flight. For airlines, it’s become the next competitive battleground, one that yields significant revenues, at little cost.

So, next time you fly with a dead catfish, kitchen sink or archery set, keep in mind that airlines may want you sitting comfortably, but they want your money much more.

A frosted cake. A 10-gallon hat. A car muffler.

People have crammed all sorts of things — including a kitchen sink — into airplane overhead compartments.

But now the battle of the bins, that preflight scrum over precious carry-on space, has turned into something else for airlines: the business of the bins.

After starting to charge fees for checking baggage, airlines are finding new ways to make money from carry-ons. Overhead compartments, it turns out, are valuable real estate — and these days, they go to the highest bidders.

Using an airline credit card? Come on down. Flying first class? Right this way. Paying an extra fee when you book? It’s your turn. Priority is increasingly given to those who pay.

“There are multiple ways you can improve upon your boarding zone,” said Andy Jacobs, the president of a candy company who travels about twice a month. “As a diamond member on Delta, I never have a problem securing space.”

Many travelers may not realize it, but a seat ticket does not automatically entitle them to overhead space. Once space runs out, passengers must check their luggage at the gate, without paying a fee — and then wait for it at the baggage claim at their destination. Airlines are capitalizing on the fact that many fliers are willing to pay for carry-on convenience.

When Mr. Jacobs is not flying Delta, he relies on credit cards to jump to the front of the boarding line. “Those cards are worth it,” he said. “I actually carry three different airline affinity credit cards.”

He has good reason to get to the front. “As a chocolate salesperson, I need to bring my bags on the plane so the chocolate won’t melt,” he said. “When you’re flying to a major customer and you pick up your bags at baggage claim and your samples are melted, that becomes a pretty big problem.”

As Mr. Jacobs has learned, there is only so much room.

And there is little chance that the free-for-all at check-in will ease soon. Airlines rely increasingly on fees, experts say. In 2012, domestic carriers collectively earned roughly $3.5 billion in checked-bag fees, up from less than half a billion dollars five years earlier, according to the Department of Transportation. Although exact figures are not yet available for early boarding revenue, analysts say it is increasing.

“There is growth there,” said Jay Sorenson, president of the airline consulting firm IdeaWorksCompany. “Airlines will implement more of these fees.”

“When someone gets to their row and looks up and sees something’s there, they kind of freak out about it,” he said. “They will throw a fit and they will start screaming at whoever put their stuff in their spot. We’ve had to throw people off the plane just because they refused to walk up a few feet and stick it in another overhead bin.”

People will carry on anything and everything, Mr. Easley said. On one flight to the Dominican Republic, a passenger brought a kitchen sink wrapped in a trash bag. “Luckily, at the time we were flying this particular Airbus that just has a ton of overhead bin space.”

Another time on the same route, a passenger carried on a car muffler. “I think in that case we did put it in a closet, next to a hula hoop someone had brought,” he said.

Airlines say they are providing an option travelers want.

“It’s something our customers desire,” said an American Airlines spokesman, Matt Miller. Charlie Hobart, a United Airlines spokesman, said, “We’re always looking for ways to make travel more convenient for our customers.” United let customers pay for priority boarding before its merger with Continental and reintroduced it this year. “Customers did enjoy it when we had it” before the merger, Mr. Hobart said.