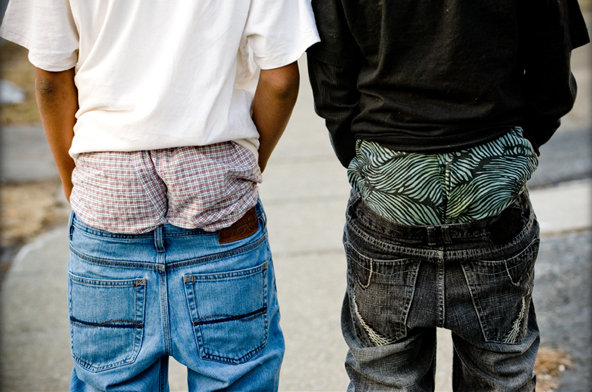 Living in the West we are generally at liberty to wear what we wish, certainly in private, and usually in public — subject to public norms of course. That said, one can make a good case for punishing offenders of all genders who enact “crimes of fashion”.

One of the lesser-known effects of the double-dip recession is that young men have been unable to afford belts. All over the Western world we have had to witness exposed bottoms, thanks to lack of funds to pop out and buy a belt or a pair of braces, although many people have tried to convince me that this is actually a conscious “fashion’” choice.

A town in Louisiana has fought back against this practice and is now imposing fines for those who choose to fly their trousers at half-mast.  What a shame this new law is, as these poor chaps are exactly that – poor.  They can’t afford a belt!  Fining them isn’t going to help their finances, is it?

These weird people who try to tell me boys actually choose to wear their trousers in this style have said that it harks back to the American prisons, when fashion accessories such as belts were whipped off the inmates in case they did anything foolish with them.  Like wearing a brown one with black shoes.

There is also a school of thought that showing the posterior was a sign to others that you were open to “advances”.  I cited this to a group of boys at a leading school recently and the look of horror that came over their faces was interesting to note.

It’s not just the chaps and belt-makers that are suffering from this recession. Women seem to be unable to afford tops that cover their bra straps. You only have to walk down any high street: you may as well be in a lingerie department.  Showing your underwear is clearly a sign that you are poor – in need of charity, sympathy and probably state-funded assistance.

To play devil’s advocate for one second, say these economic sufferers are actually making a conscious choice to show the rest of us their pants, then maybe Louisiana has the right idea. Fines are perhaps the best way to go. Here is a suggested menu of fines, which you’ll be pleased to know I have submitted to local councils the length and breadth of the nation.