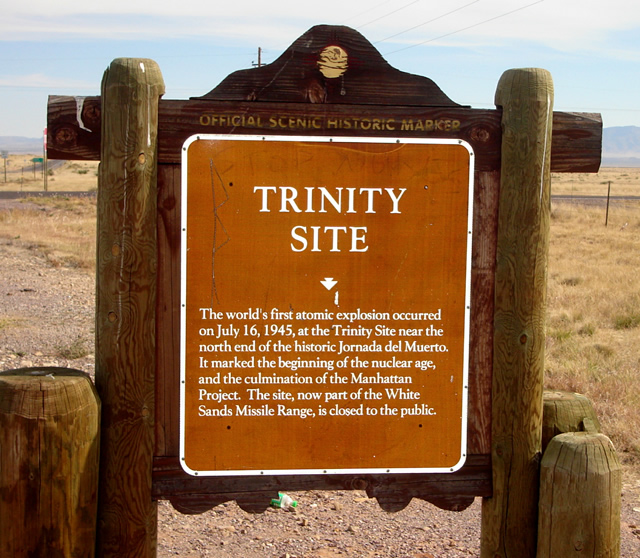 Sixty-six years ago on July 16, 1945 the world witnessed the first atomic bomb test. The bomb lit up the sky and scorched the earth at the White Sands Proving Ground over the Jornada del Muerto desert in New Mexico. The test of the implosion-design plutonium device was codenamed Trinity, part of the Manhattan Project.

Batter my heart, three-personed God; for you
As yet but knock, breathe, shine, and seek to mend;
That I may rise and stand, o’erthrow me, and bend
Your force to break, blow, burn, and make me new.
I, like an usurped town, to another due,
Labor to admit you, but O, to no end;
Reason, your viceroy in me, me should defend,
but is captived, and proves weak or untrue.
yet dearly I love you, and would be loved fain,
But am betrothed unto your enemy.
Divorce me, untie or break that knot again;
Take me to you, imprison me, for I,
Except you enthrall me, never shall be free,
Nor even chaste, except you ravish me.

As noted in the Barnes and Noble Review:

Biographies of Oppenheimer portray him as a complex, contradicted man, and something of a poet himself. His love of poetry became well known when, in a 1965 interview, he famously claimed that his first reaction to the bomb test was a recollection of a line from the Bhagavad-Gita: “Now I am become death, the destroyer of worlds.”