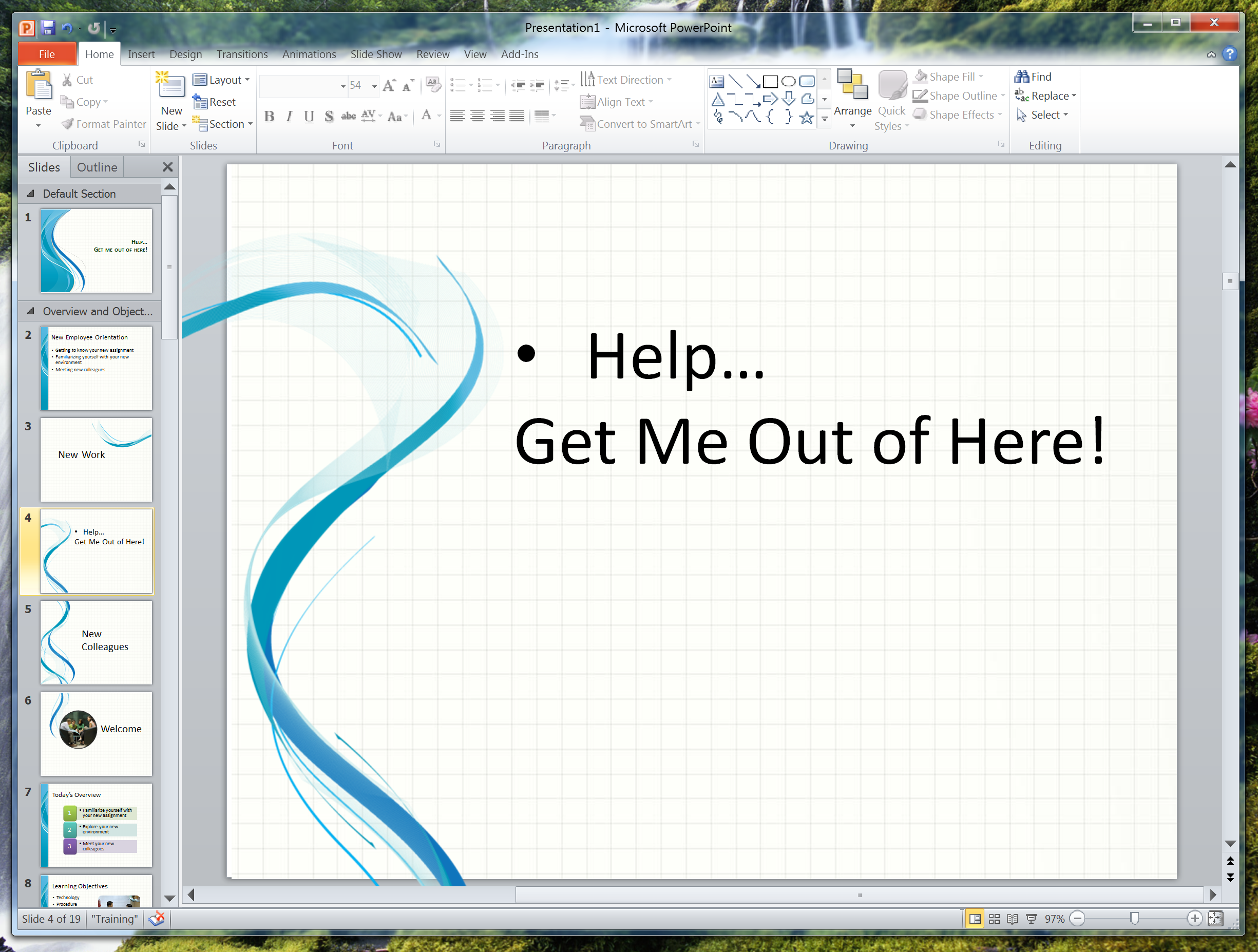 It may not be beyond the realm of fantasy to imagine a day in the not too distant future when PowerPoint Karaoke features as an olympic sport. Ugh!

Without a doubt karaoke has set human culture back at least a thousand years (thanks Japan). And, Powerpoint has singlehandedly dealt killer blows to creativity, deep thought and literary progress (thanks Microsoft). Surely, combining these two banes of modern society into a competitive event is the stuff of true horror. But, this hasn’t stopped the activity from becoming a burgeoning improv phenomenon for corporate hacks — validating the trend in which humans continue making fools of themselves. After all, it must be big — and there’s probably money in it — if the WSJ is reporting on it.

On a sunny Friday afternoon earlier this month, about 100 employees of Adobe Systems Inc. filed expectantly into an auditorium to watch PowerPoint presentations.

“I am really thrilled to be here today,” began Kimberley Chambers, a 37-year-old communications manager for the software company, as she nervously clutched a microphone. “I want to talk you through…my experience with whales, in both my personal and professional life.”

Co-workers giggled. Ms. Chambers glanced behind her, where a PowerPoint slide displayed four ink sketches of bare-chested male torsos, each with a distinct pattern of chest hair. The giggles became guffaws. “What you might not know,” she continued, “is that whales can be uniquely identified by a number of different characteristics, not the least of which is body hair.”

Ms. Chambers, sporting a black blazer and her employee ID badge, hadn’t seen this slide in advance, nor the five others that popped up as she clicked her remote control. To accompany the slides, she gave a nine-minute impromptu talk about whales, a topic she was handed 30 seconds earlier.

Forums like this at Adobe, called “PowerPoint karaoke” or “battle decks,” are cropping up as a way for office workers of the world to mock an oppressor, the ubiquitous PowerPoint presentation. The mix of improvised comedy and corporate-culture takedown is based on a simple notion: Many PowerPoint presentations are unintentional parody already, so why not go all the way?

Library associations in Texas and California held PowerPoint karaoke sessions at their annual conferences. At a Wal-Mart StoresInc. event last year, workers gave fake talks based on real slides from a meatpacking supplier. Twitter Inc. Chief Executive Dick Costolo, armed with his training from comedy troupe Second City, has faced off with employees at “battle decks” contests during company meetings.

One veteran corporate satirist gives these events a thumbs up. “Riffing off of PowerPoints without knowing what your next slide is going to be? The humorist in me says it’s kinda brilliant,” said “Dilbert” cartoonist Scott Adams, who has spent 26 years training his jaundiced eye on office work. “I assume this game requires drinking?” he asked. (Drinking is technically not required, but it is common.)

Mr. Adams, who worked for years at a bank and at a telephone company, said PowerPoint is popular because it offers a rare dose of autonomy in cubicle culture. But it often bores, because creators lose sight of their mission. “If you just look at a page and drag things around and play with fonts, you think you’re a genius and you’re in full control of your world,” he said.

At a February PowerPoint karaoke show in San Francisco, contestants were given pairings of topics and slides ranging from a self-help seminar for people who abuse Amazon Prime, with slides including a dog balancing a stack of pancakes on its nose, to a sermon on “Fifty Shades of Grey,” with slides including a pyramid dotted with blocks of numbers. Another had to explain the dating app Tinder to aliens invading the Earth, accompanied by a slide of old floppy disk drives, among other things.

Read and sing-a-long to the entire article here.