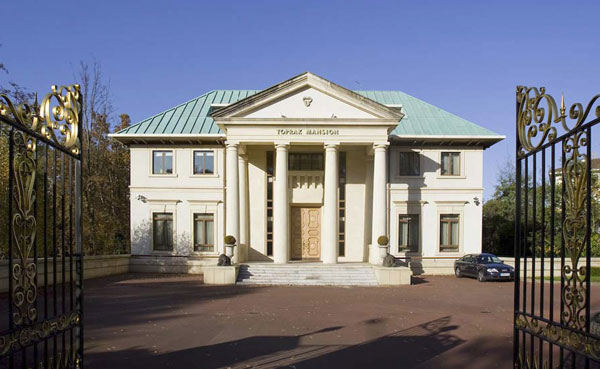 Not far from London’s beautiful Hampstead Heath lies The Bishops Avenue. From the 1930s until the mid-1970s this mile-long street became the archetypal symbol for new wealth; the nouveau riche millionaires made this the most sought after — and well-known — address for residential property in the nation (of course “old money” still preferred its stately mansions and castles). But since then, The Bishops Avenue has changed, with many properties now in the hands of billionaires, hedge fund investors and oil rich plutocrats.

You can tell when a property is out of your price bracket if the estate agent’s particulars come not on a sheet of A4 but are presented in a 50-page hardback coffee-table book, with a separate section for the staff quarters.

Other giveaway signs, in case you were in any doubt, are the fact the lift is leather-lined, there are 62 internal CCTV cameras, a private cinema, an indoor swimming pool, sauna, steam room, and a series of dressing rooms – “for both summer and winter”, the estate agent informs me – which are larger than many central London flats.

But then any property on The Bishops Avenue in north London is out of most people’s price bracket – such as number 62, otherwise known as Jersey House, which is on the market for £38 million. I am being shown around by Grant Alexson, from Knight Frank estate agents, both of us in our socks to ensure that we do not grubby the miles of carpets or marble floors in the bathrooms (all of which have televisions set into the walls).

My hopes of picking up a knock-down bargain had been raised after the news this week that one property on The Bishops Avenue, Dryades, had been repossessed. The owners, the family of the former Pakistan privatisation minister Waqar Ahmed Khan, were unable to settle a row with their lender, Deutsche Bank.

It is not the only property in the hands of the receivers on this mile-long stretch. One was tied up in a Lehman Brothers property portfolio and remains boarded up. Meanwhile, the Saudi royal family, which bought 10 properties during the First Gulf War as boltholes in case Saddam Hussein invaded, has offloaded the entire package for a reported £80 million in recent weeks. And the most expensive property on the market, Heath Hall, had £35 million knocked off the asking price (taking it down to a mere £65 million).

This has all thrown the spotlight once again on this strange road, which has been nicknamed “Millionaires’ Row” since the 1930s – when a million meant something. Now, it is called “Billionaires’ Row”. It was designed, from its earliest days, to be home to the very wealthy. One of the first inhabitants was George Sainsbury, son of the supermarket founder; another was William Lyle, who used his sugar fortune to build a vast mansion in the Arts and Crafts style. Stars such as Gracie Fields also lived here.

But between the wars, the road became the butt of Music Hall comedians who joked about it being full of “des-reses” for the nouveaux riches such as Billy Butlin. Evelyn Waugh, the master of social nuance, made sure his swaggering newspaper baron Lord Copper of Scoop resided here. It was the 1970s, however, that saw the road vault from being home to millionaires to a pleasure ground for international plutocrats, who used their shipping or oil wealth to snap up properties, knock them down and build monstrous mansions in “Hollywood Tudor” style. Worse were the pastiches of Classical temples, the most notorious of which was built by the Turkish industrialist Halis Toprak, who decided the bath big enough to fit 20 people was not enough of a statement. So he slapped “Toprak Mansion” on the portico (causing locals to dub it “Top Whack Mansion”). It was sold a couple of years ago to the Kazakhstani billionairess Horelma Peramam, who renamed it Royal Mansion.

Perhaps the most famous of recent inhabitants was Lakshmi Mittal, the steel magnate, and for a long time Britain’s richest man. But he sold Summer Palace, for £38 million in 2011 to move to the much grander Kensington Palace Gardens, in the heart of London. The cast list became even more varied with the arrival of Salman Rushdie who hid behind bullet-proof glass and tycoon Asil Nadir, whose address is now HM Belmarsh Prison.

Of course, you can be hard-pressed to discover who owns these properties or how much anyone paid. These are not run-of-the-mill transactions between families moving home. Official Land Registry records reveal a complex web of deals between offshore companies. Miss Peramam holds Royal Mansion in the name of Hartwood Resources Company, registered in the British Virgin Islands, and the records suggest she paid closer to £40 million than the £50 million reported.

Alexson says the complexity of the deals are not just about avoiding stamp duty (which is now at 7 per cent for properties over £2 million). “Discretion first, tax second,” he argues. “Look, some of the Middle Eastern families own £500 billion. Stamp duty is not an issue for them.” Still, new tax rules this year, which increase stamp duty to 15 per cent if the property is bought through an offshore vehicle, have had an effect, according to Alexson, who says that the last five houses he sold have been bought by an individual, not a company.

But there is little sign of these individuals on the road itself. Walking down the main stretch of the Avenue from the beautiful Hampstead Heath to the booming A1, which bisects the road, more than 10 of these 39 houses are either boarded up or in a state of severe disrepair. Behind the high gates and walls, moss and weeds climb over the balustrades. Many others are clearly uninhabited, except for a crew of builders and a security guard. (Barnet council defends all the building work it has sanctioned, with Alexson pointing out that the new developments are invariably rectifying the worst atrocities of the 1980s.)

Forget Warren Buffet, Bill Gates and Carlos Slim or the Russian oligarchs and the emirs of the Persian Gulf. These guys are merely multi-billionaires. Their fortunes — combined — account for less than half of 1 percent of the net worth of Dennis Hope, the world’s first trillionaire. In fact, you could describe Dennis as the solar system’s first trillionaire, with an estimated wealth of $100 trillion.

So, why have you never heard of Dennis Hope, trillionaire? Where does he invest his money? And, how did he amass this jaw-dropping uber-fortune? The answer to the first question is that he lives a relatively ordinary and quiet life in Nevada. The answer to the second question is: property. The answer to the third, and most fascinating question: well, he owns most of the Moon. He also owns the majority of the planets Mars, Venus and Mercury, and 90 or so other celestial plots. You too could become an interplanetary property investor for the starting and very modest sum of $19.99. Please write your check to… Dennis Hope.

The New York Times has a recent story and documentary on Mr.Hope, here.

Dennis Hope, self-proclaimed Head Cheese of the Lunar Embassy, will promise you the moon. Or at least a piece of it. Since 1980, Hope has raked in over $9 million selling acres of lunar real estate for $19.99 a pop. So far, 4.25 million people have purchased a piece of the moon, including celebrities like Barbara Walters, George Lucas, Ronald Reagan, and even the first President Bush. Hope says he exploited a loophole in the 1967 United Nations Outer Space Treaty, which prohibits nations from owning the moon.

Because the law says nothing about individual holders, he says, his claim—which he sent to the United Nations—has some clout. “It was unowned land,” he says. “For private property claims, 197 countries at one time or another had a basis by which private citizens could make claims on land and not make payment. There are no standardized rules.”

Hope is right that the rules are somewhat murky—both Japan and the United States have plans for moon colonies—and lunar property ownership might be a powder keg waiting to spark. But Ram Jakhu, law professor at the Institute of Air and Space Law at McGill University in Montreal, says that Hope’s claims aren’t likely to hold much weight. Nor, for that matter, would any nation’s. “I don’t see a loophole,” Jakhu says. “The moon is a common property of the international community, so individuals and states cannot own it. That’s very clear in the U.N. treaty. Individuals’ rights cannot prevail over the rights and obligations of a state.”

Jakhu, a director of the International Institute for Space Law, believes that entrepreneurs like Hope have misread the treaty and that the 1967 legislation came about to block property claims in outer space. Historically, “the ownership of private property has been a major cause of war,” he says. “No one owns the moon. No one can own any property in outer space.”

Hope refuses to be discouraged. And he’s focusing on expansion. “I own about 95 different planetary bodies,” he says. “The total amount of property I currently own is about 7 trillion acres. The value of that property is about $100 trillion. And that doesn’t even include mineral rights.”