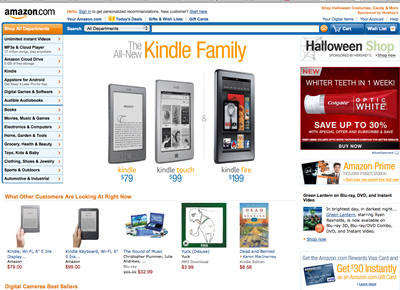 In another sign of Amazon’s unquenchable thirst for all things commerce, the company is now moving more aggressively into publishing.

Amazon.com has taught readers that they do not need bookstores. Now it is encouraging writers to cast aside their publishers.

Amazon will publish 122 books this fall in an array of genres, in both physical and e-book form. It is a striking acceleration of the retailer’s fledging publishing program that will place Amazon squarely in competition with the New York houses that are also its most prominent suppliers.

It has set up a flagship line run by a publishing veteran, Laurence Kirshbaum, to bring out brand-name fiction and nonfiction. It signed its first deal with the self-help author Tim Ferriss. Last week it announced a memoir by the actress and director Penny Marshall, for which it paid $800,000, a person with direct knowledge of the deal said.

Publishers say Amazon is aggressively wooing some of their top authors. And the company is gnawing away at the services that publishers, critics and agents used to provide.

Several large publishers declined to speak on the record about Amazon’s efforts. “Publishers are terrified and don’t know what to do,” said Dennis Loy Johnson of Melville House, who is known for speaking his mind.

“Everyone’s afraid of Amazon,” said Richard Curtis, a longtime agent who is also an e-book publisher. “If you’re a bookstore, Amazon has been in competition with you for some time. If you’re a publisher, one day you wake up and Amazon is competing with you too. And if you’re an agent, Amazon may be stealing your lunch because it is offering authors the opportunity to publish directly and cut you out.