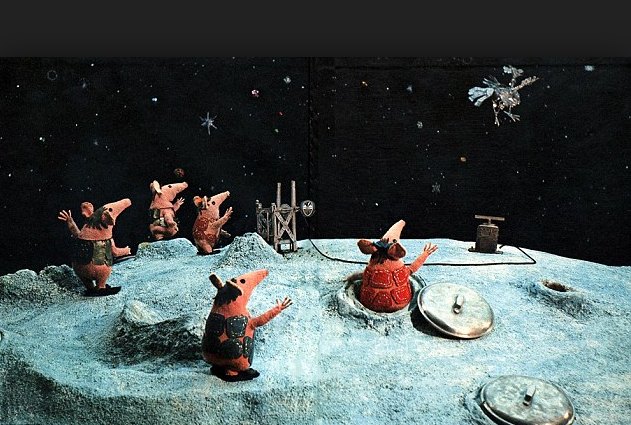 Thirteen private companies recently met in New York city to present their plans and ideas for their commercial space operations. Ranging from space tourism to private exploration of the Moon and asteroid mining the companies gathered at the Explorers Club to herald a new phase of human exploration.

It was a rare meeting of minds. Representatives from 13 commercial space companies gathered on May 1 at a place dedicated to going where few have gone before: the Explorers Club in New York.

Amid the mansions and high-end apartment buildings just off Central Park, executives from space-tourism companies, rocket-making startups, and even a business that hopes to make money by mining asteroids for useful materials showed off displays and gave presentations.

The Explorers Club event provided a snapshot of what may be a new industry in the making. In an era when NASA no longer operates manned space missions and government funding for unmanned missions is tight, a host of startups—most funded by space enthusiasts with very deep pockets—have stepped up in hope of filling the gap. In the past few years, several have proved themselves. Elon Musk’s SpaceX, for example, delivers cargo to the International Space Station for NASA. Both Richard Branson’s Virgin Galactic and rocket-plane builder XCOR Aerospace plan to perform demonstrations this year that will help catapult commercial spaceflight from the fringe into the mainstream.

The advancements being made by space companies could matter to more than the few who can afford tickets to space. SpaceX has already shaken incumbents in the $190 billion satellite launch industry by offering cheaper rides into space for communications, mapping, and research satellites.

However, space tourism also looks set to become significantly cheaper. “People don’t have to actually go up for it to impact them,” says David Mindell, an MIT professor of aeronautics and astronautics and a specialist in the history of engineering. “At $200,000 you’ll have a lot more ‘space people’ running around, and over time that could have a big impact.” One direct result, says Mindell, may be increased public support for human spaceflight, especially “when everyone knows someone who’s been into space.”

Along with reporters, Explorer Club members, and members of the public who had paid the $75 to $150 entry fee, several former NASA astronauts were in attendance to lend their endorsements—including the MC for the evening, Michael López-Alegría, veteran of the space shuttle and the ISS. Also on hand, highlighting the changing times with his very presence, was the world’s first second-generation astronaut, Richard Garriott. Garriott’s father flew missions on Skylab and the space shuttle in the 1970s and 1980s, respectively. However, Garriott paid his own way to the International Space Station in 2008 as a private citizen.

The evening was a whirlwind of activity, with customer testimonials and rapid-fire displays of rocket launches, spacecraft in orbit, and space ships under construction and being tested. It all painted a picture of an industry on the move, with multiple companies offering services from suborbital experiences and research opportunities to flights to Earth orbit and beyond.

The event also offered a glimpse at the plans of several key players.

Lauren De Niro Pipher, head of astronaut relations at Virgin Galactic, revealed that the company’s founder plans to fly with his family aboard the Virgin Galactic SpaceShipTwo rocket plane in November or December of this year. The flight will launch the company’s suborbital spaceflight business, for which De Niro Pipher said more than 700 customers have so far put down deposits on tickets costing $200,000 to $250,000.

The director of business development for Blue Origin, Bretton Alexander, announced his company’s intention to begin test flights of its first full-scale vehicle within the next year. “We have not publicly started selling rides in space as others have,” said Alexander during his question-and-answer session. “But that is our plan to do that, and we look forward to doing that, hopefully soon.”

Blue Origin is perhaps the most secretive of the commercial spaceflight companies, typically revealing little of its progress toward the services it plans to offer: suborbital manned spaceflight and, later, orbital flight. Like Virgin, it was founded by a wealthy entrepreneur, in this case Amazon founder Jeff Bezos. The company, which is headquartered in Kent, Washington, has so far conducted at least one supersonic test flight and a test of its escape rocket system, both at its West Texas test center.

Also on hand was the head of Planetary Resources, Chris Lewicki, a former spacecraft engineer and manager for Mars programs at NASA. He showed off a prototype of his company’s Arkyd 100, an asteroid-hunting space telescope the size of a toaster oven. If all goes according to plan, a fleet of Arkyd 100s will first scan the skies from Earth orbit in search of nearby asteroids that might be rich in mineral wealth and water, to be visited by the next generation of Arkyd probes. Water is potentially valuable for future space-based enterprises as rocket fuel (split into its constituent elements of hydrogen and oxygen) and for use in life support systems. Planetary Resources plans to “launch early, launch often,” Lewicki told me after his presentation. To that end, the company is building a series of CubeSat-size spacecraft dubbed Arkyd 3s, to be launched from the International Space Station by the end of this year.

Andrew Antonio, experience manager at a relatively new company, World View Enterprises, showed a computer-generated video of his company’s planned balloon flights to the edge of space. A manned capsule will ascend to 100,000 feet, or about 20 miles up, from which the curvature of Earth and the black sky of space are visible. At $75,000 per ticket (reduced to $65,000 for Explorers Club members), the flight will be more affordable than competing rocket-powered suborbital experiences but won’t go as high. Antonio said his company plans to launch a small test vehicle “in about a month.”

XCOR’s director of payload sales and operations, Khaki Rodway, showed video clips of the company’s Lynx suborbital rocket plane coming together in Mojave, California, as well as a profile of an XCOR spaceflight customer. Hangared just down the flight line at the same air and space port where Virgin Galactic’s SpaceShipTwo is undergoing flight testing, the Lynx offers seating for one paying customer per flight at $95,000. XCOR hopes the Lynx will begin flying by the end of this year.