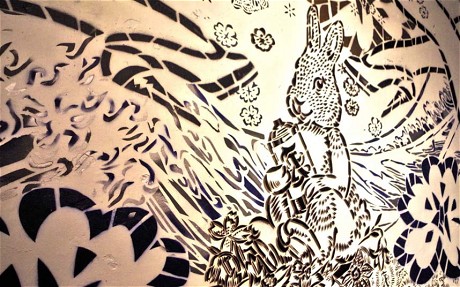 Merits or not aside, graffiti is usually associated with men, and until recently those men would have been disaffected, urban youth, and graffiti would have been looked down upon as a fringe anti-establishment pseudo-art form.

More recently, pop culture embraced it, and even the staid art establishment yielded and finally welcomed graffiti as an official vehicle for serious artistic self-expression. Of course, this was mostly driven by money — witness the pilfering and subsequent auctioning of works by Banksy and some of his lesser-known peers. Thus, it is now big business.

But now come the women, and not a moment too soon. Perhaps, they will help rescue it from the money-obsessed establishment and return it to its expressive, contra-cultural roots.

When Aiko Nakagawa speaks, she looks down at her paint-spattered hands. Her nails are varnished a shiny silver, each is adorned with a tiny black crucifix. They’re a little chipped. “It’s hard being a girl and a graffiti artist”, she sighs.As one of the world’s leading practitioners of street art, 38-year-old Nakagawa – who was born in Japan but now lives in Brooklyn, New York – is something of a rarity. The leading figures of international street art may work almost exclusively under aliases (Nakagawa goes by the moniker Lady Aiko or, simply, Aiko) but it is no secret that the overwhelming majority of them are men.

Over the past few decades, street art has gone from a niche, underground artform to a multi-million dollar industry; at the top of the market, original works by Bristolian Banksy are sold in major auction houses for five and six-figure sums. Martha Cooper, an American photojournalist who began documenting graffiti on subway trains and in the Lower East Side of New York in the Seventies and Eighties, was instrumental in bringing street art into the mainstream consciousness. When her book, Subway Art, was published in 1984 it became known as the Bible of Street Art.

Having witnessed the scene from its infancy, Cooper still laments its gender inequality. “I wish there were more female artists and I have no idea why the number of women is so tiny,” she tells me. “because the one thing you can say about the movement is that it is democratic. It is open to anyone who wants to take the time and energy and effort.

Women have been painting the street since the beginning, although there are few contemporary photographs of them and Cooper admits she regrets “not making more of an effort to track them down at the time”. To make up for lost time, Cooper, now 70, has thrown herself into the promotion of women in street art, arranging events and publishing books on the subject. “I want to celebrate the women who have, on their own, gotten into it, with the hope that they would be role models for younger generations of girls that might be contemplating doing some of these things but feeling that the doors are closed,” she says.I meet both Cooper and Nakagawa in the Norwegian town of Stavenger which is hosting Nuart, an international street art festival held annually since 2001.

Cooper is exhibiting a selection of her photography while Nakagawa is creating a new mural in her signature style: joyfully, subversively feminine and heavily inspired by 18th century Japanese woodblock printing, which she sees as a precursor to street art, in the sense that it was a practice adopted by the untrained working classes.

Nakagawa’s intricate stencil work dominates two walls of one of the five tunnels underneath TouScene, and depicts a dozen strong, scantily-clad women, silhouettes and angels surrounded by a rabbit holding a spray can, butterflies, Mount Fuji and flowers. “I think I represent female energy through my work,” she explains, “while at the beginning it was tough, I like the fact I am a woman in a boy’s world. I might need an extra step on the ladder [Aiko stands at 152cm] but I can still do it.” In 2012, she became the first woman to paint on the Bowery Wall, Manhattan’s legendary street art spot, with a piece entitled Here’s Fun For Everyone.

Among the 11 artists taking part in Nuart this year, three are women. In addition to Cooper and Nakagawa, there is Faith47, a South African artist who prefers not to disclose her real name and whose murals have been displayed around the world for 15 years. When I ask her about the role gender plays in her work, she will say only that she “doesn’t let [herself] get distracted by that.