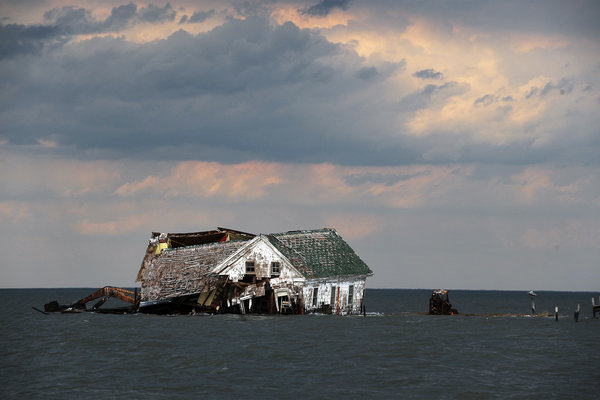 The rise in the global sea level is not a disputable fact, as some would still have you believe. The sea level is rising and it is rising faster. It is a fact backed by evidence. Period. This fact has been established through continuous, independent and corroborated scientific studies in many nations across all continents by thousands of scientists.

And, as the oceans rise communities that touch the water face increasing threats. A growing number of areas now have to plan and prepare for more frequent and more prolonged tidal erosion and storm surges. Worse still, some communities, in increasing numbers, have to confront the prospect of complete resettlement caused by the real danger of prolonged and irreversible flooding. Today it may be some of the low lying areas of Norfolk, Virginia or a remote Pacific Island; tomorrow it may be all of downtown Miami and much of the Eastern Seaboard of the US.

The little white shack at the water’s edge in Lower Manhattan is unobtrusive — so much so that the tourists strolling the promenade at Battery Park the other day did not give it a second glance.

Up close, though, the roof of the shed behind a Coast Guard building bristled with antennas and other gear. Though not much bigger than a closet, this facility is helping scientists confront one of the great environmental mysteries of the age.

The equipment inside is linked to probes in the water that keep track of the ebb and flow of the tides in New York Harbor, its readings beamed up to a satellite every six minutes.

While the gear today is of the latest type, some kind of tide gauge has been operating at the Battery since the 1850s, by a government office originally founded by Thomas Jefferson. That long data record has become invaluable to scientists grappling with this question: How much has the ocean already risen, and how much more will it go up?

Scientists have spent decades examining all the factors that can influence the rise of the seas, and their research is finally leading to answers. And the more the scientists learn, the more they perceive an enormous risk for the United States.

Much of the population and economy of the country is concentrated on the East Coast., which the accumulating scientific evidence suggests will be a global hot spot for a rising sea level over the coming century.

The detective work has required scientists to grapple with the influence of ancient ice sheets, the meaning of islands that are sinking in Chesapeake Bay, and even the effect of a giant meteor that slammed into the earth.

The work starts with the tides. Because of their importance to navigation, they have been measured for the better part of two centuries. While the record is not perfect, scientists say it leaves no doubt that the world’s oceans are rising. The best calculation suggests that from 1880 to 2009, the global average sea level rose a little over eight inches.

That may not sound like much, but scientists say even the smallest increase causes the seawater to eat away more aggressively at the shoreline in calm weather, and leads to higher tidal surges during storms. The sea-level rise of decades past thus explains why coastal towns nearly everywhere are having to spend billions of dollars fighting erosion.

The evidence suggests that the sea-level rise has probably accelerated, to about a foot a century, and scientists think it will accelerate still more with the continued emission of large amounts of greenhouse gases into the air. The gases heat the planet and cause land ice to melt into the sea.

The official stance of the world’s climate scientists is that the global sea level could rise as much as three feet by the end of this century, if emissions continue at a rapid pace. But some scientific evidence supports even higher numbers, five feet and beyond in the worst case.

Scientists say the East Coast will be hit harder for many reasons, but among the most important is that even as the seawater rises, the land in this part of the world is sinking. And that goes back to the last ice age, which peaked some 20,000 years ago.

As a massive ice sheet, more than a mile thick, grew over what are now Canada and the northern reaches of the United States, the weight of it depressed the crust of the earth. Areas away from the ice sheet bulged upward in response, as though somebody had stepped on one edge of a balloon, causing the other side to pop up. Now that the ice sheet has melted, the ground that was directly beneath it is rising, and the peripheral bulge is falling.

Some degree of sinking is going on all the way from southern Maine to northern Florida, and it manifests itself as an apparent rising of the sea.

The sinking is fastest in the Chesapeake Bay region. Whole island communities that contained hundreds of residents in the 19th century have already disappeared. Holland Island, where the population peaked at nearly 400 people around 1910, had stores, a school, a baseball team and scores of homes. But as the water rose and the island eroded, the community had to be abandoned.

Eventually just a single, sturdy Victorian house, built in 1888, stood on a remaining spit of land, seeming at high tide to rise from the waters of the bay itself. A few years ago, a Washington Post reporter, David A. Fahrenthold, chronicled its collapse.

Aside from this general sinking of land up and down the East Coast, some places sit on soft sediments that tend to compress over time, so the localized land subsidence can be even worse than the regional trend. Much of the New Jersey coast is like that. The sea-level record from the Battery has been particularly valuable in sorting out this factor, because the tide gauge there is attached to bedrock and the record is thus immune to sediment compression.

Image: The last house on Holland Island in Chesapeake Bay, which once had a population of almost 400, finally toppled in October 2010. Courtesy of Astrid Riecken for The Washington Post.