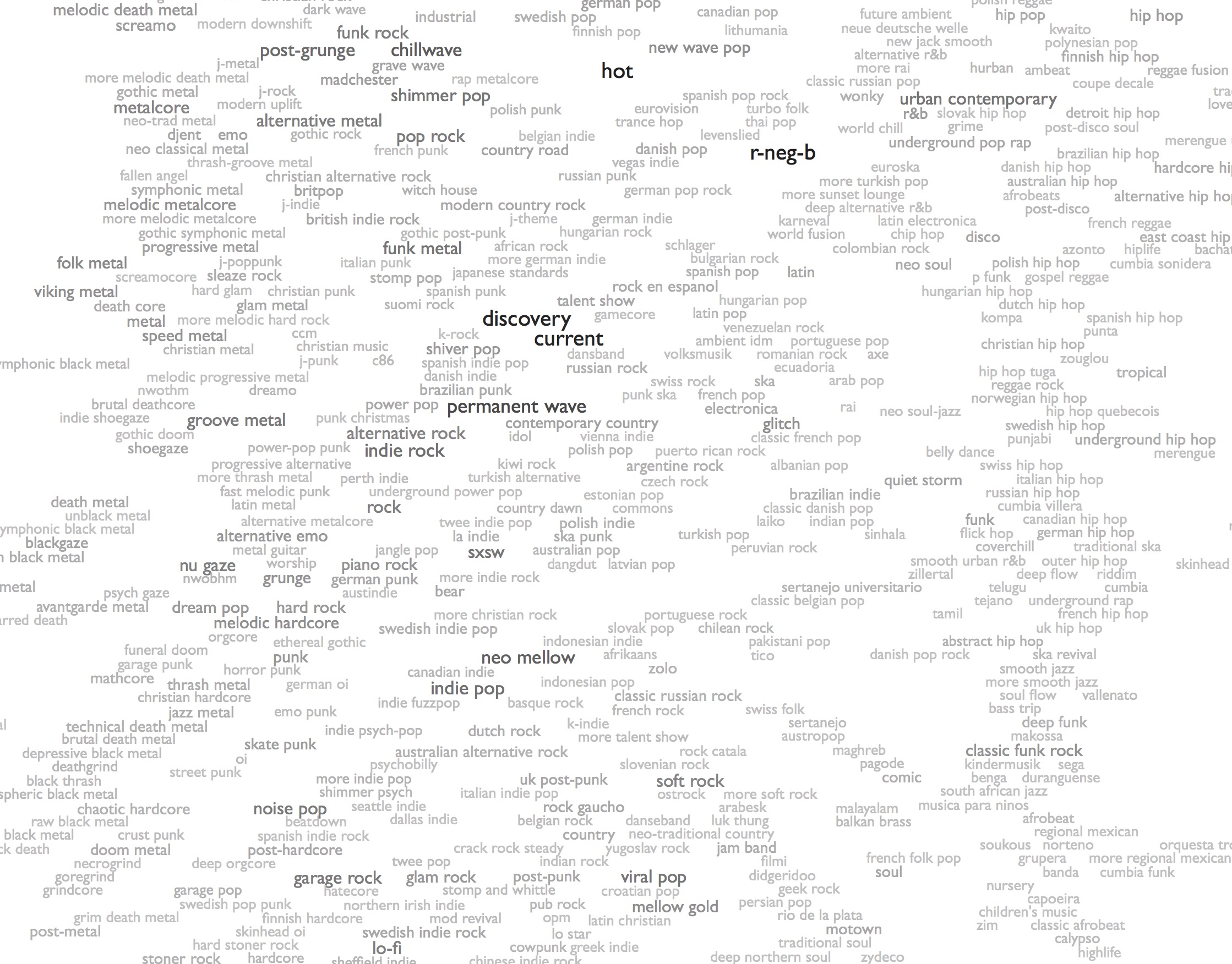 If you decide to do only one thing today, do this: visit everynoise, discover new music and have some expansive auditory fun.

Every Noise At Once is the brainchild of Glenn McDonald, a self-described data alchemist. He has sampled and categorized popular music into an astounding 1,264 genres — at current estimates.

You’re probably familiar with glam rock, emo punk, motown, ambient, garage, house, dub step, rap, metal and so on. But are you up on: neo-synthpop, fallen angel, deep orgcore, neurostep, death metal, skweee and cow punk? Well, here’s your chance to find out and expand your senses and your mind.

Music used to be easy. Some people liked rock. Some people liked pop. Some people liked jazz, blues or classical. And, basically, that was sort of it. However, musicians are a restless bunch and you can only play Smoke on the Water, Always Crashing in the Same Car or Roast Fish and Cornbread so many times before someone is bound to say: “Hang on a minute, what would happen if we played them all at the same time?” And so it is that new genres are born. Now imagine that happening for at least half a century or so – all over the world – and you reach a point at which, according to the engineer and “data alchemist” Glenn McDonald, there are now 1,264 genres of popular music; all you need to do is go directly to his startlingly cleverEveryNoise.com website and look – well, listen – for yourself.

Every Noise at Once is an ongoing attempt to build an algorithmically generated map of the entire musical genre-space, based on data tracked and analysed by Spotify’s music-intelligence division, The Echo Nest. It is also – in truth – one of the greatest time-eating devices ever created. You thought you had some kind of idea of just how much music is out there? You don’t. I don’t. But McDonald does. So he’s covered those genres – such as death metal, techno or hip-hop, which you’ll have heard of. Others, such as electro trash, indietronica or hard glam you may only have the most passing acquaintance with. Then, rather wonderfully, there are the outliers, those genres that you almost certainly didn’t even know existed – much less ever explored – suomi rock, shimmer psych,fourth world – right there at your fingertips any time you please. But the question is: what lives even further out than the outliers? How odd can it all get? Well, here are 10 genres (we could have nominated about 50) that even mouth-breathing indie record-shop blowhards (full disclosure: I used to be a mouth-breathing indie-record shop blowhard) would be hardpressed to help you find …

Read the entire story and sample some bands here.