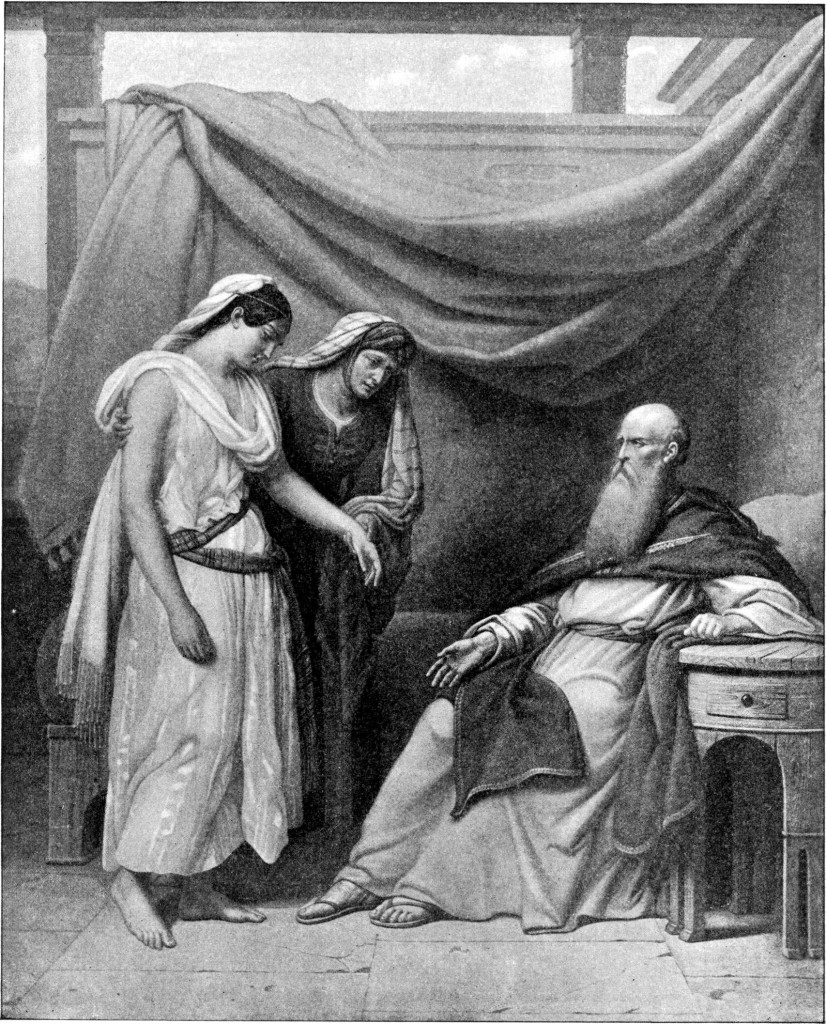 I’ve been following the recent story of a country clerk in Kentucky who is refusing to grant marriage licenses to same-sex couples. The clerk cites her profound Christian beliefs for contravening the new law of the land. I’m reminded that most people who ardently follow a faith, as proscribed by the literal word from a God, tend to interpret, cherry-pick and obey what they wish. And, those same individuals will fervently ignore many less palatable demands from their God. So, let’s review a few biblical pronouncements, lest we forget what all believers in the Christian bible should be doing.

Social conservatives who object to marriage licenses for gay couples claim to defend “Christian marriage,” meaning one man paired with one woman for life, which they say is prescribed by God in the Bible.

But in fact, Bible writers give the divine thumbs-up to many kinds of sexual union or marriage. They also use several literary devices to signal God’s approval for one or another sexual liaison: The law or a prophet might prescribe it, Jesus might endorse it, or God might reward it with the greatest of all blessings: boy babies who go on to become powerful men.

While the approved list does include one man coupled with one woman, the Bible explicitly endorses polygamy and sexual slavery, providing detailed regulations for each; and at times it also rewards rape and incest.

Polygamy. Polygamy is the norm in the Old Testament and accepted without reproof by Jesus (Matthew 22:23-32). Biblicalpolygamy.com contains pages dedicated to 40 biblical figures, each of whom had multiple wives.

Sex slaves. The Bible provides instructions on how to acquire several types of sex slaves. For example, if a man buys a Hebrew girl and “she please not her master” he can’t sell her to a foreigner; and he must allow her to go free if he doesn’t provide for her (Exodus 21:8).

War booty. Virgin females are counted, literally, among the booty of war. In the book of Numbers (31:18) God’s servant commands the Israelites to kill all of the used Midianite women along with all boy children, but to keep the virgin girls for themselves. The Law of Moses spells out a ritual to purify a captive virgin before sex. (Deuteronomy 21:10-14).

Incest. Incest is mostly forbidden in the Bible, but God makes exceptions. Abraham and Sarah, much favoured by God, are said to be half-siblings. Lot’s daughters get him drunk and mount him, and God rewards them with male babies who become patriarchs of great nations (Genesis 19).

Brother’s widow. If a brother dies with no children, it becomes a man’s duty to impregnate the brother’s widow. Onan is struck dead by God because he prefers to spill his seed on the ground rather than providing offspring for his brother (Genesis 38:8-10). A New Testament story (Matthew 22:24-28) shows that the tradition has survived.

Wife’s handmaid. After seven childless decades, Abraham’s frustrated wife Sarah says, “Go, sleep with my slave; perhaps I can build a family through her.”  Her slave, Hagar, becomes pregnant. Two generations later, the sister-wives of Jacob repeatedly send their slaves to him, each trying to produce more sons than the other (Genesis 30:1-22).

We are constantly reminded on the immense struggle that is humanity’s progress. Often it seems like one step forward and several back. Cultural relativism and hypocrisy continue to run rampant in a world that celebrates selfies and serfdom.

Oh, and in case you haven’t heard: the rulers of Saudi Arabia are feminists. But then again, so too are the white males who control most of the power, wealth, media and political machinery in the West.

Christine Lagarde, the first woman to head the IMF, has paid tribute to the late King Abdullah of Saudi Arabia. He was a strong advocate of women, she said. This is almost certainly not what she thinks. She even hedged her remarks about with qualifiers like “discreet” and “appropriate”. There are constraints of diplomacy and obligations of leadership and navigating between them can be fraught. But this time there was only one thing to say. Abdullah led a country that abuses women’s rights, and indeed all human rights, in a way that places it beyond normal diplomacy.

The constraints and restrictions on Saudi women are too notorious and too numerous to itemise. Right now, two women are in prison for the offence of trying to drive over the border in to Saudi Arabia. It is not just the ban on driving. There is also the ban on going out alone, the ban on voting, the death penalty for adultery, and the total obliteration of public personality – almost of a sense of existence – by the obligatory veil. And there are the terrible punishments meted out to those who infringe these rules that are not written down but “interpreted” – Islam mediated through the conventions of a deeply conservative people.

Lagarde is right. King Abdullah did introduce reforms. Women can now work almost anywhere they want, although their husband brother or father will have to drive them there (and the children to school). They can now not just study law but practise as lawyers. There are women on the Sharia council and it was through their efforts that domestic violence has been criminalised. But enforcement is in the hands of courts that do not necessarily recognise the change. These look like reforms with all the substance of a Potemkin village, a flimsy structure to impress foreign opinion.

Pressure for change is driven by women themselves, exploiting social media by actions that range from the small, brave actions of defiance – posting images of women at the wheel (ovaries, despite men’s fears, apparently undamaged) – to the large-scale subversive gesture such as the YouTube TV programmes reported by the Economist.

But the point about the Lagarde remarks is that there are signs the Saudi authorities really can be sensitive to the rare criticism that comes from western governments, and the western media. Such protests may yet spare blogger Raif Badawi from further punishment for alleged blasphemy. Today’s lashing has been delayed for the third successive week .The Saudi authorities, like any despotic regime, are trying to appease their critics and contain the pressure for change that social media generates by conceding inch by inch so that, like the slow downhill creep of a glacier, the religious authorities and mainstream social opinion don’t notice it is happening.

But beyond Saudi’s borders, it is surely the duty of everyone who really does believe in equality and human rights to shout and finger point and criticise at every opportunity. Failing to do so is what makes Christine Lagarde’s remarks a betrayal of the women who literally risk everything to try to bring about change in the oppressive patriarchy in which they live. They are typical of the desire not to offend the world’s biggest oil producer and the west’s key Middle Eastern ally, a self-censorship that allows the Saudis to claim they respect human rights while breaching every known norm of behaviour.