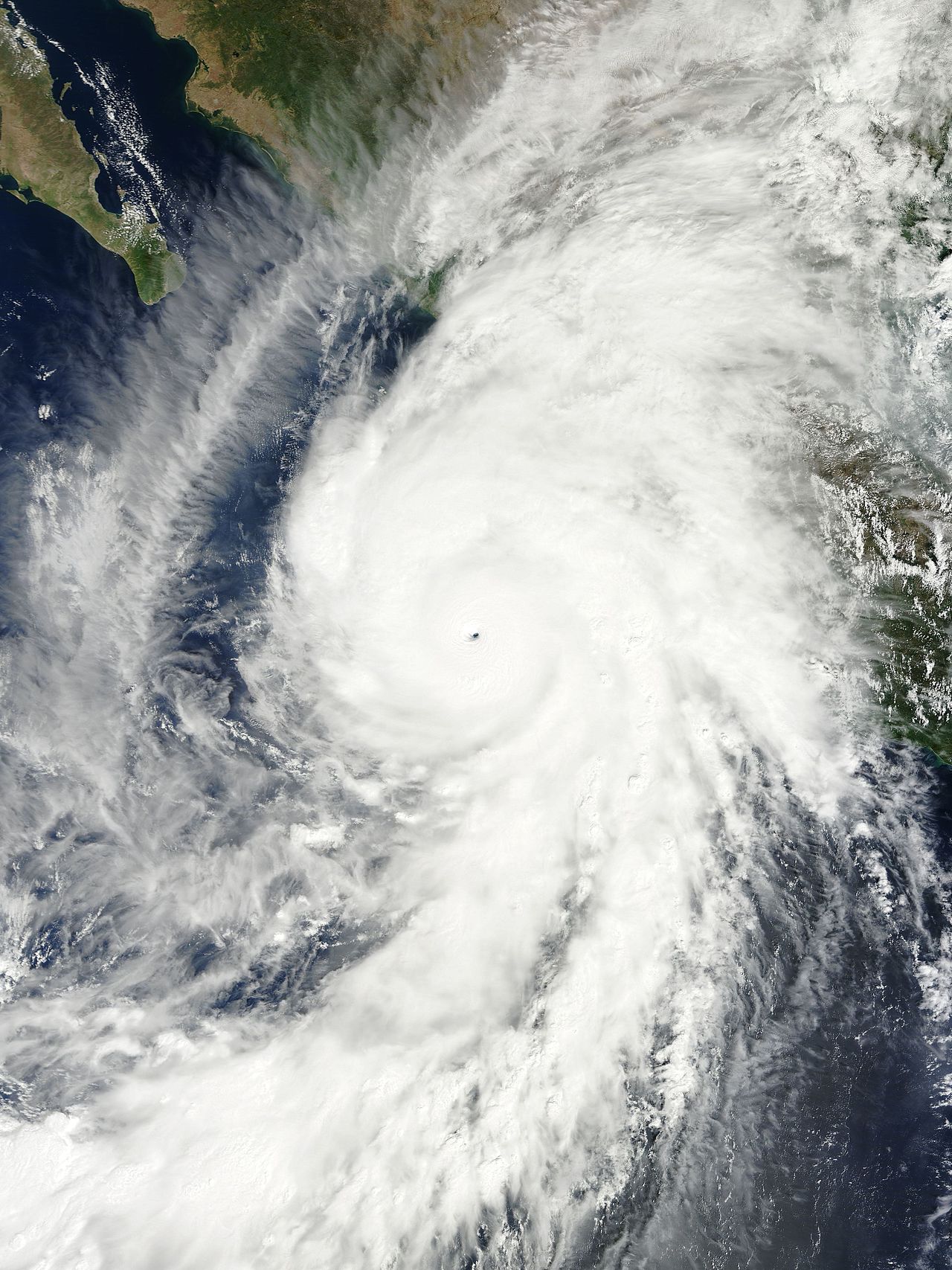 Amateur meteorologist that I am I wonder when my professional colleagues will extend the Saffir–Simpson hurricane wind scale (SSHWS). Currently the scale classifies hurricanes — western hemisphere tropical cyclones — on a scale of 1 to 5. Category 1 hurricanes encompass winds between 74-95 miles per hour; category 5 storms gyrate in excess of 157 miles per hour. As our global climate becomes increasingly warmer — which it is — our weather is becoming increasingly more volatile and extreme — longer hotter droughts, greater torrential rainfall, higher floods.

Category 5 will soon need to be supplemented. After all, the recent storm to hit the Pacific coast of Mexico — hurricane Patricia — reached sustained winds of 201 miles per hour; Typhoon Haiyan had a top wind spend of only 195 mph when it slammed the Phillippines in 2013 killing over 7,000 residents.

Hurricane Patricia was a surprise. The eastern Pacific hurricane strengthened explosively before hitting the coast of Mexico, far exceeding projections of scientists who study such storms.

And while the storm’s strength dissipated quickly when it struck land, a question remained. What made it such a monster?

Explanations were all over the map, with theories that included climate change (or not), and El Niño.

But the answer is more complicated. The interplay of all the different kinds of warming going on in the Pacific at the moment can be difficult to sort out and, as with the recent hurricane, attributing a weather event to a single cause is unrealistic.

Gabriel Vecchi, head of the climate variations and predictability group at the geophysical fluid dynamics laboratory of the National Oceanic and Atmospheric Administration in Princeton, N.J., likened the challenge to the board game Clue.

“There’s all these suspects, and we have them all in the room right now,” he said. “The key is to go and systematically figure out who was where and when, so we can exclude people or phenomena.” Extending the metaphor, he noted that criminal suspects could work together as accomplices, and there could be a character not yet known. And, as in all mysteries, “You can have a twist ending.”

At the moment, the world’s largest ocean is a troublesome place, creating storms and causing problems for people and marine life across the Pacific Rim and beyond. A partial list includes the strong El Niño system that has formed along the Equator, and another unusually persistent zone of warm water that has been sitting off the North American coast, wryly called “the Blob.”

And a longer-term cycle of heating and cooling known as the Pacific Decadal Oscillation may be switching from a cooling phase to a warming phase. On top of all that is the grinding progress of climate change, caused by accumulation of greenhouse gases generated by human activity.

Each of these phenomena operates on a different time scale, but for now they appear to be synchronized, a little like the way the second hand, minute hand and hour hand line up at the stroke of midnight. And the collective effects could be very powerful. 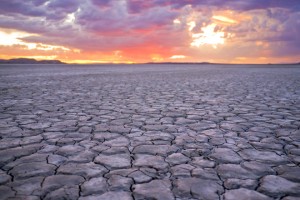 Call it what you may, but regardless of labels most climate scientists agree that our future weather systems are much more likely to be more extreme: more prolonged and more violent.

If there was one overarching point that the fifth Intergovernmental Panel on Climate Change report took pains to stress, it was that the degree of change in the global climate system since the mid-1950s is unusual in scope. Depending on what exactly you measure, the planet hasn’t seen conditions like these for decades to millennia. But that conclusion leaves us with a question: when exactly can we expect the climate to look radically new, with features that have no historical precedent?

The answer, according to a modeling study published in this week’s issue of Nature, is “very soon”—as soon as 2047 under a “business-as-usual” emission scenario and only 22 years later under a reduced emissions scenario. Tropical countries will likely be the first to enter this new age of climatic erraticness and could experience extreme temperatures monthly after 2050. This, the authors argue, underscores the need for robust efforts targeted not only at protecting those vulnerable countries but also the rich biodiversity that they harbor.

Developing an index, one model at a time

Before attempting to peer into the future, the authors, led by the University of Hawaii’s Camilo Mora, first had to ensure that they could accurately replicate the recent past. To do so, they pooled together the predictive capabilities of 39 different models, using near-surface air temperature as their indicator of choice.

For each model, they established the bounds of natural climate variability as the minimum and maximum values attained between 1860 and 2005. Simultaneously crunching the outputs from all of these models proved to be the right decision, as Mora and his colleagues consistently found that a multi-model average best fit the real data.

Next, they turned to two widely used emission scenarios, or Representative Concentration Pathways (RCP) as they’re known in modeling vernacular, to predict the arrival of different climates over a period extending from 2006 to 2100. The first scenario, RCP45, assumes a concerted mitigation initiative and anticipates CO2 concentrations of up to 538 ppm by 2100 (up from the current 393 ppm). The second, RCP85, is the trusty “business-as-usual” scenario that anticipates concentrations of up to 936 ppm by the same year.

While testing the sensitivity of their index, Mora and his colleagues concluded that the length of the reference period—the number of years between 1860 and 2005 used as a basis for establishing the limits of historical climate variability—had no effect on the ultimate outcome. A longer period would include more instances of temperature extremes, both low and high, so you would expect that it would yield a broader range of limits. That would mean that any projections of extreme future events might not seem so extreme by comparison.

In practice, it didn’t matter whether the authors used 20 years or 140 years as the length of their reference period. What did matter, they found, was the number of consecutive years where the climate was out of historical bounds. This makes intuitive sense: if you consider fewer consecutive years, the departure from “normal” will come sooner.

Rather than pick one arbitrary number of consecutive years versus another, the authors simply used all of the possible values from each of the 39 models. That accounts for the relatively large standard deviations in the estimated starting dates of exceptional climates—18 years for the RCP45 scenario and 14 years for the RCP85 scenario. That means that the first clear climate shift could occur as early as 2033 or as late as 2087.

Though temperature served as the main proxy for climate in their study, the authors also analyzed four other variables for the atmosphere and two for the ocean. These included evaporation, transpiration, sensible heat flux (the conductive transfer of heat from the planet’s surface to the atmosphere) and precipitation, as well as sea surface temperature and surface pH in the ocean.

Replacing temperature with, or considering it alongside, any of the other four variables for atmosphere did not change the timing of climate departures. This is because temperature is the most sensitive variable and therefore also the earliest to exceed the normal bounds of historical variability.

Seawater pH has an extremely narrow range of historical variability, and it moved out of this range 5 years ago, which caused the year of the climate departure to jump forward several decades. This may be an extreme case, but it serves as a stark reminder that the ocean is already on the edge of uncharted territory.

WHO is happier about life — liberals or conservatives? The answer might seem straightforward. After all, there is an entire academic literature in the social sciences dedicated to showing conservatives as naturally authoritarian, dogmatic, intolerant of ambiguity, fearful of threat and loss, low in self-esteem and uncomfortable with complex modes of thinking. And it was the candidate Barack Obama in 2008 who infamously labeled blue-collar voters “bitter,” as they “cling to guns or religion.” Obviously, liberals must be happier, right?

Wrong. Scholars on both the left and right have studied this question extensively, and have reached a consensus that it is conservatives who possess the happiness edge. Many data sets show this. For example, the Pew Research Center in 2006 reported that conservative Republicans were 68 percent more likely than liberal Democrats to say they were “very happy” about their lives. This pattern has persisted for decades. The question isn’t whether this is true, but why.

Many conservatives favor an explanation focusing on lifestyle differences, such as marriage and faith. They note that most conservatives are married; most liberals are not. (The percentages are 53 percent to 33 percent, according to my calculations using data from the 2004 General Social Survey, and almost none of the gap is due to the fact that liberals tend to be younger than conservatives.) Marriage and happiness go together. If two people are demographically the same but one is married and the other is not, the married person will be 18 percentage points more likely to say he or she is very happy than the unmarried person.

An explanation for the happiness gap more congenial to liberals is that conservatives are simply inattentive to the misery of others. If they recognized the injustice in the world, they wouldn’t be so cheerful. In the words of Jaime Napier and John Jost, New York University psychologists, in the journal Psychological Science, “Liberals may be less happy than conservatives because they are less ideologically prepared to rationalize (or explain away) the degree of inequality in society.” The academic parlance for this is “system justification.”

The data show that conservatives do indeed see the free enterprise system in a sunnier light than liberals do, believing in each American’s ability to get ahead on the basis of achievement. Liberals are more likely to see people as victims of circumstance and oppression, and doubt whether individuals can climb without governmental help. My own analysis using 2005 survey data from Syracuse University shows that about 90 percent of conservatives agree that “While people may begin with different opportunities, hard work and perseverance can usually overcome those disadvantages.” Liberals — even upper-income liberals — are a third less likely to say this.

So conservatives are ignorant, and ignorance is bliss, right? Not so fast, according to a study from the University of Florida psychologists Barry Schlenker and John Chambers and the University of Toronto psychologist Bonnie Le in the Journal of Research in Personality. These scholars note that liberals define fairness and an improved society in terms of greater economic equality. Liberals then condemn the happiness of conservatives, because conservatives are relatively untroubled by a problem that, it turns out, their political counterparts defined.

There is one other noteworthy political happiness gap that has gotten less scholarly attention than conservatives versus liberals: moderates versus extremists.

Political moderates must be happier than extremists, it always seemed to me. After all, extremists actually advertise their misery with strident bumper stickers that say things like, “If you’re not outraged, you’re not paying attention!”

But it turns out that’s wrong. People at the extremes are happier than political moderates. Correcting for income, education, age, race, family situation and religion, the happiest Americans are those who say they are either “extremely conservative” (48 percent very happy) or “extremely liberal” (35 percent). Everyone else is less happy, with the nadir at dead-center “moderate” (26 percent).

What explains this odd pattern? One possibility is that extremists have the whole world figured out, and sorted into good guys and bad guys. They have the security of knowing what’s wrong, and whom to fight. They are the happy warriors.

Whatever the explanation, the implications are striking. The Occupy Wall Street protesters may have looked like a miserable mess. In truth, they were probably happier than the moderates making fun of them from the offices above. And none, it seems, are happier than the Tea Partiers, many of whom cling to guns and faith with great tenacity. Which some moderately liberal readers of this newspaper might find quite depressing.