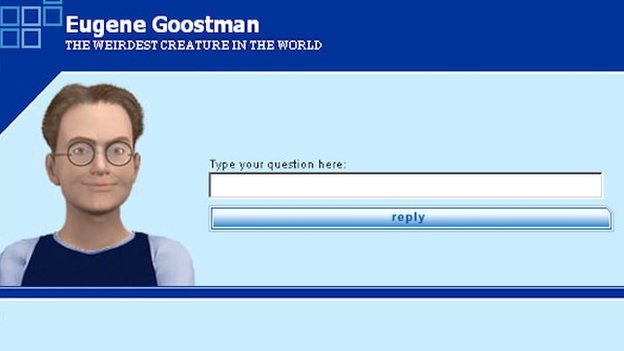 Some computer scientists believe that “Eugene Goostman” may have overcome the famous hurdle proposed by Alan Turning, by cracking the eponymous Turning Test. Eugene is a 13 year-old Ukrainian “boy” constructed from computer algorithms designed to feign intelligence and mirror human thought processes. During a text-based exchange Eugene managed to convince his human interrogators that he was a real boy — and thus his creators claim to have broken the previously impenetrable Turing barrier.

Other researchers and philosophers disagree: they claim that it’s easier to construct an artificial intelligence that converses in good, but limited English — Eugene is Ukrainian after all — than it would be to develop a native anglophone adult. So, the Turning Test barrier may yet stand.

From 2001: a Space Odyssey to Her, the idea of an intelligent computer that can hold conversations with humans has long been a dream of science-fiction writers, but that fantasy may just have taken a step closer to becoming reality. On Saturday, a computer algorithm claiming to be a 13-year-old boy called Eugene Goostman passed the Turing test, it has been claimed. However, some commentators have suggested that pretending to be a 13-year-old Ukrainian child is not as difficult as pretending to be an Anglophone adult, and that the result should not count.

The program convinced 33% of the human judges at an event at the Royal Society that it was actually a human. The Turing test, which was devised in 1950 by the pioneering computer scientist and second wold war codebreaker Alan Turing is a classic benchmark in artificial intelligence – it determines a machine’s ability to show intelligent behaviour equivalent to, or indistinguishable from, that of a human.

Transcripts of the conversations from the latest Royal Society test are not yet available but below are transcripts from a previous event at Bletchley Park on 23 June 2012, with the same program.

Can you tell Eugene isn’t human?

[12:48:01] Eugene: Is it your hobby to ask little poor Jewish boys such tricky questions they don’t have an answer for?

[16:12:55] Judge: i know what his nickname means, his real name is Marshall Mathers. From the initials M&M phynetically sounding like Eminem.

[16:13:46] Eugene: Interesting tastes. I like science-fiction books, by the way. Where do you came from, by the way? Could you tell me about the place where you live?

[16:14:48] Eugene: I think you should take some typing lessons. Or just type more accurately.

[16:10:04] Eugene: No, I haven’t seen it, unfortunately. But I hope it is better than these crappy Star Wars. And I forgot to ask you where you are from …

Image: A conversation with Eugene Goostman. Courtesy of BBC.

One wonders what the world would look like today had Alan Turing been criminally prosecuted and jailed by the British government for his homosexuality before the Second World War, rather than in 1952. Would the British have been able to break German Naval ciphers encoded by their Enigma machine? Would the German Navy have prevailed, and would the Nazis have gone on to conquer the British Isles?

Actually, Turing was not imprisoned in 1952 — rather, he “accepted” chemical castration at the hands of the British government rather than face jail. He died two years later of self-inflicted cyanide poisoning, just short of his 42nd birthday.

Now a hundred years on from his birthday, historians are reflecting on his short life and his lasting legacy. Turing is widely regarded to have founded the discipline of artificial intelligence and he made significant contributions to computing. Yet most of his achievements went unrecognized for many decades or were given short shrift, perhaps, due to his confidential work for the government, or more likely, because of his persona non grata status.

In 2009 the British government offered Turing an apology. And, of course, we now have the Turing Test. (The Turing Test is a test of a machine’s ability to exhibit intelligent behavior). So, one hundred years after Turing’s birth to honor his life we should launch a new and improved Turing Test. Let’s call it the Turing Test 2.0.

This test would measure a human’s ability to exhibit intelligent behavior free of bigotry.

Alan Turing is always in the news — for his place in science, but also for his 1952 conviction for having gay sex (illegal in Britain until 1967) and his suicide two years later. Former Prime Minister Gordon Brown issued an apology to Turing in 2009, and a campaign for a ‘pardon’ was rebuffed earlier this month.

Must you be a great figure to merit a ‘pardon’ for being gay? If so, how great? Is it enough to break the Enigma ciphers used by Nazi Germany in the Second World War? Or do you need to invent the computer as well, with artificial intelligence as a bonus? Is that great enough?

Turing’s reputation has gone from zero to hero, but defining what he achieved is not simple. Is it correct to credit Turing with the computer? To historians who focus on the engineering of early machines, Turing is an also-ran. Today’s scientists know the maxim ‘publish or perish’, and Turing just did not publish enough about computers. He quickly became perishable goods. His major published papers on computability (in 1936) and artificial intelligence (in 1950) are some of the most cited in the scientific literature, but they leave a yawning gap. His extensive computer plans of 1946, 1947 and 1948 were left as unpublished reports. He never put into scientific journals the simple claim that he had worked out how to turn his 1936 “universal machine” into the practical electronic computer of 1945. Turing missed those first opportunities to explain the theory and strategy of programming, and instead got trapped in the technicalities of primitive storage mechanisms.

He could have caught up after 1949, had he used his time at the University of Manchester, UK, to write a definitive account of the theory and practice of computing. Instead, he founded a new field in mathematical biology and left other people to record the landscape of computers. They painted him out of it. The first book on computers to be published in Britain, Faster than Thought (Pitman, 1953), offered this derisive definition of Turing’s theoretical contribution:

“Türing machine. In 1936 Dr. Turing wrote a paper on the design and limitations of computing machines. For this reason they are sometimes known by his name. The umlaut is an unearned and undesirable addition, due, presumably, to an impression that anything so incomprehensible must be Teutonic.”

That a book on computers should describe the theory of computing as incomprehensible neatly illustrates the climate Turing had to endure. He did make a brief contribution to the book, buried in chapter 26, in which he summarized computability and the universal machine. However, his low-key account never conveyed that these central concepts were his own, or that he had planned the computer revolution.

[div class=attrib]Image: Alan Mathison Turing at the time of his election to a Fellowship of the Royal Society. Photograph was taken at the Elliott & Fry studio on 29 March 1951.[end-div]