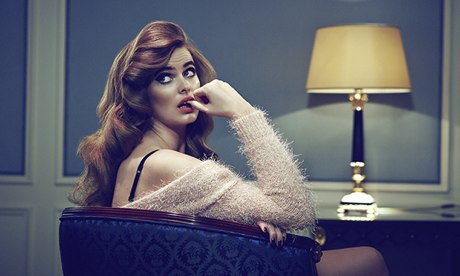 The gap in question is not the infamous gap between subway platform and train, but the so-called “thigh gap”. Courtesy of the twittersphere, internet trolls and the substance-lacking 24hr news media, the thigh gap has now become the hot topic du jour.

One wonders when the conversation will move to a more significant gap — the void between the ears of a significant number of image-obsessed humans.

She may have modelled for Ralph Lauren and appeared on the cover of Vogue Italia, but when a photo of Robyn Lawley wearing a corset appeared on Facebook the responses were far from complimentary. “Pig”, “hefty” and “too fat” were some of the ways in which commenters described the 24-year-old. Her crime? Her thighs were touching. Lawley had failed to achieve a “thigh gap”.

The model, who has her own swimwear line and has won numerous awards for her work, responded vehemently below the line: “You sit behind a computer screen objectifying my body, judging it and insulting it, without even knowing it.”

She also went on to pen a thoughtful rallying cry for the Daily Beast last week against those who attacked her, saying their words were “just another tool of manipulation that other people are trying to use to keep me from loving my body”.

The response to her article was electric and Lawley was invited to speak about thigh-gap prejudice on America’s NBC Today. In a careful and downbeat tone, she explained: “It’s basically when your upper middle thighs do not touch when you’re standing with your legs together.”

The Urban Dictionary website describes it in no uncertain terms as “the gap between a woman’s thighs directly below the vagina, often diamond shaped when the thighs are together.”

The thigh gap is not a new concept to Lawley, who at 6ft 2in and 12 stone is classified as a “plus-size” model, and who remembers learning about it aged 12. But the growth of Instagram and other social media has allowed the concept of a thigh gap to enter the public consciousness and become an alarming, and exasperating, new trend among girls and women.

A typical example is a Twitter account devoted solely to Cara Delevingne’s thigh gap, which the model initially described as “pretty funny” but also “quite crazy”.

Selfies commonly show one part of a person’s anatomy, a way of compartmentalising body sections to show them in the best light, and the thigh gap is particularly popular. What was once a standard barometer of thinness among models is now apparently sought after by a wider public.

The thigh gap has its own hashtag on Twitter, under which users post pictures of non-touching thighs for inspiration, and numerous dedicated blogs. The images posted mirror the ubiquitous images of young, slim models and pop stars in shorts, often at festivals such as Glastonbury or Coachella, that have flooded the mainstream media in recent years, bringing with them the idea that skinniness, glamour and fun are intertwined.

There is even a “how to” page on the internet, although worshippers of thin may be disappointed to find that the first step is to “understand that a thigh gap is not physically possible for most people”.

Naomi Shimada began modelling at 13, but had to quit the industry when her weight changed. “I was what they call a straight-size model – a size 6 – when I started, which is normal for a very young girl.

“But as I got older my body didn’t stay like that, because, guess what, that doesn’t happen to people! So I took a break and went back in as a size 14 and now work as a plus-size model.”

Shimada is unequivocal about where the obsession with the thigh gap comes from. “It’s not a new trend: it’s been around for years. It comes partly from a fashion industry that won’t acknowledge that there are different ways a woman should look, and it comes from the pro-anorexic community. It’s a path to an eating disorder.”

Caryn Franklin, the former Clothes Show presenter who co-founded the diversity campaign All Walks Beyond the Catwalk, is quite appalled. “We now have a culture that convinces women to see themselves as an exterior only, and evaluating and measuring the component parts of their bodies is one of the symptoms.

“Young women do not have enough female role models showing them action or intellect. In their place are scantily clad celebrities. Sadly, young women are wrongly looking to fashion for some kind of guidance on what it is to be female.”

Franklin, who was fashion editor of style magazine i-D in the 1980s, says it hasn’t always been this way: “I had spent my teen years listening to Germaine Greer and Susie Orbach talking about female intellect.

“When I came out of college I knew I had a contribution to make that wasn’t based on my appearance. I then landed in a fashion culture that was busy celebrating diversity. There was no media saying ‘get the look’ and pointing to celebrities as style leaders because there wasn’t a homogenised fashion look, and there weren’t digital platforms that meant that I was exposed to more images of unachievable beauty.”

Asked whether the fixation on skinny thighs is a way of forcing women’s bodies to look pre-pubescent, Franklin says: “This culture has encouraged women to infantilise themselves. When you are so fixated on approval for what you look like, you are a little girl: you haven’t grown up.”

For many, the emergence of the thigh gap trend is baffling.

“About four hours ago, as far as I was concerned a ‘thigh gap’ was something anyone could have if they stood up and placed their feet wider than hip distance apart,” wrote Vice journalist Bertie Brandes when she discovered the phenomenon.

“A thigh gap is actually the hollow cavity which appears between the tops of your legs when you stand with your feet together. It also means that your body is underweight.”

Other bloggers have responded with a sense of the absurd; feminist blog Smells Like Girl Riot recently posted a diagram of a skeleton to show why the ischium and the pubis cannot be altered through diet alone.

Shimada, now 26, is about to launch her own fanzine, A-Genda, which aims to use a diverse range of models to show young women “something healthy to aspire to”.

“When I was a really young model there were girls who used to talk about the pencil test, which is when you measure the depth of your waist against the length of a pencil, and back dimples, when the lack of fat would create concave areas of skin,” she says. “But I don’t even think this kind of thing is limited to the fashion industry any more. It’s all a big mess. But we all have to play a role in making it better.”

Franklin also wonders: “When did everyone become so narcissistic? What happened to intellect? My sense of myself was not informed by a very shallow patriarchal media that prioritised the objectification of women – it was informed by feminism.”

Lawley signed off her call to arms with a similar acknowledgement of the potential power of women’s bodies.

“I’ve been trying to do just the opposite: I want my thighs to be bigger and stronger. I want to run faster and swim longer. I suppose we all just want different things, but women have enough pressure as it is without the added burden of achieving a ‘thigh gap’.

“The last thing I would want for my future daughter would be to starve herself because she thought a ‘thigh gap’ was necessary to be deemed attractive.”