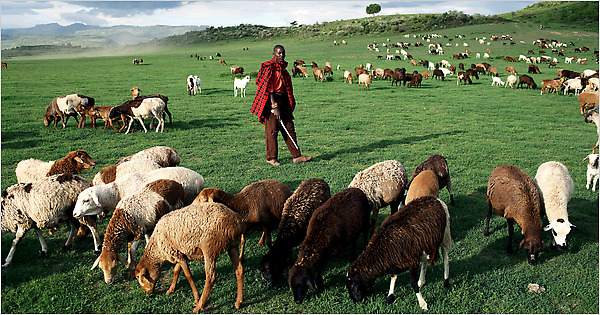 As with any other species, human populations are shaped by the usual forces of natural selection, like famine, disease or climate. A new force is now coming into focus. It is one with a surprising implication — that for the last 20,000 years or so, people have inadvertently been shaping their own evolution.

The force is human culture, broadly defined as any learned behavior, including technology. The evidence of its activity is the more surprising because culture has long seemed to play just the opposite role. Biologists have seen it as a shield that protects people from the full force of other selective pressures, since clothes and shelter dull the bite of cold and farming helps build surpluses to ride out famine.

Because of this buffering action, culture was thought to have blunted the rate of human evolution, or even brought it to a halt, in the distant past. Many biologists are now seeing the role of culture in a quite different light.

Although it does shield people from other forces, culture itself seems to be a powerful force of natural selection. People adapt genetically to sustained cultural changes, like new diets. And this interaction works more quickly than other selective forces, “leading some practitioners to argue that gene-culture co-evolution could be the dominant mode of human evolution,” Kevin N. Laland and colleagues wrote in the February issue of Nature Reviews Genetics. Dr. Laland is an evolutionary biologist at the University of St. Andrews in Scotland.

The idea that genes and culture co-evolve has been around for several decades but has started to win converts only recently. Two leading proponents, Robert Boyd of the University of California, Los Angeles, and Peter J. Richerson of the University of California, Davis, have argued for years that genes and culture were intertwined in shaping human evolution. “It wasn’t like we were despised, just kind of ignored,” Dr. Boyd said. But in the last few years, references by other scientists to their writings have “gone up hugely,” he said.

The best evidence available to Dr. Boyd and Dr. Richerson for culture being a selective force was the lactose tolerance found in many northern Europeans. Most people switch off the gene that digests the lactose in milk shortly after they are weaned, but in northern Europeans — the descendants of an ancient cattle-rearing culture that emerged in the region some 6,000 years ago — the gene is kept switched on in adulthood.

Lactose tolerance is now well recognized as a case in which a cultural practice — drinking raw milk — has caused an evolutionary change in the human genome. Presumably the extra nutrition was of such great advantage that adults able to digest milk left more surviving offspring, and the genetic change swept through the population.