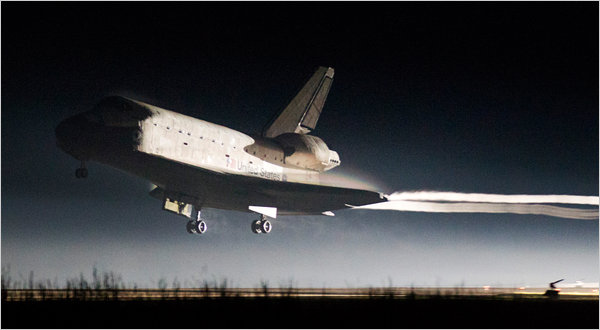 The last space shuttle flight rolled to a stop just before 6 a.m. on Thursday, closing an era of the nation’s space program.

“Mission complete, Houston,” said Capt. Christopher J. Ferguson of the Navy, commander of the shuttle Atlantis for the last flight. “After serving the world for over 30 years, the space shuttle has earned its place in history, and it’s come to a final stop.”

It was the 19th night landing at the Kennedy Space Center in Florida to end the 135th space shuttle mission. For Atlantis, the final tally of its 26-year career is 33 missions, accumulating just short of 126 million miles during 307 days in space, circumnavigating the Earth 4,848 times.

A permanent marker will be placed on the runway to indicate the final resting spot of the space shuttle program.

The last day in space went smoothly. Late on Wednesday night, the crew awoke to the Kate Smith version of “God Bless America.” With no weather or technical concerns, the crew closed the payload doors at 2:09 a.m. on Thursday.

At 4:13 a.m., Barry E. Wilmore, an astronaut at mission control in Houston, told the Atlantis crew, “Everything is looking fantastic, there you are go for the deorbit burn, and you can maneuver on time.”