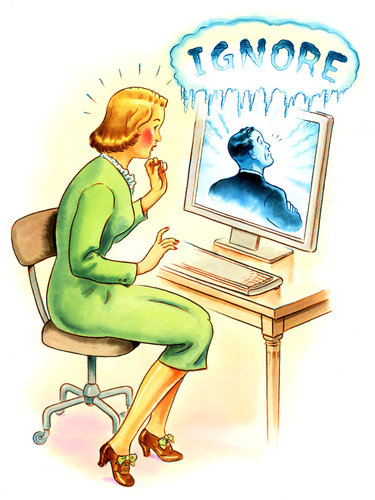 “WHEN people don’t answer my e-mails, I always think maybe something tragic happened,” said John Leguizamo, the writer and performer, whose first marriage ended when his wife asked him by e-mail for a divorce. “Like maybe they got hit by a meteorite.”

Betsy Rapoport, an editor and life coach, said: “I don’t believe I have ever received an answer from any e-mail I’ve ever sent my children, now 21 and 18. Unless you count ‘idk’ as a response.”

The British linguist David Crystal said that his wife recently got a reply to an e-mail she sent in 2006. “It was like getting a postcard from the Second World War,” he said.

The roaring silence. The pause that does not refresh. The world is full of examples of how the anonymity and remove of the Internet cause us to write and post things that we later regret. But what of the way that anonymity and remove sometimes leave us dangling like a cartoon character that has run off a cliff?

For every fiery screed or gushy, tear-streaked confession in the ethersphere, it seems there’s a big patch of grainy, unresolved black. Though it would comfort us to think that these long silences are the product of technical failure or mishap, the more likely culprits are lack of courtesy and passive aggression.

“The Internet is something very informal that happened to a society that was already very informal,” said P. M. Forni, an etiquette expert and the author of “Choosing Civility.” “We can get away with murder, so to speak. The endless amount of people we can contact means we are not as cautious or kind as we might be. Consciously or unconsciously we think of our interlocutors as disposable or replaceable.”

Judith Kallos, who runs a site on Internet etiquette called netmanners.com, said the No. 1 complaint is that “people feel they’re being ignored.”