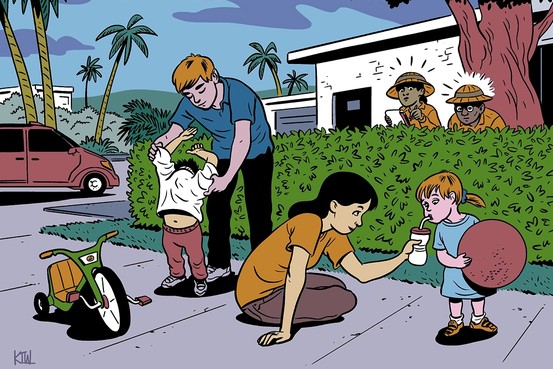 Why can’t our kids tie their own shoes?

Are we raising our children to be self-obsessed, attention-seeking, helpless and dependent groupthinkers? And, why may the phenomenon of “family time” in the U.S. be a key culprit?

These are some of the questions raised by anthropologist Elinor Ochs and her colleagues. Over the last decade they have studied family life across the globe, from the Amazon region, to Samoa, and middle-America.

Why do American children depend on their parents to do things for them that they are capable of doing for themselves? How do U.S. working parents’ views of “family time” affect their stress levels? These are just two of the questions that researchers at UCLA’s Center on Everyday Lives of Families, or CELF, are trying to answer in their work.

By studying families at home—or, as the scientists say, “in vivo”—rather than in a lab, they hope to better grasp how families with two working parents balance child care, household duties and career, and how this balance affects their health and well-being.

The center, which also includes sociologists, psychologists and archeologists, wants to understand “what the middle class thought, felt and what they did,” says Dr. Ochs. The researchers plan to publish two books this year on their work, and say they hope the findings may help families become closer and healthier.

Ten years ago, the UCLA team recorded video for a week of nearly every moment at home in the lives of 32 Southern California families. They have been picking apart the footage ever since, scrutinizing behavior, comments and even their refrigerators’s contents for clues.

The families, recruited primarily through ads, owned their own homes and had two or three children, at least one of whom was between 7 and 12 years old. About a third of the families had at least one nonwhite member, and two were headed by same-sex couples. Each family was filmed by two cameras and watched all day by at least three observers.

Among the findings: The families had very a child-centered focus, which may help explain the “dependency dilemma” seen among American middle-class families, says Dr. Ochs. Parents intend to develop their children’s independence, yet raise them to be relatively dependent, even when the kids have the skills to act on their own, she says.

In addition, these parents tended to have a very specific, idealized way of thinking about family time, says Tami Kremer-Sadlik, a former CELF research director who is now the director of programs for the division of social sciences at UCLA. These ideals appeared to generate guilt when work intruded on family life, and left parents feeling pressured to create perfect time together. The researchers noted that the presence of the observers may have altered some of the families’ behavior.

How kids develop moral responsibility is an area of focus for the researchers. Dr. Ochs, who began her career in far-off regions of the world studying the concept of “baby talk,” noticed that American children seemed relatively helpless compared with those in other cultures she and colleagues had observed.

In those cultures, young children were expected to contribute substantially to the community, says Dr. Ochs. Children in Samoa serve food to their elders, waiting patiently in front of them before they eat, as shown in one video snippet. Another video clip shows a girl around 5 years of age in Peru’s Amazon region climbing a tall tree to harvest papaya, and helping haul logs thicker than her leg to stoke a fire.

By contrast, the U.S. videos showed Los Angeles parents focusing more on the children, using simplified talk with them, doing most of the housework and intervening quickly when the kids had trouble completing a task.

In 22 of 30 families, children frequently ignored or resisted appeals to help, according to a study published in the journal Ethos in 2009. In the remaining eight families, the children weren’t asked to do much. In some cases, the children routinely asked the parents to do tasks, like getting them silverware. “How am I supposed to cut my food?” Dr. Ochs recalls one girl asking her parents.

Asking children to do a task led to much negotiation, and when parents asked, it sounded often like they were asking a favor, not making a demand, researchers said. Parents interviewed about their behavior said it was often too much trouble to ask.

For instance, one exchange caught on video shows an 8-year-old named Ben sprawled out on a couch near the front door, lifting his white, high-top sneaker to his father, the shoe laced. “Dad, untie my shoe,” he pleads. His father says Ben needs to say “please.”

“Please untie my shoe,” says the child in an identical tone as before. After his father hands the shoe back to him, Ben says, “Please put my shoe on and tie it,” and his father obliges.