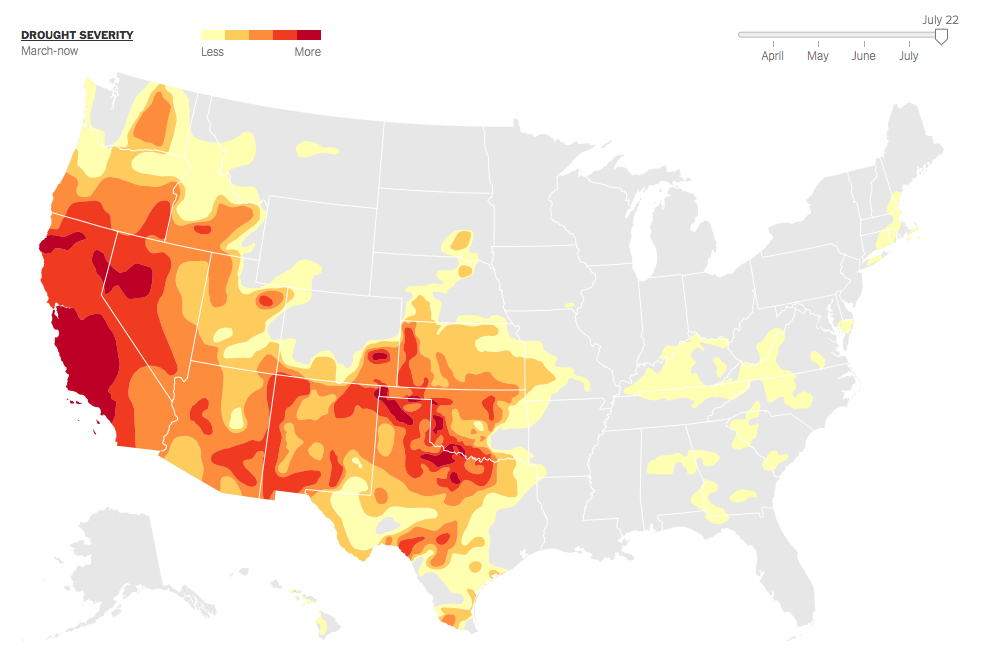 The NYT has an fascinating and detailed article bursting with charts and statistics that shows the pervasive grip of the drought in the United States. The desert Southwest and West continue to be parched and scorching. This is not a pretty picture for farmers and increasingly for those (sub-)urban dwellers who rely upon a fragile and dwindling water supply.

Droughts appear to be intensifying over much of the West and Southwest as a result of global warming. Over the past decade, droughts in some regions have rivaled the epic dry spells of the 1930s and 1950s. About 34 percent of the contiguous United States was in at least a moderate drought as of July 22.
Things have been particularly bad in California, where state officials have approved drastic measures to reduce water consumption. California farmers, without water from reservoirs in the Central Valley, are left to choose which of their crops to water. Parts of Texas, Oklahoma and surrounding states are also suffering from drought conditions.
The relationship between the climate and droughts is complicated. Parts of the country are becoming wetter: East of the Mississippi, rainfall has been rising. But global warming also appears to be causing moisture to evaporate faster in places that were already dry. Researchers believe drought conditions in these places are likely to intensify in coming years.
There has been little relief for some places since the summer of 2012. At the recent peak this May, about 40 percent of the country was abnormally dry or in at least a moderate drought.

Read the entire story and see the statistics for yourself here.