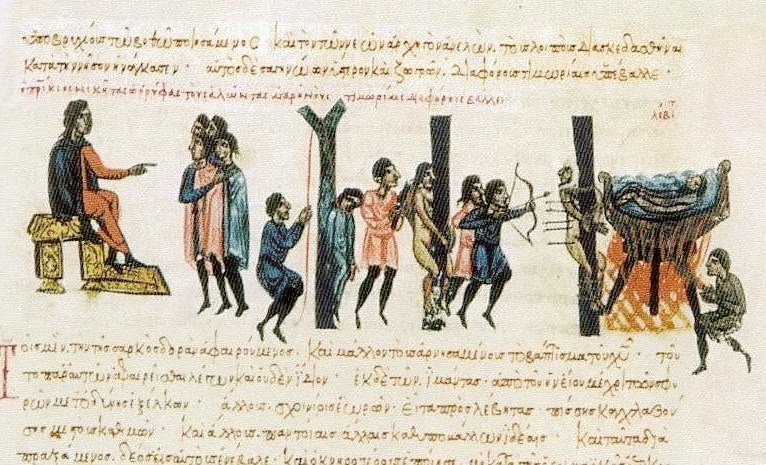 Fanatical brutality and altruism. Greed and self-sacrifice. Torture and love. Cruelty and remorse. Care and wickedness. These are the paradoxical traits that make us uniquely human. Many people give of themselves, love unconditionally, exhibit kindness, selflessness and compassion at every turn. And yet, describing the immolation, crucifixions and beheadings of fellow humans by humans as inhuman or “beastial” rather misses the point. While some animals maim and kill their own, and even feast on the spoils, humans have risen above all other species to a pinnacle of barbaric behavior that demands that we all continually reflect on our humanity, both good and evil. Sadly, this is not news: persecution of one group by another is encoded in our DNA.

It describes itself as “an inclusive school where gospel values underpin a caring and supporting ethos, manifest in care for each individual”. And I have no reason to doubt it. But one of the questions raised by the popularity of Hilary Mantel’s Wolf Hall is whether St Thomas More Catholic School is named after a monster or a saint. With Mantel, gone is the More of heroic humanism popularised by Robert Bolt’s fawning A Man for All Seasons. In its place she reminds us that More was persecutor-in-chief towards those who struggled to see the Bible translated into English and personally responsible for the burning of a number of men who dared question the ultimate authority of the Roman church.

This week’s Wolf Hall episode ended with the death of Middle Temple lawyer James Bainham at Smithfield on 30 April 1532. More tortured Bainham in the Tower of London for questioning the sanctity of Thomas Becket and for speaking out against the financial racket of the doctrine of purgatory that “picked men’s purses”. At first, under the pressure of torture, Bainham recanted his views. But within weeks of being released, Bainham re-asserted them. And so More had him burnt at the stake.

The recent immolation of Jordanian pilot Lieutenant Muadh al-Kasasbeh by Islamic State (Isis) brings home the horrendous reality of what this involves. I watched it on the internet. And I wish I hadn’t. I felt voyeuristic and complicit. And though I justified watching on the grounds that I was going to write about it, and thus (apparently) needed to see the truly horrific footage, I don’t think I was right to do so. As well as seeing things that I will never be able to un-see, I felt morally soiled – as if I had done exactly what Isis had wanted me to do. I mean, if no one ever watched this stuff,  they wouldn’t make it.

Afterwards, I wandered down to Smithfield market to get some air. I sat in a posh cafe and tried to picture what the place must have been like when Bainham was killed. Both then and now, death by burning was a staged event, deliberately public, a theatre of cruelty designed for political/religious instruction. In his book on burnings in 16th century England, the historian Eamon Duffy recounts a burning in Dartford in 1555: “‘Thither came … fruiterers wyth horse loades of cherries, and sold them’.” Can you imagine: passing round the cherries as you watch people burn? What sort of creatures are we?

Yes, religion is the common factor here. But if there is no God (as some say) and religion is a purely human phenomenon, then it is humanity that is also in the dock. For when we speak of these acts as “inhuman”, or of the “inhumanity” of Isis, we are surely kidding ourselves: history teaches that human beings are often exactly like this. We are often viciously cruel and without an ounce of pity and, yet, all too often in denial about our basic capacity for wickedness. One cannot be in denial after watching that video.

And yet the thing that it is almost impossible for us to get our heads around is that this capacity for wickedness can also co-exist with an extraordinary capacity for love and care and self-sacrifice. More, of course, is a perfect case in point. As well as being declared a saint, More was famously one of the early humanists, a friend of Erasmus. In his Utopia, he fantasised about a world where people lived together in harmony, with no private property to divide them. He championed female education and (believe it or not) religious toleration.

Robert Bolt may have only reflected one aspect of More’s character, but he did stand up for what he believed in, even to the point of death. And when More was declared a saint in 1935, it was partially a powerful and deliberate witness to German Christians to do the same. And who would have guessed that, within a few years, apparently civilized Europe would return again to the burning of human bodies, this time on an industrial scale. And this time, not in the name of God.