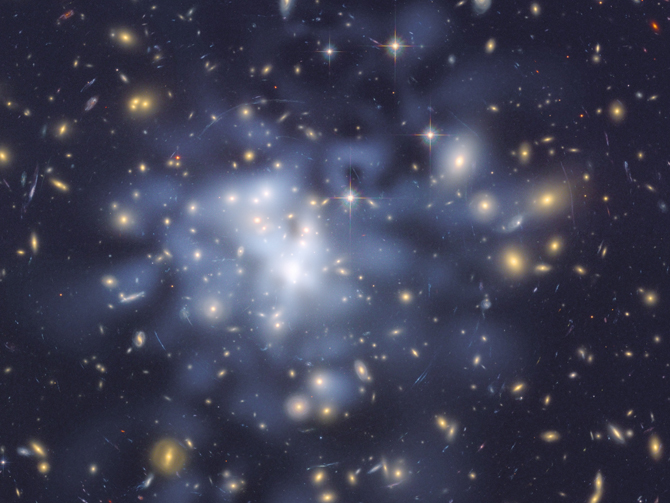 Leave aside the fact that there is no direct evidence for the existence of dark matter. In fact, theories that indirectly point to its existence seem rather questionable as well. That said, cosmologists are increasingly convinced that dark matter’s gravitational effects can be derived from recent observations of gravitationally lenses galaxy clusters. Some researchers postulate that this eerily murky non-substance — it doesn’t interact with anything in our visible universe except, perhaps, gravity — may be a cause for activities much closer to home. All very interesting.

Earlier this year, Dr. Sabine Hossenfelder, a theoretical physicist in Stockholm, made the jarring suggestion that dark matter might cause cancer. She was not talking about the “dark matter” of the genome (another term for junk DNA) but about the hypothetical, lightless particles that cosmologists believe pervade the universe and hold the galaxies together.

Though it has yet to be directly detected, dark matter is presumed to exist because we can see the effects of its gravity. As its invisible particles pass through our bodies, they could be mutating DNA, the theory goes, adding at an extremely low level to the overall rate of cancer.

It was unsettling to see two such seemingly different realms, cosmology and oncology, suddenly juxtaposed. But that was just the beginning. Shortly after Dr. Hossenfelder broached her idea in an online essay, Michael Rampino, a professor at New York University, added geology and paleontology to the picture.

Dark matter, he proposed in an article for the Royal Astronomical Society, is responsible for the mass extinctions that have periodically swept Earth, including the one that killed the dinosaurs.

His idea is based on speculations by other scientists that the Milky Way is sliced horizontally through its center by a thin disk of dark matter. As the sun, traveling around the galaxy, bobs up and down through this darkling plane, it generates gravitational ripples strong enough to dislodge distant comets from their orbits, sending them hurtling toward Earth.

An earlier version of this hypothesis was put forth last year by the Harvard physicists Lisa Randall and Matthew Reece. But Dr. Rampino has added another twist: During Earth’s galactic voyage, dark matter accumulates in its core. There the particles self-destruct, generating enough heat to cause deadly volcanic eruptions. Struck from above and below, the dinosaurs succumbed.

It is surprising to see something as abstract as dark matter take on so much solidity, at least in the human mind. The idea was invented in the early 1930s as a theoretical contrivance — a means of explaining observations that otherwise didn’t make sense.

Galaxies appear to be rotating so fast that they should have spun apart long ago, throwing off stars like sparks from a Fourth of July pinwheel. There just isn’t enough gravity to hold a galaxy together, unless you assume that it hides a huge amount of unseen matter — particles that neither emit or absorb light.

Some mavericks propose alternatives, attempting to tweak the equations of gravity to account for what seems like missing mass. But for most cosmologists, the idea of unseeable matter has become so deeply ingrained that it has become almost impossible to do without it.

Said to be five times more abundant than the stuff we can see, dark matter is a crucial component of the theory behind gravitational lensing, in which large masses like galaxies can bend light beams and cause stars to appear in unexpected parts of the sky.

That was the explanation for the spectacular observation of an “Einstein Cross” reported last month. Acting like an enormous lens, a cluster of galaxies deflected the light of a supernova into four images — a cosmological mirage. The light for each reflection followed a different path, providing glimpses of four different moments of the explosion.

But not even a galactic cluster exerts enough gravity to bend light so severely unless you postulate that most of its mass consists of hypothetical dark matter. In fact, astronomers are so sure that dark matter exists that they have embraced gravitational lensing as a tool to map its extent.

Some skeptics have wondered if this is a modern-day version of what ancient astronomers called “saving the phenomena.” With enough elaborations, a theory can account for what we see without necessarily describing reality. The classic example is the geocentric model of the heavens that Ptolemy laid out in the Almagest, with the planets orbiting Earth along paths of complex curlicues.

Ptolemy apparently didn’t care whether his filigrees were real. What was important to him was that his model worked, predicting planetary movements with great precision.

Modern scientists are not ready to settle for such subterfuge. To show that dark matter resides in the world and not just in their equations, they are trying to detect it directly.

Though its identity remains unknown, most theorists are betting that dark matter consists of WIMPs — weakly interacting massive particles. If they really exist, it might be possible to glimpse them when they interact with ordinary matter.