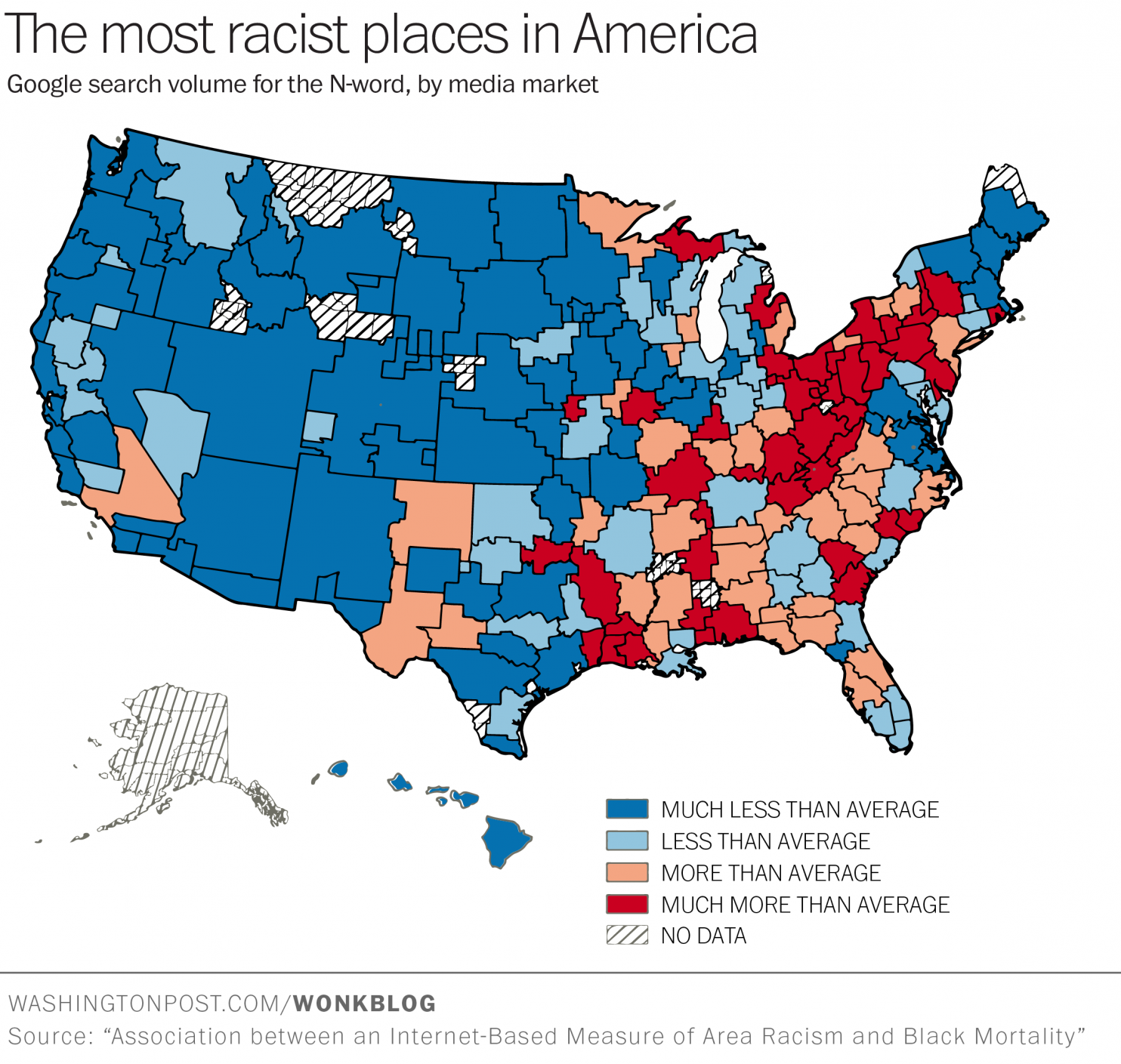 Darkest blue and light blue respectively indicate much less and less racist areas than the national average. The darkest red indicates the most racist zones.

No surprise: the areas with the highest number of racists are in the South and the rural Northeastern United States. Head west of Texas and you’ll find fewer and fewer pockets of racists. Further, and perhaps not surprisingly, the greater the degree of n-word usage the higher is the rate of black mortality.

Sadly, this map is not of 18th or 19th century America, it’s from a recent study, April 2015, posted on Public Library of Science (PLOS) ONE.

Now keep in mind that the map highlights racism through tracking of pejorative search terms such as the n-word, and doesn’t count actual people, and it’s a geographic generalization. Nonetheless it’s a stark reminder that we seem to be two nations divided by the mighty Mississippi River and we still have a very long way to go before we are all “westerners”.

Where do America’s most racist people live? “The rural Northeast and South,” suggests a new study just published in PLOS ONE.

The paper introduces a novel but makes-tons-of-sense-when-you-think-about-it method for measuring the incidence of racist attitudes: Google search data. The methodology comes from data scientist Seth Stephens-Davidowitz. He’s used it before to measure the effect of racist attitudes on Barack Obama’s electoral prospects.

“Google data, evidence suggests, are unlikely to suffer from major social censoring,” Stephens-Davidowitz wrote in a previous paper. “Google searchers are online and likely alone, both of which make it easier to express socially taboo thoughts. Individuals, indeed, note that they are unusually forthcoming with Google.” He also notes that the Google measure correlates strongly with other standard measures social science researchers have used to study racist attitudes.

This is important, because racism is a notoriously tricky thing to measure. Traditional survey methods don’t really work — if you flat-out ask someone if they’re racist, they will simply tell you no. That’s partly because most racism in society today operates at the subconscious level, or gets vented anonymously online.

For the PLOS ONE paper, researchers looked at searches containing the N-word. People search frequently for it, roughly as often as searches for  “migraine(s),” “economist,” “sweater,” “Daily Show,” and “Lakers.” (The authors attempted to control for variants of the N-word not necessarily intended as pejoratives, excluding the “a” version of the word that analysis revealed was often used “in different contexts compared to searches of the term ending in ‘-er’.”)

Image: Association between an Internet-Based Measure of Area Racism and Black Mortality. Courtesy of Washington Post / PLOS (Public Library of Science) ONE.