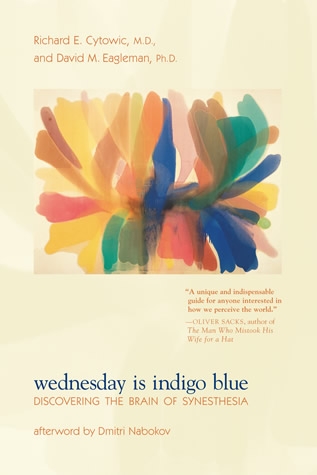 Jonathan Jackson has a very rare form of a rare neurological condition. He has synesthesia, which is a cross-connection of two (or more) unrelated senses where an perception in one sense causes an automatic experience in another sense. Some synesthetes, for instance, see various sounds or musical notes as distinct colors (chromesthesia), others perceive different words as distinct tastes (lexical-gustatory synesthesia).

Jackson, on the other hand, experiences his thoughts as shapes in a visual mindmap. This is so fascinating I’ve excerpted a short piece of his story below.

Also, if you are further intrigued by this subject I recommend three great reads on the subject: Wednesday Is Indigo Blue: Discovering the Brain of Synesthesia by Richard Cytowic, and David M. Eagleman; Musicophilia: Tales of Music and the Brain, by Oliver Sacks; The Man Who Tasted Shapes by Richard Cytowic.

One spring evening in the mid 2000s, Jonathan Jackson and Andy Linscott sat on some seaside rocks near their college campus, smoking the kind of cigarettes reserved for heartbreak. Linscott was, by his own admission, “emotionally spewing” over a girl, and Jackson was consoling him.

Jackson had always been a particularly good listener. But in the middle of their talk, he did something Linscott found deeply odd.

“He got up and jumped over to this much higher rock,” Linscott says. “He was like, ‘Andy, I’m listening, I just want to get a different angle. I want to see what you’re saying and the shape of your words from a different perspective.’ I was baffled.”

For Jackson, moving physically to think differently about an idea seemed totally natural. “People say, ‘Okay, we need to think about this from a new angle’ all the time!” he says. “But for me that’s literal.”

Jackson has synesthesia, a neurological phenomenon that has long been defined as the co-activation of two or more conventionally unrelated senses. Some synesthetes see music (known as auditory-visual synesthesia) or read letters and numbers in specific hues (grapheme-color synesthesia). But recent research has complicated that definition, exploring where in the sensory process those overlaps start and opening up the term to include types of synesthesia in which senses interact in a much more complex manner.