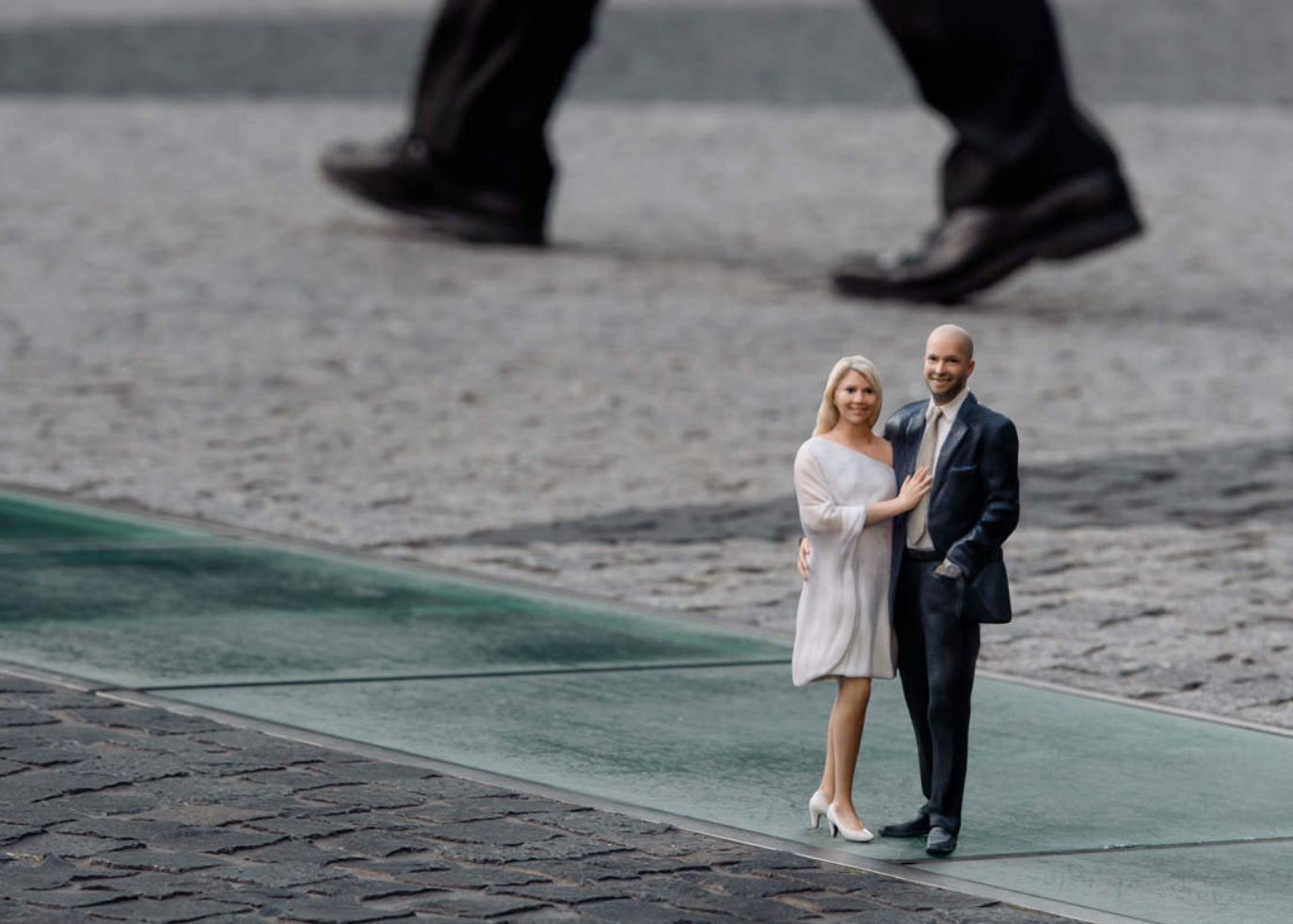 If you know a dedicated and impassioned narcissist it’s time to convince him or her to ditch the selfie. Oh, and please ensure she or he discards the selfie-stick while they’re at it. You see, the selfie — that ubiquitous expression of the me-me-generation — is now rather passé.

So, where does a self-absorbed individual turn next? Enter the 3D printed version of yourself courtesy of a German company called DOOB 3D, with its Dooblicator scanner and high-res 3D printer. Connoisseurs of self can now — for a mere $395 — replicate themselves with a 10-inch facsimile. If you’re a cheapskate, you can get a Playmobil-sized replica for $95; while a 14-inch selfie-doll will fetch you $695. Love it!

To learn more about DOOB 3D visit their website.

We love looking at images of ourselves. First there were Olan Mills portraits. Nowadays there are selfies and selfie-stick selfies and drone selfies.

If you’re wondering what comes next, Dusseldorf-based DOOB 3D thinks it has the answer—and contrary to what the company’s name suggests, it doesn’t involve getting high and watching Avatar.

DOOB 3D can produce a detailed, four-inch figurine of your body—yes, a 3-D selfie. Making one of these figurines requires a massive pile of hardware and software: 54 DSLRs, 54 lenses, a complex 3-D modeling pipeline, and an $80,000 full-color 3-D printer, not to mention a room-size scanning booth.

Factor that all in and the $95 asking price for a replica of yourself that’s roughly the size of most classic Star Wars action figures doesn’t seem so bad. A Barbie-esque 10-inch model goes for $395, while a 14-inch figure that’s more along the lines of an old-school G.I. Joe doll costs $695.

The company has eight 3-D scanning booths (called “Doob-licators”) scattered in strategic locations throughout the world. There’s one in Dusseldorf, one in Tokyo, one at Santa Monica Place in Los Angeles, and one in New York City’s Chelsea Market. The company also says they’re set to add more U.S. locations soon, although details aren’t public yet.

In New York, the pop-up DOOB shop in Chelsea Market was a pretty big hit. According to Michael Anderson, CEO of DOOB 3D USA, the Doob-licator saw about 500 customers over the winter holiday season. About 10 percent of the booth’s customers got their pets Doob-licated.

“At first, (people got DOOBs made) mostly on a whim,” says Anderson of the holiday-season spike. Most people just walk up and stand in line, but you can also book an appointment in advance.

“Now that awareness has been built,” Anderson says, “there has been a shift where at least two thirds of our customers have planned ahead to get a DOOB.”

Each Doob-licator is outfitted with 54 Canon EOS Rebel T5i DSLRs, arranged in nine columns of six cameras each. You can make an appointment or just wait in line: A customer steps in, strikes a pose, and the Doob-licator operator fires all the cameras at once. That creates a full-body scan in a fraction of a second. The next step involves feeding all those 18-megapixel images through the company’s proprietary software, which creates a 3-D model of the subject.

The printing process requires more patience. The company operates three high-end 3-D printing centers to support its scanning operations: One in Germany, one in Tokyo, and one in Brooklyn. They all use 3D Systems’ ProJet 660Pro, a high-resolution (600 x 540 dpi) 3-D printer that creates full-color objects on the fly. The printer uses a resin polymer material, and the full range of CMYK color is added to each powder layer as it’s printed.

With a top printing speed of 1.1 inches per hour and a process that sometimes involves thousands of layers of powder, the process takes a few hours for the smallest-size DOOB and half a day or more for the larger ones. And depending on how many DOOBs are lined up in the queue, your mini statue takes between two and eight weeks to arrive in the mail.

Once you step inside that Doob-licator, it’s like international waters: You are largely unbound by laws and restrictions. Do you want to get naked? Go right ahead. Along with your nude statue, the company will also send you a 3-D PDF and keep your data in its database in case you want additional copies made (you can request that your data be deleted if that sounds too creepy).

Image courtesy of of DOOB 3D.