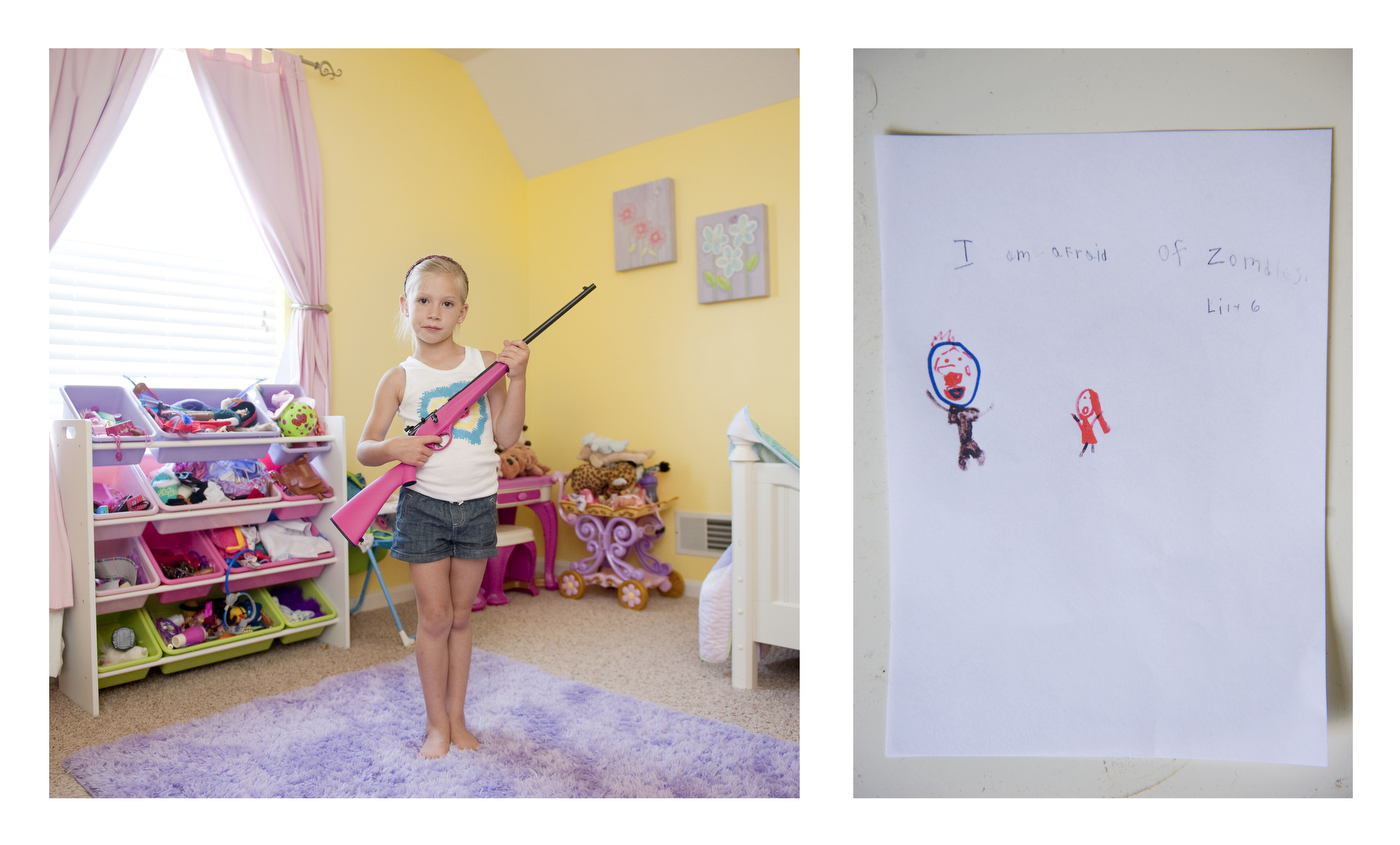 If you were asked to picture a contemporary scene populated with gun-toting children it’s possible your first thoughts might lean toward child soldiers in Chad, Burma, Central African Republic, Afghanistan or South Sudan. You’d be partially correct — that this abhorrent violation of children goes on in this world today, is incomprehensible and morally repugnant. Yet, you’d also be partially wrong.

So, think closer to home, think Louisiana, Texas, Alabama and Kentucky in the United States. A recent series of portraits titled “My First Rifle” by photographer An-Sofie Kesteleyn showcases children posing with their guns. See more of her fascinating and award-winning images here.

Approaching strangers at gun ranges across America and asking to photograph their children holding guns isn’t likely to get you the warmest reception. But that’s exactly what photographer An-Sofie Kesteleyn did last June for her series My First Rifle. “One of the only things I had going for me was that I’m not some weird-looking guy,” she says.

Kesteleyn lives in Amsterdam but visited the United States to meet gun owners about a month after reading a news story about a 5-year-old boy in Kentucky who killed his 2-year-old sister with his practice rifle. She was taken aback by the death, which was deemed an accident. Not only because it was a tragic story, but also because in the Netherlands, few people if any own guns and it was unheard of to give a 5-year-old his own firearm.

“I really wanted to know what parents and kids thought about having the guns,” she says. “For me it was hard to understand because we don’t have a gun culture at all. The only people with guns [in the Netherlands] are the police.”

Thinking Texas would be cliché, Kesteleyn started her project in Ohio and worked her way though Tennessee, Alabama, Mississippi, and Louisiana before ending in the Lone Star State. Most of the time, it was rough going. Many people didn’t want to talk about their gun ownership. More often than not, she ended up talking to gun shop or shooting range owners, the most outspoken proponents.

During the three weeks she was on the ground, about 15 people were willing to let her photograph their children with Crickett rifles, which come in variety of colors, including hot pink. She always asked to visit people at home, because photos at the gun range were too expected and Kesteleyn wanted to reveal more details about the child and the parents.

“At home it was a lot more personal,” she says.

She spent time following one young girl who owned a Crickett and tried to develop a traditional documentary story, but that didn’t pan out so she switched, mid-project, to portraits. If the parents were OK with the idea, she’s ask children to pose in their rooms, in whatever way they felt comfortable.

“By photographing them in their bedroom I thought it helped remind us that they’re kids,” she says.

Kesteleyn also had the children write down what they were most scared of and what they might use the gun to defend themselves against (zombies, dinosaurs, bears). She then photographed those letters and turned the portrait and letter into a diptych.

So far the project has been well received in Europe. But Kesteleyn has yet to show it many places in the United States worries about how people might react. Though she tried coming to the story with an open mind and didn’t develop a strong opinion one way or another, she knows some viewers might assume she has an agenda.

Kesteleyn says that the majority of parents give their kids guns to educate them and ensure they know how to properly use a firearm when they get older. At the same time, she never could shake how odd she felt standing next to a child with a gun.

“I don’t want to be like I’m against guns or pro guns, but I do think giving a child a gun is sort of like giving your kids car keys,” she says.