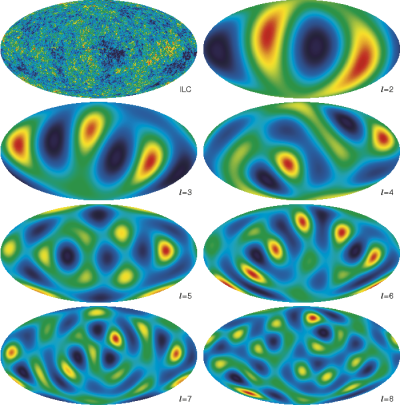 The cosmos seems remarkably uniform — look in any direction with the naked eye or the most powerful telescopes and you’ll see much the same as in any other direction. Yet, on a grand scale, our universe shows some peculiar fluctuations that have cosmologists scratching their heads. The temperature of the universe, as described by the cosmic microwave background (CMB), shows some interesting fluctuations in specific, vast regions. It is the distribution of these temperature variations that shows what seem to be non-random patterns. Cosmologists have dubbed the pattern, “axis of evil”.

The Universe is incredibly regular. The variation of the cosmos’ temperature across the entire sky is tiny: a few millionths of a degree, no matter which direction you look. Yet the same light from the very early cosmos that reveals the Universe’s evenness also tells astronomers a great deal about the conditions that gave rise to irregularities like stars, galaxies, and (incidentally) us.

That light is the cosmic microwave background, and it provides some of the best knowledge we have about the structure, content, and history of the Universe. But it also contains a few mysteries: on very large scales, the cosmos seems to have a certain lopsidedness. That slight asymmetry is reflected in temperature fluctuations much larger than any galaxy, aligned on the sky in a pattern facetiously dubbed “the axis of evil.”

The lopsidedness is real, but cosmologists are divided over whether it reveals anything meaningful about the fundamental laws of physics. The fluctuations are sufficiently small that they could arise from random chance. We have just one observable Universe, but nobody sensible believes we can see all of it. With a sufficiently large cosmos beyond the reach of our telescopes, the rest of the Universe may balance the oddity that we can see, making it a minor, local variation.

However, if the asymmetry can’t be explained away so simply, it could indicate that some new physical mechanisms were at work in the early history of the Universe. As Amanda Yoho, a graduate student in cosmology at Case Western Reserve University, told Ars, “I think the alignments, in conjunction with all of the other large angle anomalies, must point to something we don’t know, whether that be new fundamental physics, unknown astrophysical or cosmological sources, or something else.”

Over the centuries, astronomers have provided increasing evidence that Earth, the Solar System, and the Milky Way don’t occupy a special position in the cosmos. Not only are we not at the center of existence—much less the corrupt sinkhole surrounded by the pure crystal heavens, as in early geocentric Christian theology—the Universe has no center and no edge.

In cosmology, that’s elevated to a principle. The Universe is isotropic, meaning it’s (roughly) the same in every direction. The cosmic microwave background (CMB) is the strongest evidence for the isotropic principle: the spectrum of the light reaching Earth from every direction indicates that it was emitted by matter at almost exactly the same temperature.

The Big Bang model explains why. In the early years of the Universe’s history, matter was very dense and hot, forming an opaque plasma of electrons, protons, and helium nuclei. The expansion of space-time thinned out until the plasma cooled enough that stable atoms could form. That event, which ended roughly 380,000 years after the Big Bang, is known as recombination. The immediate side effect was to make the Universe transparent and liberate vast numbers of photons, most of which have traveled through space unmolested ever since.

We observe the relics of recombination in the form of the CMB. The temperature of the Universe today is about 2.73 degrees above absolute zero in every part of the sky. The lack of variation makes the cosmos nearly as close to a perfect thermal body as possible. However, measurements show anisotropies—tiny fluctuations in temperature, roughly 10 millionths of a degree or less. These irregularities later gave rise to areas where mass gathered. A perfectly featureless, isotropic cosmos would have no stars, galaxies, or planets full of humans.

To measure the physical size of these anisotropies, researchers turn the whole-sky map of temperature fluctuations into something called a power spectrum. That’s akin to the process of taking light from a galaxy and finding the component wavelengths (colors) that make it up. The power spectrum encompasses fluctuations over the whole sky down to very small variations in temperature. (For those with some higher mathematics knowledge, this process involves decomposing the temperature fluctuations in spherical harmonics.)

Smaller details in the fluctuations tell cosmologists the relative amounts of ordinary matter, dark matter, and dark energy. However, some of the largest fluctuations—covering one-fourth, one-eighth, and one-sixteenth of the sky—are bigger than any structure in the Universe, therefore representing temperature variations across the whole sky.

Those large-scale fluctuations in the power spectrum are where something weird happens. The temperature variations are both larger than expected and aligned with each other to a high degree. That’s at odds with theoretical expectations: the CMB anisotropies should be randomly oriented, not aligned. In fact, the smaller-scale variations are random, which makes the deviation at larger scales that much stranger.

Kate Land and Joao Magueijo jokingly dubbed the strange alignment “the axis of evil” in a 2005 paper (freely available on the ArXiv), riffing on an infamous statement by then-US President George W. Bush. Their findings were based on data from an earlier observatory, the Wilkinson Microwave Anisotropy Probe (WMAP), but the follow-up Planck mission found similar results. There’s no question that the “axis of evil” is there; cosmologists just have to figure out what to think about it.

The task of interpretation is complicated by what’s called “cosmic variance,” or the fact that our observable Universe is just one region in a larger Universe. Random chance dictates that some pockets of the whole Universe will have larger or smaller fluctuations than others, and those fluctuations might even be aligned entirely by coincidence.

In other words, the “axis of evil” could very well be an illusion, a pattern that wouldn’t seem amiss if we could see more of the Universe. However, cosmic variance also predicts how big those local, random deviations should be—and the fluctuations in the CMB data are larger. They’re not so large as to rule out the possibility of a local variation entirely—they’re above-average height—but cosmologists can’t easily dismiss the possibility that something else is going on.