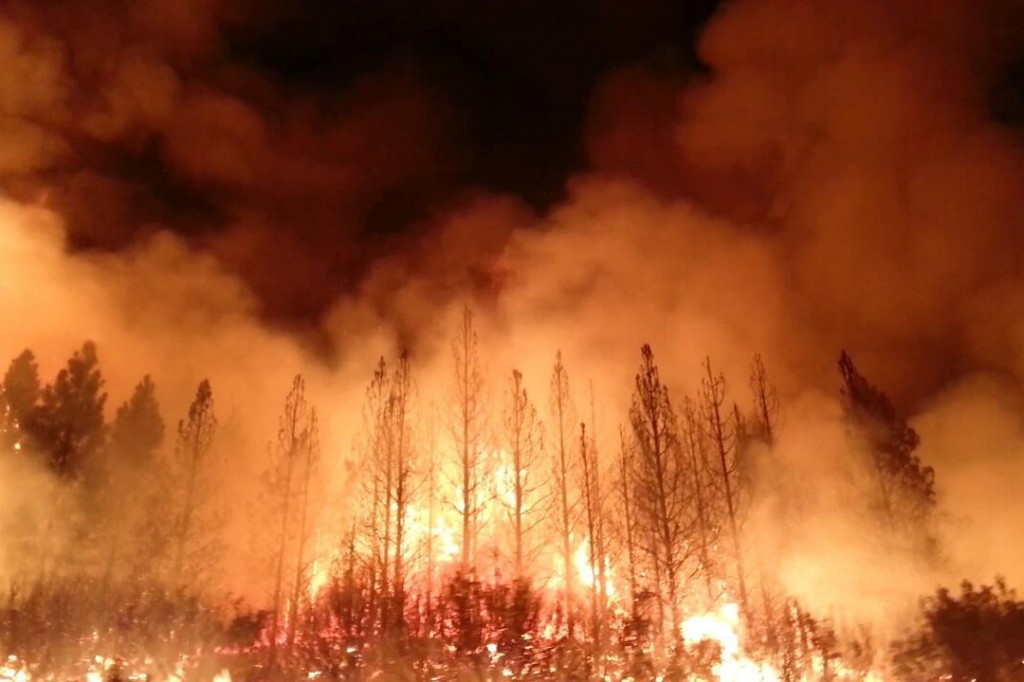 One of the largest wildfires in California history — the Rim Fire — threatens some of the most spectacular vistas in the U.S. Yet, as it reshaped part of Yosemite Valley and surroundings it is forcing another reshaping: a fundamental re-thinking of the wildland urban interface (WUI) and the role of human activity in catalyzing natural processes.

For nearly two weeks, the nation has been transfixed by wildfire spreading through Yosemite National Park, threatening to pollute San Francisco’s water supply and destroy some of America’s most cherished landscapes. As terrible as the Rim Fire seems, though, the question of its long-term effects, and whether in some ways it could actually be ecologically beneficial, is a complicated one.

Some parts of Yosemite may be radically altered, entering entire new ecological states. Yet others may be restored to historical conditions that prevailed for for thousands of years from the last Ice Age’s end until the 19th century, when short-sighted fire management disrupted natural fire cycles and transformed the landscape.

In certain areas, “you could absolutely consider it a rebooting, getting the system back to the way it used to be,” said fire ecologist Andrea Thode of Northern Arizona University. “But where there’s a high-severity fire in a system that wasn’t used to having high-severity fires, you’re creating a new system.”

The Rim Fire now covers 300 square miles, making it the largest fire in Yosemite’s recent history and the sixth-largest in California’s. It’s also the latest in a series of exceptionally large fires that over the last several years have burned across the western and southwestern United States.

Fire is a natural, inevitable phenomenon, and one to which western North American ecologies are well-adapted, and even require to sustain themselves. The new fires, though, fueled by drought, a warming climate and forest mismanagement — in particular the buildup of small trees and shrubs caused by decades of fire suppression — may reach sizes and intensities too severe for existing ecosystems to withstand.

The Rim Fire may offer some of both patterns. At high elevations, vegetatively dominated by shrubs and short-needled conifers that produce a dense, slow-to-burn mat of ground cover, fires historically occurred every few hundred years, and they were often intense, reaching the crowns of trees. In such areas, the current fire will fit the usual cycle, said Thode.

Decades- and centuries-old seeds, which have remained dormant in the ground awaiting a suitable moment, will be cracked open by the heat, explained Thode. Exposed to moisture, they’ll begin to germinate and start a process of vegetative succession that results again in forests.

At middle elevations, where most of the Rim Fire is currently concentrated, a different fire dynamic prevails. Those forests are dominated by long-needled conifers that produce a fluffy, fast-burning ground cover. Left undisturbed, fires occur regularly.

“Up until the middle of the 20th century, the forests of that area would burn very frequently. Fires would go through them every five to 12 years,” said Carl Skinner, a U.S. Forest Service ecologist who specializes in relationships between fire and vegetation in northern California. “Because the fires burned as frequently as they did, it kept fuels from accumulating.”

A desire to protect houses, commercial timber and conservation lands by extinguishing these small, frequent fires changed the dynamic. Without fire, dead wood accumulated and small trees grew, creating a forest that’s both exceptionally flammable and structurally suited for transferring flames from ground to tree-crown level, at which point small burns can become infernos.

Though since the 1970s some fires have been allowed to burn naturally in the western parts of Yosemite, that’s not the case where the Rim Fire now burns, said Skinner. An open question, then, is just how big and hot it will burn.

Where the fire is extremely intense, incinerating soil seed banks and root structures from which new trees would quickly sprout, the forest won’t come back, said Skinner. Those areas will become dominated by dense, fast-growing shrubs that burn naturally every few years, killing young trees and creating a sort of ecological lock-in.

If the fire burns at lower intensities, though, it could result in a sort of ecological recalibration, said Skinner. In his work with fellow U.S. Forest Service ecologist Eric Knapp at the Stanislaus-Tuolumne Experimental Forest, Skinner has found that Yosemite’s contemporary, fire-suppressed forests are actually far more homogeneous and less diverse than a century ago.

The fire could “move the forests in a trajectory that’s more like the historical,” said Skinner, both reducing the likelihood of large future fires and generating a mosaic of habitats that contain richer plant and animal communities.

“It may well be that, across a large landscape, certain plants and animals are adapted to having a certain amount of young forest recovering after disturbances,” said forest ecologist Dan Binkley of Colorado State University. “If we’ve had a century of fires, the landscape might not have enough of this.”

History will probably show that humans are the likely cause for the mass disappearance and death of honey bees around the world.

So, while ecologists try to understand why and how to reverse bee death and colony collapse, engineers are busy building alternatives to our once nectar-loving friends. Meet RoboBee, also known as the Micro Air Vehicles Project.

We take for granted the effortless flight of insects, thinking nothing of swatting a pesky fly and crushing its wings. But this insect is a model of complexity. After 12 years of work, researchers at the Harvard School of Engineering and Applied Sciences have succeeded in creating a fly-like robot. And in early May, they announced that their tiny RoboBee (yes, it’s called a RoboBee even though it’s based on the mechanics of a fly) took flight. In the future, that could mean big things for everything from disaster relief to colony collapse disorder.

The RoboBee isn’t the only miniature flying robot in existence, but the 80-milligram, quarter-sized robot is certainly one of the smallest. “The motivations are really thinking about this as a platform to drive a host of really challenging open questions and drive new technology and engineering,” says Harvard professor Robert Wood, the engineering team lead for the project.

When Wood and his colleagues first set out to create a robotic fly, there were no off the shelf parts for them to use. “There were no motors small enough, no sensors that could fit on board. The microcontrollers, the microprocessors–everything had to be developed fresh,” says Wood. As a result, the RoboBee project has led to numerous innovations, including vision sensors for the bot, high power density piezoelectric actuators (ceramic strips that expand and contract when exposed to an electrical field), and a new kind of rapid manufacturing that involves layering laser-cut materials that fold like a pop-up book. The actuators assist with the bot’s wing-flapping, while the vision sensors monitor the world in relation to the RoboBee.

“Manufacturing took us quite awhile. Then it was control, how do you design the thing so we can fly it around, and the next one is going to be power, how we develop and integrate power sources,” says Wood. In a paper recently published by Science, the researchers describe the RoboBee’s power quandary: it can fly for just 20 seconds–and that’s while it’s tethered to a power source. “Batteries don’t exist at the size that we would want,” explains Wood. The researchers explain further in the report: ” If we implement on-board power with current technologies, we estimate no more than a few minutes of untethered, powered flight. Long duration power autonomy awaits advances in small, high-energy-density power sources.”

The RoboBees don’t last a particularly long time–Wood says the flight time is “on the order of tens of minutes”–but they can keep flapping their wings long enough for the Harvard researchers to learn everything they need to know from each successive generation of bots. For commercial applications, however, the RoboBees would need to be more durable.