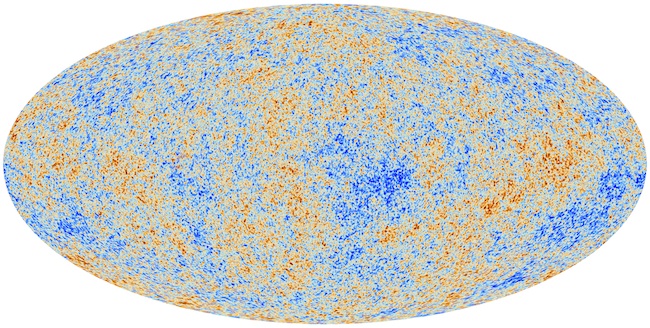 It was surely a quiet news day on March 21 2013 — most major online news outlets showed a fresh map of the Cosmic Microwave Background (CMB) on the front page. It was taken by the Planck Telescope, operated by the European Space Agency, over a period of 15 months. The image shows a landscape of primordial cosmic microwaves from when the universe was only around 380,000 years old, and is often referred to as “first light”.

Acquired by ESA’s Planck space telescope, the most detailed map ever created of the cosmic microwave background – the relic radiation from the Big Bang – was released today revealing the existence of features that challenge the foundations of our current understanding of the Universe.

The image is based on the initial 15.5 months of data from Planck and is the mission’s first all-sky picture of the oldest light in our Universe, imprinted on the sky when it was just 380 000 years old.

At that time, the young Universe was filled with a hot dense soup of interacting protons, electrons and photons at about 2700ºC. When the protons and electrons joined to form hydrogen atoms, the light was set free. As the Universe has expanded, this light today has been stretched out to microwave wavelengths, equivalent to a temperature of just 2.7 degrees above absolute zero.

This ‘cosmic microwave background’ – CMB – shows tiny temperature fluctuations that correspond to regions of slightly different densities at very early times, representing the seeds of all future structure: the stars and galaxies of today.

According to the standard model of cosmology, the fluctuations arose immediately after the Big Bang and were stretched to cosmologically large scales during a brief period of accelerated expansion known as inflation.

Planck was designed to map these fluctuations across the whole sky with greater resolution and sensitivity than ever before. By analysing the nature and distribution of the seeds in Planck’s CMB image, we can determine the composition and evolution of the Universe from its birth to the present day.

Overall, the information extracted from Planck’s new map provides an excellent confirmation of the standard model of cosmology at an unprecedented accuracy, setting a new benchmark in our manifest of the contents of the Universe.

But because precision of Planck’s map is so high, it also made it possible to reveal some peculiar unexplained features that may well require new physics to be understood.

“The extraordinary quality of Planck’s portrait of the infant Universe allows us to peel back its layers to the very foundations, revealing that our blueprint of the cosmos is far from complete. Such discoveries were made possible by the unique technologies developed for that purpose by European industry,” says Jean-Jacques Dordain, ESA’s Director General.

“Since the release of Planck’s first all-sky image in 2010, we have been carefully extracting and analysing all of the foreground emissions that lie between us and the Universe’s first light, revealing the cosmic microwave background in the greatest detail yet,” adds George Efstathiou of the University of Cambridge, UK.

One of the most surprising findings is that the fluctuations in the CMB temperatures at large angular scales do not match those predicted by the standard model – their signals are not as strong as expected from the smaller scale structure revealed by Planck.