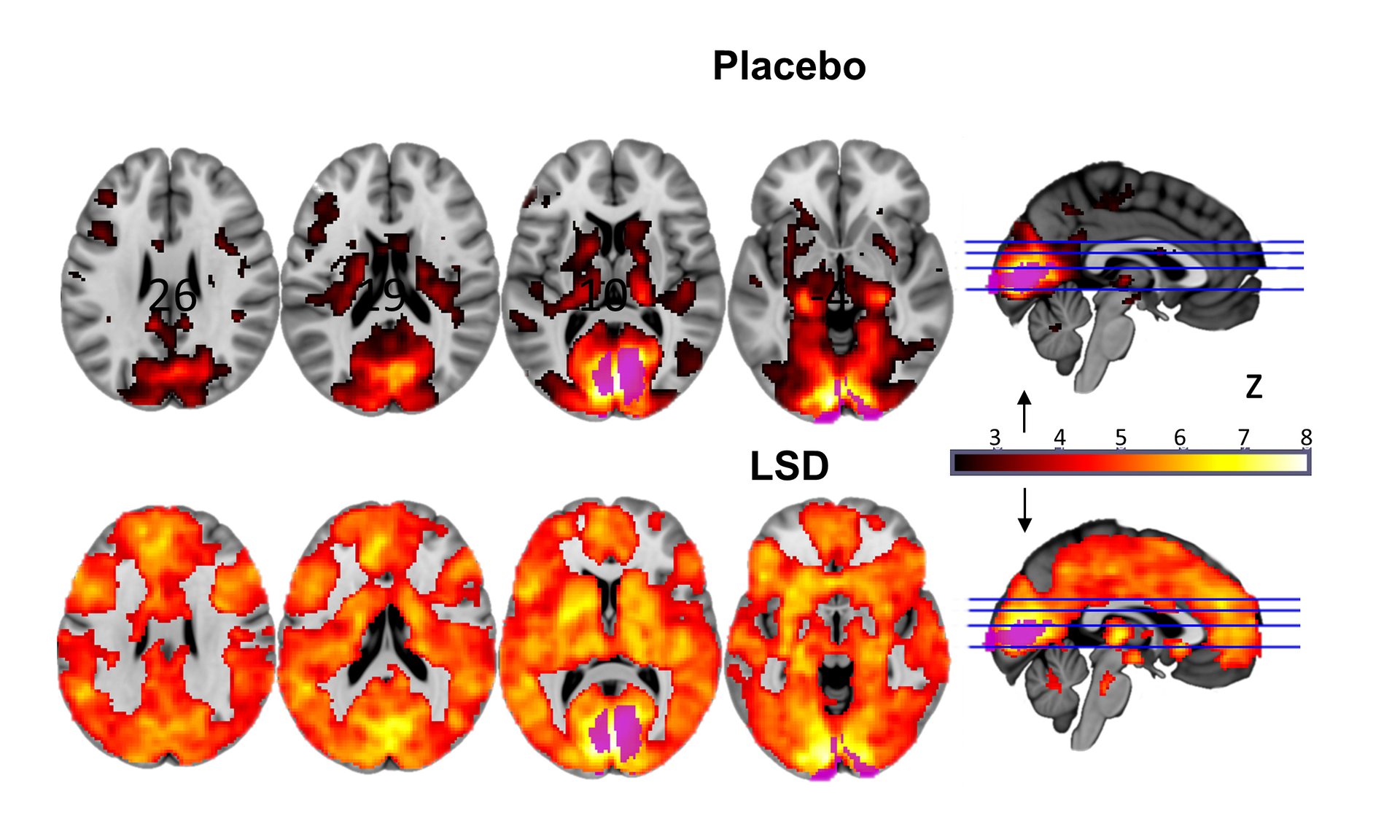 For the first time, researchers have peered inside the brain to study the realtime effect of the psychedelic drug LSD (lysergic acid diethylamide). Yes, neuroscientists scanned the brains of subjects who volunteered to take a trip inside an MRI scanner, all in the name of science.

While the researchers did not seem to document the detailed subjective experiences of their volunteers, the findings suggest that they were experiencing intense dreamlike visions, effectively “seeing with their eyes shut”. Under the influence of LSD many areas of the brain that are usually compartmentalized showed far greater interconnection and intense activity.

LSD was first synthesized in 1938. Its profound psychological properties were studied from the mid-1940s to the early sixties. The substance was later banned — worldwide — after its adoption as a recreational drug.

This new study was conducted by researchers from Imperial College London and The Beckley Foundation, which researches psychoactive substances.

The profound impact of LSD on the brain has been laid bare by the first modern scans of people high on the drug.

The images, taken from volunteers who agreed to take a trip in the name of science, have given researchers an unprecedented insight into the neural basis for effects produced by one of the most powerful drugs ever created.

A dose of the psychedelic substance – injected rather than dropped – unleashed a wave of changes that altered activity and connectivity across the brain. This has led scientists to new theories of visual hallucinations and the sense of oneness with the universe some users report.

The brain scans revealed that trippers experienced images through information drawn from many parts of their brains, and not just the visual cortex at the back of the head that normally processes visual information. Under the drug, regions once segregated spoke to one another.

Further images showed that other brain regions that usually form a network became more separated in a change that accompanied users’ feelings of oneness with the world, a loss of personal identity called “ego dissolution”.

David Nutt, the government’s former drugs advisor, professor of neuropsychopharmacology at Imperial College London, and senior researcher on the study, said neuroscientists had waited 50 years for this moment. “This is to neuroscience what the Higgs boson was to particle physics,” he said. “We didn’t know how these profound effects were produced. It was too difficult to do. Scientists were either scared or couldn’t be bothered to overcome the enormous hurdles to get this done.”

Image: Different sections of the brain, either on placebo, or under the influence of LSD (lots of orange). Courtesy: Imperial College/Beckley Foundation.

When a friend hits her thumb with a hammer, you don’t have to put much effort into imagining how this feels. You know it immediately. You will probably tense up, your “Ouch!” may arise even quicker than your friend’s, and chances are that you will feel a little pain yourself. Of course, you will then thoughtfully offer consolation and bandages, but your initial reaction seems just about automatic. Why?

Neuroscience now offers you an answer: A recent line of research has demonstrated that seeing other people being touched activates primary sensory areas of your brain, much like experiencing the same touch yourself would do. What these findings suggest is beautiful in its simplicity—that you literally “feel with” others.

There is no denying that the exceptional interpersonal understanding we humans show is by and large a product of our emotional responsiveness. We are automatically affected by other people’s feelings, even without explicit communication. Our involvement is sometimes so powerful that we have to flee it, turning our heads away when we see someone get hurt in a movie. Researchers hold that this capacity emerged long before humans evolved. However, only quite recently has it been given a name: A mere hundred years ago, the word “Empathy”—a combination of the Greek “in” (em-) and “feeling” (pathos)—was coined by the British psychologist E. B. Titchener during his endeavor to translate the German Einfühlungsvermögen (“the ability to feel into”).

Despite the lack of a universally agreed-upon definition of empathy, the mechanisms of sharing and understanding another’s experience have always been of scientific and public interest—and particularly so since the introduction of “mirror neurons.” This important discovery was made two decades ago by  Giacomo Rizzolatti and his co-workers at the University of Parma, who were studying motor neuron properties in macaque monkeys. To compensate for the tedious electrophysiological recordings required, the monkey was occasionally given food rewards. During these incidental actions something unexpected happened: When the monkey, remaining perfectly still, saw the food being grasped by an experimenter in a specific way, some of its motor neurons discharged. Remarkably, these neurons normally fired when the monkey itself grasped the food in this way. It was as if the monkey’s brain was directly mirroring the actions it observed. This “neural resonance,” which was later also demonstrated in humans, suggested the existence of a special type of “mirror” neurons that help us understand other people’s actions.

Do you find yourself wondering, now, whether a similar mirror mechanism could have caused your pungent empathic reaction to your friend maltreating herself with a hammer? A group of scientists led by Christian Keysers believed so. The researchers had their participants watch short movie clips of people being touched, while using functional magnetic resonance imaging (fMRI) to record their brain activity. The brain scans revealed that the somatosensory cortex, a complex of brain regions processing touch information, was highly active during the movie presentations—although participants were not being touched at all. As was later confirmed by other studies, this activity strongly resembled the somatosensory response participants showed when they were actually touched in the same way. A recent study by Esther Kuehn and colleagues even found that, during the observation of a human hand being touched, parts of the somatosensory cortex were particularly active when (judging by perspective) the hand clearly belonged to another person. Adrian Owen still gets animated when he talks about patient 23. The patient was only 24 years old when his life was devastated by a car accident. Alive but unresponsive, he had been languishing in what neurologists refer to as a vegetative state for five years, when Owen, a neuro-scientist then at the University of Cambridge, UK, and his colleagues at the University of Liège in Belgium, put him into a functional magnetic resonance imaging (fMRI) machine and started asking him questions.

Incredibly, he provided answers. A change in blood flow to certain parts of the man’s injured brain convinced Owen that patient 23 was conscious and able to communicate. It was the first time that anyone had exchanged information with someone in a vegetative state.

Patients in these states have emerged from a coma and seem awake. Some parts of their brains function, and they may be able to grind their teeth, grimace or make random eye movements. They also have sleep–wake cycles. But they show no awareness of their surroundings, and doctors have assumed that the parts of the brain needed for cognition, perception, memory and intention are fundamentally damaged. They are usually written off as lost.

Owen’s discovery, reported in 2010, caused a media furore. Medical ethicist Joseph Fins and neurologist Nicholas Schiff, both at Weill Cornell Medical College in New York, called it a “potential game changer for clinical practice”. The University of Western Ontario in London, Canada, soon lured Owen away from Cambridge with Can$20 million (US$19.5 million) in funding to make the techniques more reliable, cheaper, more accurate and more portable — all of which Owen considers essential if he is to help some of the hundreds of thousands of people worldwide in vegetative states. “It’s hard to open up a channel of communication with a patient and then not be able to follow up immediately with a tool for them and their families to be able to do this routinely,” he says.

Many researchers disagree with Owen’s contention that these individuals are conscious. But Owen takes a practical approach to applying the technology, hoping that it will identify patients who might respond to rehabilitation, direct the dosing of analgesics and even explore some patients’ feelings and desires. “Eventually we will be able to provide something that will be beneficial to patients and their families,” he says.

Still, he shies away from asking patients the toughest question of all — whether they wish life support to be ended — saying that it is too early to think about such applications. “The consequences of asking are very complicated, and we need to be absolutely sure that we know what to do with the answers before we go down this road,” he warns.

Lost and found
With short, reddish hair and beard, Owen is a polished speaker who is not afraid of publicity. His home page is a billboard of links to his television and radio appearances. He lectures to scientific and lay audiences with confidence and a touch of defensiveness.

Owen traces the roots of his experiments to the late 1990s, when he was asked to write a review of clinical applications for technologies such as fMRI. He says that he had a “weird crisis of confidence”. Neuroimaging had confirmed a lot of what was known from brain mapping studies, he says, but it was not doing anything new. “We would just tweak a psych test and see what happens,” says Owen. As for real clinical applications: “I realized there weren’t any. We all realized that.”

Owen wanted to find one. He and his colleagues got their chance in 1997, with a 26-year-old patient named Kate Bainbridge. A viral infection had put her in a coma — a condition that generally persists for two to four weeks, after which patients die, recover fully or, in rare cases, slip into a vegetative or a minimally conscious state — a more recently defined category characterized by intermittent hints of conscious activity.

A common premise of “mad scientists” in science fiction movies: a computer reconstructs video images from someone’s thoughts via a brain scanning device. Yet, now this is no longer the realm of fantasy. Researchers from the University of California at Berkeley have successfully decoded and reconstructed people’s dynamic visual experiences – in this case watching Hollywood movie trailers –using functional Magnetic Resonance Imaging (fMRI) and computer simulation models.

Watch the stunning video clip below showing side-by-side movies of what a volunteer was actually watching and a computer reconstruction of fMRI data from the same volunteer.

The results are a rudimentary first step, with the technology requiring decades of refinement before the fiction of movies, such as Brainstorm, becomes a closer reality. However, this groundbreaking research nonetheless paves the way to a future of tremendous promise in brain science. Imagine the ability to reproduce and share images of our dreams and memories, or peering into the brain of a comatose patient.