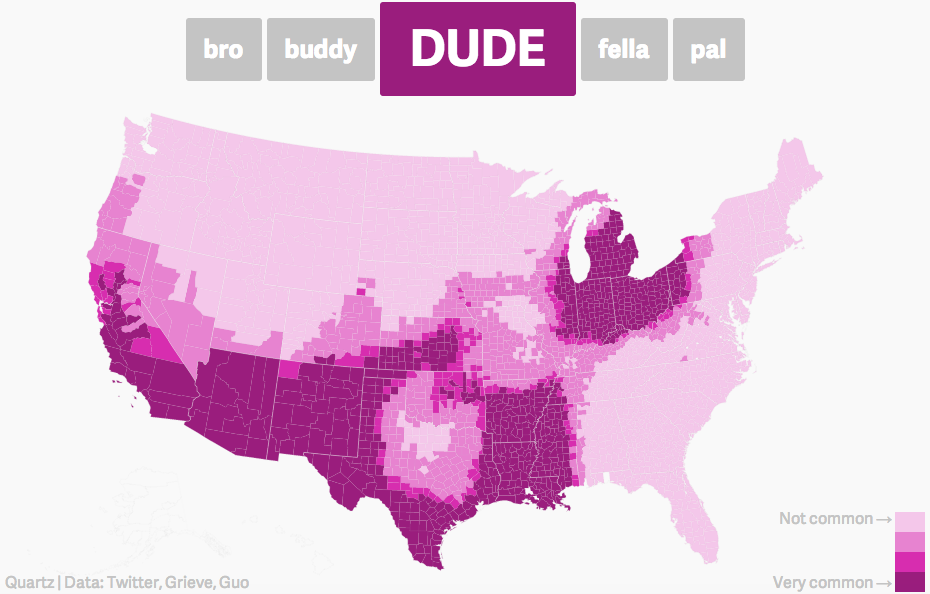 If you’re a male in Texas and have one or more BFFs, then chances are that you refer to each of them as “bro”. If you and your BFFs hang out in the deep south, then you’re more likely to call them “fella”. Fans of the Big Lebowski will be glad to hear the “dude” lives on — but mostly only in California, Southwestern US and around the Great Lakes.

A new mobile app lets you share all your intimate details with a stranger for 20 days. The fascinating part of this social experiment is that the stranger remains anonymous throughout. The app known as 20 Day Stranger is brought to us by the venerable MIT Media Lab. It may never catch on, but you can be sure that psychologists are gleefully awaiting some data.

Social media is all about connecting with people you know, people you sort of know, or people you want to know. But what about all those people you didn’t know you wanted to know? They’re out there, too, and the new iPhone app 20 Day Stranger wants to put you in touch with them. Created by the MIT Media Lab’s Playful Systems research group, the app connects strangers and allows them to update each other about any and every detail of their lives for 20 days. But the people are totally anonymous and can interact directly only at the end of their 20 days together, when they can exchange one message each.

20 Day Stranger uses information from the iPhone’s sensors to alert your stranger-friend when you wake up (and start moving the phone), when you’re in a car or bus (from GPS tracking), and where you are. But it isn’t totally privacy-invading: The app also takes steps to keep both people anonymous. When it shows your stranger-friend that you’re walking around somewhere, it accompanies the notification with images from a half-mile radius of where you actually are on Google Maps. Your stranger-friend might be able to figure out what area you’re in, or they might not.

Kevin Slavin, the director of Playful Systems, explained to Fast Company that the app’s goal is to introduce people online in a positive and empathetic way, rather than one that’s filled with suspicion or doubt. Though 20 Day Stranger is currently being beta tested, Playful Systems’ goal is to generally release it in the App Store. But the group is worried about getting people to adopt it all over instead of building up user bases in certain geographic areas. “There’s no one type of person what will make it useful,” Slavin said. “It’s the heterogeneous quality of everyone in aggregate. Which is a bad [promotional] strategy if you’re making commercial software.”

At this point it’s not that rare to interact frequently with someone you’ve never met in person on social media. What’s unusual it not to know their name or anything about who they are. But an honest window into another person’s life without the pressure of identity could expand your worldview and maybe even stimulate introspection. It sounds like a step up from Secret, that’s for sure.