Call it what you may, but ’tis the season following the gift-giving season, which means only one thing, it’s returns season. Did you receive a gorgeous pair of shoes in the wrong size? Return. Did you get yet another hideous tie or shirt in the wrong color? Return. Yet more lotion that makes you break out in an orange rash? Return? Video game in the wrong format or book that you already digested last year? Return. Toaster that doesn’t match your kitchen decor? Return.

And, the numbers of returns are quite staggering. According to Optoro — a research firm that helps major retailers process and resell returns — consumers return nearly $70 billion worth of purchases during the holiday season. That’s more than the entire GDP of countries like Luxembourg or Sri Lanka.

So, with returns being such a huge industry how does the process work? Importantly, a returned gift is highly unlikely to end up back on the original shelf from where it was purchased. Rather, the gift is often transported by an inverse supply-chain — known as reverse logistics — from the consumer back to the retailer, sometimes back to a wholesaler, and then back to a liquidator. Importantly, up to 40 percent of returns don’t even make it back to a liquidator since it’s sometimes more economical for the retailer to discard the item.

For most retailers, the weeks leading up to Christmas are a frenzied crescendo of activity. But for Michael Ringelsten, the excitement starts after the holidays.

Ringelsten runs Shorewood Liquidators, which collects all those post-holiday returns—from unwanted gadgets and exercise equipment to office furniture and popcorn machines—and finds them a new home. Wait, what? A new home? Yep. Rejected gifts and returned goods don’t go back on the shelves from which they came. They follow an entirely different logistical path, a weird mirror image of the supply chain that brings the goods we actually want to our doors.

This parallel process exists because the cost of restocking and reselling returned items often exceeds the value of those items. To cut their losses, online retailers often turn to folks like Ringelsten.

I discovered Shorewood Liquidators through a rather low rent-looking online ad touting returned items from The Home Depot, Amazon, Sears, Wal-Mart, and other big retailers. I was surprised to find the items weren’t bad. Some were an out-and-out deal, like this comfy Arcadia recliner (perfect for my next Shark Tank marathon). Bidding starts at 99 cents for knickknacks or $5 for nicer stuff. The descriptions state whether there are scuffs, scratches, or missing parts.

“This recliner? It will definitely sell,” Ringelsten says. Shorewood employs 91 people who work out of a 100,000-square-foot warehouse in Illinois—a space that, after the holidays, is a Through the Looking Glass version of Amazon, selling unwanted gifts at rock-bottom prices. And as Americans buy more and more holiday gifts online, they’re also returning more, creating new opportunities for businesses prepared to handle what others don’t want. Call it “re-commerce.”

The Hidden World of Returns

UPS says last week it saw the highest volume of returns it expects to see all year, with people sending back more than 5 million gifts and impulse purchases. On the busiest day of that week, the shipper said, people sent back twice as many packages—1 million in all—than the same day a year ago.

But those returns often don’t return from whence they came. Instead, they’re shipped to returns facilities—some operated by retailers, others that serve as hubs for many sellers. Once there, the goods are collected, processed, and often resold by third-party contractors, including wholesalers and liquidators like Shorewood. These contractors often use software that determines the most profitable path, be it selling them to consumers online, selling them in lots to wholesale buyers, or simply recycling them. If none of these options is profitable, the item may well end up in a landfill, making the business of returns an environmental issue, as well. 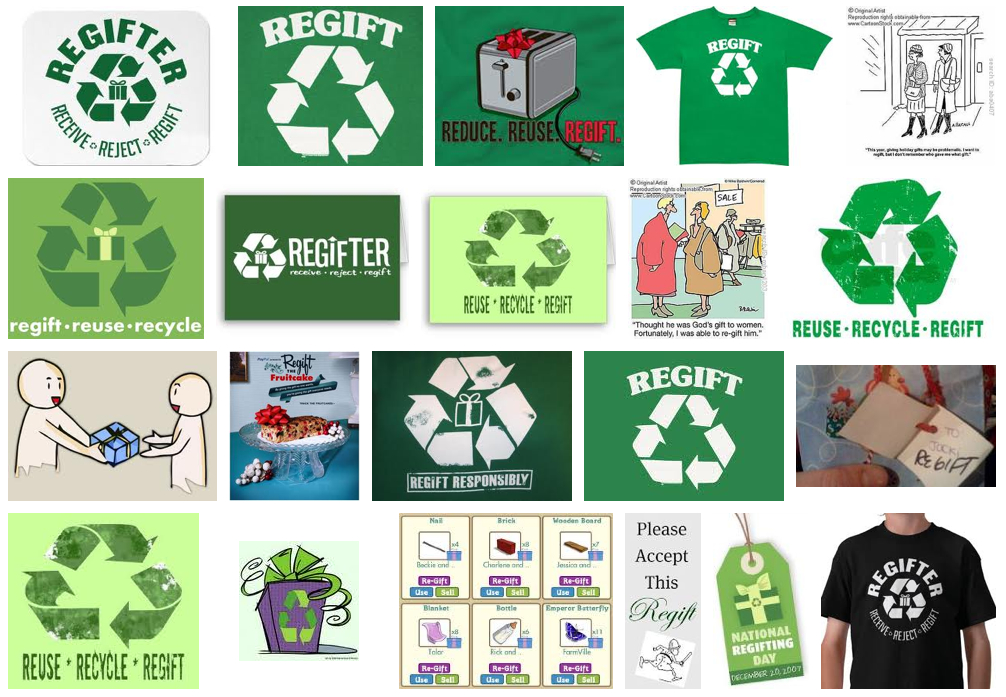 ‘Tis the season to buy, give, receive and “re-gift” mostly useless and unwanted “stuff”. That’s how many economists would characterize these days of retail madness. Matthew Yglesias over a Slate ponders a more efficient way to re-distribute wealth.

Christmas is not the most wonderful time of the year for economists. The holiday spirit is puzzlingly difficult to model: It plays havoc with the notion of rational utility-maximization. There’s so much waste! Price-insensitive travelers pack airports beyond capacity on Dec. 24 only to leave planes empty on Christmas Day. Even worse are the gifts, which represent an abandonment of our efficient system of monetary exchange in favor of a semi-barbaric form of bartering.

Still, even the most rational and Scroogey of economists must concede that gift-giving is clearly here to stay. What’s needed is a bit of advice: What can economics tell us about efficient gifting so that your loved ones get the most bang for your buck?

We need to start with the basic problem of gift-giving and barter in general: preference heterogeneity. Different people, in other words, want different stuff and they value it differently.

In a system of monetary exchange, everything has more or less one price. In that sense, we can say that a Lexus or a pile of coconuts is “worth” a certain amount: its market price. But I, personally, would have little use for a Lexus. I live in an apartment building near a Metro station and above a supermarket; I walk to work; and driving up to New York to visit my family is much less practical than taking a bus or a train. So while of course I won’t complain if you buy me a Lexus, its value to me will be low relative to its market price. Similarly, I don’t like coconuts and I’m not on the verge of starvation. If you dump a pile of coconuts in my living room, all you’re doing is creating a hassle for me. The market price of coconuts is low, but the utility I would derive from a gift of coconuts is actually negative.

In the case of the Lexus, the sensible thing for me to do would be to sell the car. But this would be a bit of a hassle and would doubtless leave me with less money in my pocket than you spent.

This gap between what something is worth to me and what it actually costs is “deadweight loss.” The deadweight loss can be thought of in monetary terms, or you might think of it as the hassle involved in returning something for store credit. It’s the gap in usefulness between a $20 gift certificate to the Olive Garden and a $20 bill that could, among other things, be used to buy $20 worth of food at Olive Garden. Research suggests that there’s quite a lot of deadweight loss during the holiday season. Joel Waldfogel’s classic paper (later expanded into a short book) suggests that gift exchange carries with it an average deadweight loss of 10 percent to a third of the value of the gifts. The National Retail Federation is projecting total holiday spending of more than $460 billion, implying $46-$152 billion worth of holiday wastage, potentially equivalent to an entire year’s worth of output from Iowa.

Partially rescuing Christmas is the reality that a lot of gift-giving isn’t exchange at all. Rather, it’s a kind of Robin Hood transfer in which we take resources from (relatively) rich parents and grandparents and give them to kids with little or no income. This is welfare enhancing for the same reason that redistributive taxation is welfare enhancing: People with less money need the stuff more.

A fascinating infographic below highlights the most popular children’s Christmas gifts over the last 100 years. Of course, classic toys seem to go on and on and on… 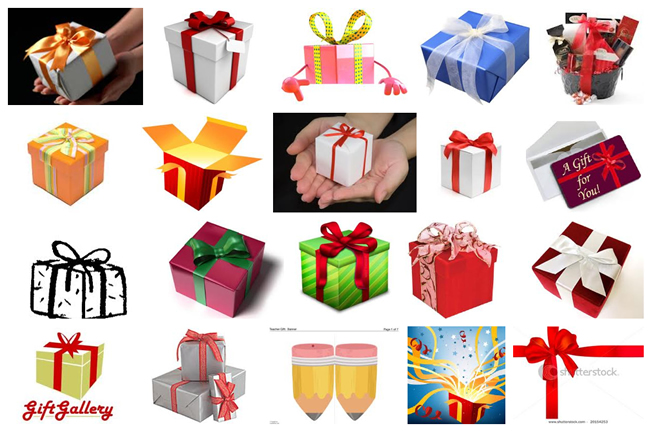 Rational economists fixate on a situation in which, say, your Aunt Bertha spends $50 on a shirt for you, and you end up wearing it just once (when she visits). Her hard-earned cash has evaporated, and you don’t even like the present! One much-cited study estimated that as much as a third of the money spent on Christmas is wasted, because recipients assign a value lower than the retail price to the gifts they receive. Rational economists thus make a simple suggestion: Give cash or give nothing.

In this view, gifts aren’t irrational. It’s just that rational economists have failed to account for their genuine social utility. So let’s examine the rational and irrational reasons to give gifts.

Some gifts, of course, are basically straightforward economic exchanges. This is the case when we buy a nephew a package of socks because his mother says he needs them. It is the least exciting kind of gift but also the one that any economist can understand.

A second important kind of gift is one that tries to create or strengthen a social connection. The classic example is when somebody invites us for dinner and we bring something for the host. It’s not about economic efficiency. It’s a way to express our gratitude and to create a social bond with the host.

Another category of gift, which I like a lot, is what I call “paternalistic” gifts—things you think somebody else should have. I like a certain Green Day album or Julian Barnes novel or the book “Predictably Irrational,” and I think that you should like it, too. Or I think that singing lessons or yoga classes will expand your horizons—and so I buy them for you.