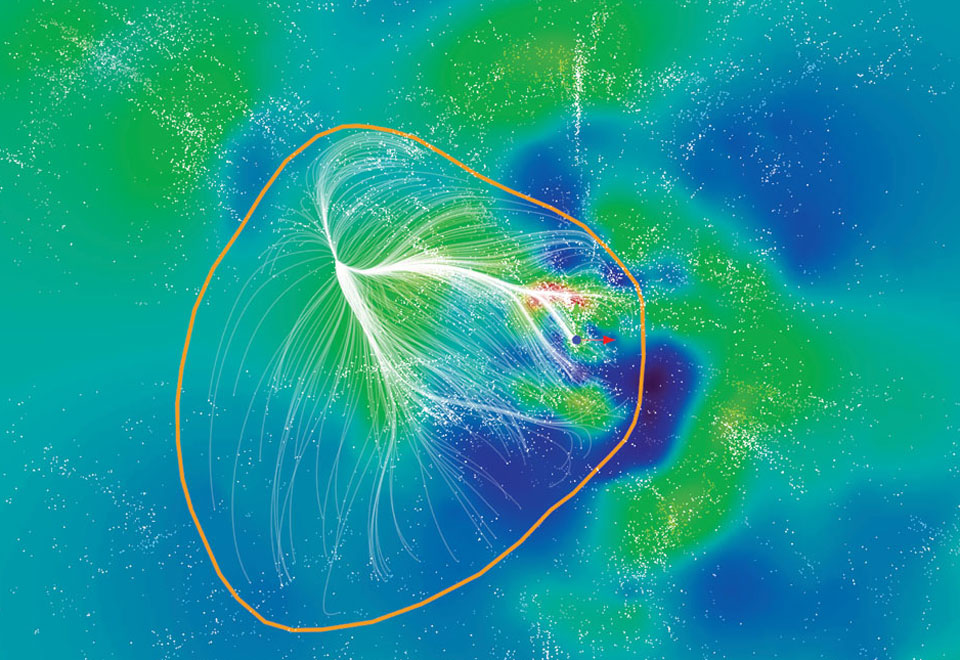 Once upon a time we humans sat smugly at the center of the universe. Now, many of us (though, not yet all) know better. Over the the last several centuries we learned and accepted that the Earth spun around the nearest Star, and not the converse. We then learned that the Sun formed part of an immense galaxy, the Milky Way, itself spinning in a vast cosmological dance. More recently, we learned that the Milky Way formed part of a larger cluster of galaxies, known as the Local Group.

Now we find that our Local Group is a mere speck within an immense supercluster containing around 100,000 galaxies spanning half a billion light years. Researchers have dubbed this galactic supercluster, rather aptly, Laniakea, Hawaiian for “immense heaven”. Laniakea is your new address. And, fascinatingly, Laniakea is moving towards an even larger grouping of galaxies named the Shapely supercluster.

In what amounts to a back-to-school gift for pupils with nerdier leanings, researchers have added a fresh line to the cosmic address of humanity. No longer will a standard home address followed by “the Earth, the solar system, the Milky Way, the universe” suffice for aficionados of the extended astronomical location system.

The extra line places the Milky Way in a vast network of neighbouring galaxies or “supercluster” that forms a spectacular web of stars and planets stretching across 520m light years of our local patch of universe. Named Laniakea, meaning “immeasurable heaven” in Hawaiian, the supercluster contains 100,000 large galaxies that together have the mass of 100 million billion suns.

Our home galaxy, the Milky Way, lies on the far outskirts of Laniakea near the border with another supercluster of galaxies named Perseus-Pisces. “When you look at it in three dimensions, is looks like a sphere that’s been badly beaten up and we are over near the edge, being pulled towards the centre,” said Brent Tully, an astronomer at the University of Hawaii in Honolulu.

Astronomers have long known that just as the solar system is part of the Milky Way, so the Milky Way belongs to a cosmic structure that is much larger still. But their attempts to define the larger structure had been thwarted because it was impossible to work out where one cluster of galaxies ended and another began.

Tully’s team gathered measurements on the positions and movement of more than 8,000 galaxies and, after discounting the expansion of the universe, worked out which were being pulled towards us and which were being pulled away. This allowed the scientists to define superclusters of galaxies that all moved in the same direction (if you’re reading this story on a mobile device, click here to watch a video explaining the research).

The work published in Nature gives astronomers their first look at the vast group of galaxies to which the Milky Way belongs. A narrow arch of galaxies connects Laniakea to the neighbouring Perseus-Pisces supercluster, while two other superclusters called Shapley and Coma lie on the far side of our own.

Tully said the research will help scientists understand why the Milky Way is hurtling through space at 600km a second towards the constellation of Centaurus. Part of the reason is the gravitational pull of other galaxies in our supercluster.

“But our whole supercluster is being pulled in the direction of this other supercluster, Shapley, though it remains to be seen if that’s all that’s going on,” said Tully.

Read the entire article here or the nerdier paper here.