So, it is no longer a surprise — our digital lives are tracked, correlated, stored and examined. The NSA (National Security Agency) does it to determine if you are an unsavory type; Google does it to serve you better information and ads; and, a whole host of other companies do it to sell you more things that you probably don’t need and for a price that you can’t afford. This of course raises deep and troubling questions about privacy. With this in mind, some are taking ownership of the issue and seeking to erase themselves from the vast digital Orwellian eye. However, to some being untraceable online is a fashion statement, rather than a victory for privacy.

“The chicest thing,” said fashion designer Phoebe Philo recently, “is when you don’t exist on Google. God, I would love to be that person!”

Philo, creative director of Céline, is not that person. As the London Evening Standard put it: “Unfortunately for the famously publicity-shy London designer – Paris born, Harrow-on-the-Hill raised – who has reinvented the way modern women dress, privacy may well continue to be a luxury.” Nobody who is oxymoronically described as “famously publicity-shy” will ever be unGoogleable. And if you’re not unGoogleable then, if Philo is right, you can never be truly chic, even if you were born in Paris. And if you’re not truly chic, then you might as well die – at least if you’re in fashion.

If she truly wanted to disappear herself from Google, Philo could start by changing her superb name to something less diverting. Prize-winning novelist AM Homes is an outlier in this respect. Google “am homes” and you’re in a world of blah US real estate rather than cutting-edge literature. But then Homes has thought a lot about privacy, having written a play about the most famously private person in recent history, JD Salinger, and had him threaten to sue her as a result.

And Homes isn’t the only one to make herself difficult to detect online. UnGoogleable bands are 10 a penny. The New York-based band !!! (known verbally as “chick chick chick” or “bang bang bang” – apparently “Exclamation point, exclamation point, exclamation point” proved too verbose for their meagre fanbase) must drive their business manager nuts. As must the band Merchandise, whose name – one might think – is a nominalist satire of commodification by the music industry. Nice work, Brad, Con, John and Rick.

If Philo renamed herself online as Google Maps or @, she might make herself more chic.

But still, maybe we should all embrace anonymity, given this week’s revelations that technology giants cooperated in Prism, a top-secret system at the US National Security Agency that collects emails, documents, photos and other material for secret service agents to review. It has also been a week in which Lindsay Mills, girlfriend of NSA whistleblower Edward Snowden, has posted on her blog (entitled: “Adventures of a world-traveling, pole-dancing super hero” with many photos showing her performing with the Waikiki Acrobatic Troupe) her misery that her fugitive boyfriend has fled to Hong Kong. Only a cynic would suggest that this blog post might help the Waikiki Acrobating Troupe veteran’s career at this – serious face – difficult time. Better the dignity of silent anonymity than using the internet for that.

Furthermore, as social media diminishes us with not just information overload but the 24/7 servitude of liking, friending and status updating, this going under the radar reminds us that we might benefit from withdrawing the labour on which the founders of Facebook, Twitter and Instagram have built their billions. “Today our intense cultivation of a singular self is tied up in the drive to constantly produce and update,” argues Geert Lovink, research professor of interactive media at the Hogeschool van Amsterdam and author of Networks Without a Cause: A Critique of Social Media. “You have to tweet, be on Facebook, answer emails,” says Lovink. “So the time pressure on people to remain present and keep up their presence is a very heavy load that leads to what some call the psychopathology of online.”

Internet evangelists such as Clay Shirky and Charles Leadbeater hoped for something very different from this pathologised reality. In Shirky’s Here Comes Everybody and Leadbeater’s We-Think, both published in 2008, the nascent social media were to echo the anti-authoritarian, democratising tendencies of the 60s counterculture. Both men revelled in the fact that new web-based social tools helped single mothers looking online for social networks and pro-democracy campaigners in Belarus. Neither sufficiently realised that these tools could just as readily be co-opted by The Man. Or, if you prefer, Mark Zuckerberg.

Not that Zuckerberg is the devil in this story. Social media have changed the way we interact with other people in line with what the sociologist Zygmunt Bauman wrote in Liquid Love. For us “liquid moderns”, who have lost faith in the future, cannot commit to relationships and have few kinship ties, Zuckerberg created a new way of belonging, one in which we use our wits to create provisional bonds loose enough to stop suffocation, but tight enough to give a needed sense of security now that the traditional sources of solace (family, career, loving relationships) are less reliable than ever. 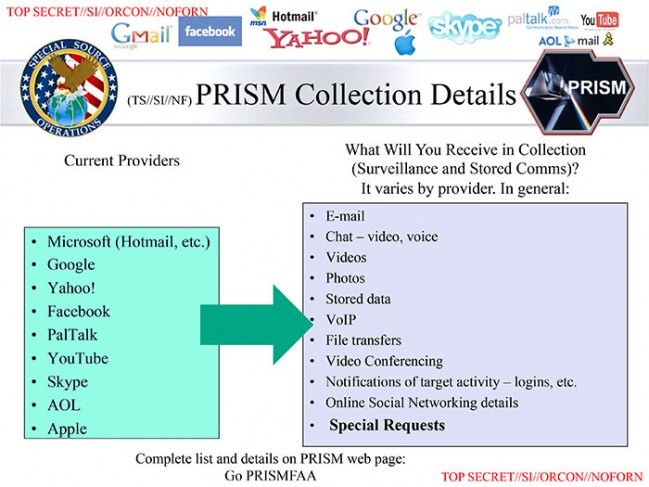 From the news reports first aired a couple of days ago and posted here, we now know the U.S. National Security Agency (NSA) has collected and is collecting vast amounts of data related to our phone calls. But, it seems that this is only the very tip of a very large, nasty iceberg. Our government is also sifting though our online communications as well — email, online chat, photos, videos, social networking data.

Through a top-secret program authorized by federal judges working under the Foreign Intelligence Surveillance Act (FISA), the U.S. intelligence community can gain access to the servers of nine Internet companies for a wide range of digital data. Documents describing the previously undisclosed program, obtained by The Washington Post, show the breadth of U.S. electronic surveillance capabilities in the wake of a widely publicized controversy over warrantless wiretapping of U.S. domestic telephone communications in 2005.

Image: From the PRISM Powerpoint presentation – The PRISM program collects a wide range of data from the nine companies, although the details vary by provider. Courtesy of Washington Post.

The U.S. government is spying on your phone calls with the hushed assistance of companies like Verizon. While the National Security Agency (NSA) may not be listening to your actual conversations (yet), its agents are actively gathering data about your calls: who you call, from where you call, when you call, how long the call lasts.

The price of freedom is becoming ever more expensive, and with broad clandestine activities like this underway — with no specific target — our precious freedoms continue to erode. Surely, this must delight our foes, who will gain relish from the self-inflicted curtailment of civil liberties — the societal consequences are much more far-reaching than those from any improvised explosive device (IED) however heinous and destructive.

The National Security Agency is currently collecting the telephone records of millions of US customers of Verizon, one of America’s largest telecoms providers, under a top secret court order issued in April.

The order, a copy of which has been obtained by the Guardian, requires Verizon on an “ongoing, daily basis” to give the NSA information on all telephone calls in its systems, both within the US and between the US and other countries.

The document shows for the first time that under the Obama administration the communication records of millions of US citizens are being collected indiscriminately and in bulk – regardless of whether they are suspected of any wrongdoing.

The secret Foreign Intelligence Surveillance Court (Fisa) granted the order to the FBI on April 25, giving the government unlimited authority to obtain the data for a specified three-month period ending on July 19.

Under the terms of the blanket order, the numbers of both parties on a call are handed over, as is location data, call duration, unique identifiers, and the time and duration of all calls. The contents of the conversation itself are not covered.

The disclosure is likely to reignite longstanding debates in the US over the proper extent of the government’s domestic spying powers.

Under the Bush administration, officials in security agencies had disclosed to reporters the large-scale collection of call records data by the NSA, but this is the first time significant and top-secret documents have revealed the continuation of the practice on a massive scale under President Obama.

The unlimited nature of the records being handed over to the NSA is extremely unusual. Fisa court orders typically direct the production of records pertaining to a specific named target who is suspected of being an agent of a terrorist group or foreign state, or a finite set of individually named targets.

The Guardian approached the National Security Agency, the White House and the Department of Justice for comment in advance of publication on Wednesday. All declined. The agencies were also offered the opportunity to raise specific security concerns regarding the publication of the court order.

The court order expressly bars Verizon from disclosing to the public either the existence of the FBI’s request for its customers’ records, or the court order itself.

The order, signed by Judge Roger Vinson, compels Verizon to produce to the NSA electronic copies of “all call detail records or ‘telephony metadata’ created by Verizon for communications between the United States and abroad” or “wholly within the United States, including local telephone calls”.

The order directs Verizon to “continue production on an ongoing daily basis thereafter for the duration of this order”. It specifies that the records to be produced include “session identifying information”, such as “originating and terminating number”, the duration of each call, telephone calling card numbers, trunk identifiers, International Mobile Subscriber Identity (IMSI) number, and “comprehensive communication routing information”.

The information is classed as “metadata”, or transactional information, rather than communications, and so does not require individual warrants to access. The document also specifies that such “metadata” is not limited to the aforementioned items. A 2005 court ruling judged that cell site location data – the nearest cell tower a phone was connected to – was also transactional data, and so could potentially fall under the scope of the order.

While the order itself does not include either the contents of messages or the personal information of the subscriber of any particular cell number, its collection would allow the NSA to build easily a comprehensive picture of who any individual contacted, how and when, and possibly from where, retrospectively.

It is not known whether Verizon is the only cell-phone provider to be targeted with such an order, although previous reporting has suggested the NSA has collected cell records from all major mobile networks. It is also unclear from the leaked document whether the three-month order was a one-off, or the latest in a series of similar orders.