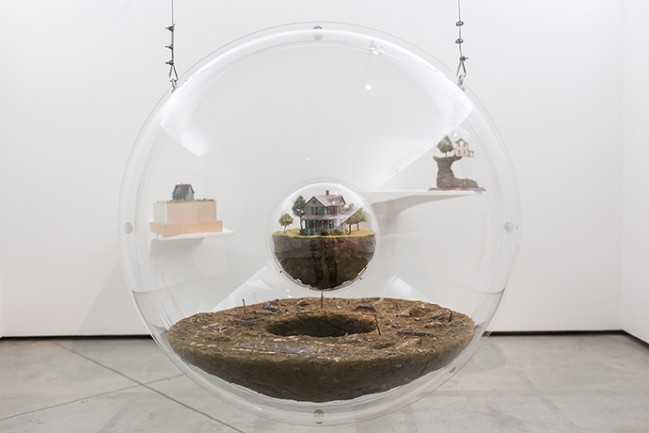 The (American) dream of home ownership comes under the microscopic, and somewhat surreal, analysis of sculptor Thomas Doyle. The result is a spectacular exhibit — albeit on a small scale — of miniature homes and landscapes sealed under glass domes, and all with a peculiar, dystopian twist.

Built in miniature, these dioramas reveal scenes of destruction, mayhem and hyperreality. An exhibition of the scaled-down worlds of New York-based artists Adrien Broom, Thomas Doyle and Patrick Jacobs opens at Ronchini Gallery in London on 6 September

Tilt-shift photography has been around for quite a while, primarily as a tool in high-end architectural photography. More recently with the advent of more affordable lens attachments for consumer cameras and through software post-processing, including Photoshop and Instagram, tilt-shift is becoming more mainstream.

Tilt-shift is a combination of two movements. Photographers tilt, or rotate, the lens plane relative to the image to control which part of an image retains focus. Then, they shift the perspective to re-position the subject in the image (this usually has the effect of reducing the convergence of parallel lines). When used appropriately, tilt-shift delivers a highly selective focus, and the resulting images give the illusion of a miniaturized landscape.

[div class=attrib]More tilt-shift photographs from the Telegraph after the jump.[end-div]

[div class=attrib]Image: Brighton beach, on the south coast of Sussex, England. Courtesy of the Telegraph.[end-div]