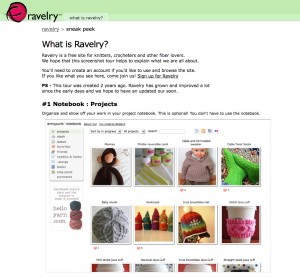 Facebook with its estimated 600-700 million users, multi-billion dollar valuation, and its 2,500 or so employees in 15 countries is an internet juggernaut by most measures. But, measure a social network by the loyalty and adoration of its users and Facebook is likely to be eclipsed by a social network of knitters and crocheters.

The online community is known as Ravelry. It was created by a wife-and-husband team and has four employees, including the founders, and boasts around 1.5 million members.

The best social network you’ve (probably) never heard of is one-five-hundredth the size of Facebook. It has no video chat feature, it doesn’t let you check in to your favorite restaurant, and there are no games. The company that runs it has just four employees, one of whom is responsible for programming the entire operation. It has never taken any venture capital money and has no plans to go public. Despite these apparent shortcomings, the site’s members absolutely adore it. They consider it a key part of their social lives, and they use it to forge deeper connections with strangers—and share more about themselves—than you’re likely to see elsewhere online. There’s a good chance this site isn’t for you, but after you see how much fun people have there, you’ll wish you had a similar online haunt. The social network is called Ravelry. It’s for knitters (and crocheters).

Ravelry’s success is evidence in favor of an argument that you often hear from Facebook’s critics: A single giant social network is no fun. Social sites work better when they’re smaller and bespoke, created to cater to a specific group. What makes Ravelry work so well is that, in addition to being a place to catch up with friends, it is also a boon to its users’ favorite hobby—it helps people catalog their yarn, their favorite patterns, and the stuff they’ve made or plan on making. In other words, there is something to do there. And having something to do turns out to make an enormous difference in the way people interact with one another on the Web.