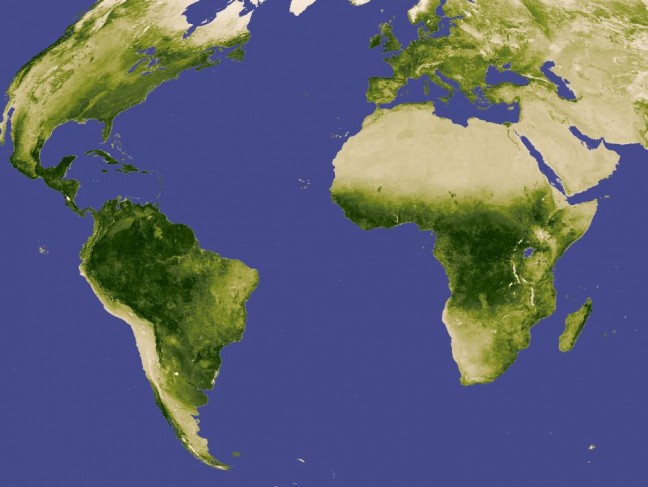 So the changing global climate will imperil our coasts, flood low-lying lands, fuel more droughts, increase weather extremes, and generally make the planet more toasty. But, a new study — for the first time — links increasing levels of CO2 to an increase in global vegetation. Perhaps this portends our eventual fate — ceding the Earth back to the plants — unless humans make some drastic behavioral changes.

The planet is getting lusher, and we are responsible. Carbon dioxide generated by human activity is stimulating photosynthesis and causing a beneficial greening of the Earth’s surface.

For the first time, researchers claim to have shown that the increase in plant cover is due to this “CO2 fertilisation effect” rather than other causes. However, it remains unclear whether the effect can counter any negative consequences of global warming, such as the spread of deserts.

Recent satellite studies have shown that the planet is harbouring more vegetation overall, but pinning down the cause has been difficult. Factors such as higher temperatures, extra rainfall, and an increase in atmospheric CO2 – which helps plants use water more efficiently – could all be boosting vegetation.

To home in on the effect of CO2, Randall Donohue of Australia’s national research institute, the CSIRO in Canberra, monitored vegetation at the edges of deserts in Australia, southern Africa, the US Southwest, North Africa, the Middle East and central Asia. These are regions where there is ample warmth and sunlight, but only just enough rainfall for vegetation to grow, so any change in plant cover must be the result of a change in rainfall patterns or CO2 levels, or both.

If CO2 levels were constant, then the amount of vegetation per unit of rainfall ought to be constant, too. However, the team found that this figure rose by 11 per cent in these areas between 1982 and 2010, mirroring the rise in CO2 (Geophysical Research Letters, doi.org/mqx). Donohue says this lends “strong support” to the idea that CO2 fertilisation drove the greening.

Climate change studies have predicted that many dry areas will get drier and that some deserts will expand. Donohue’s findings make this less certain.

However, the greening effect may not apply to the world’s driest regions. Beth Newingham of the University of Idaho, Moscow, recently published the result of a 10-year experiment involving a greenhouse set up in the Mojave desert of Nevada. She found “no sustained increase in biomass” when extra CO2 was pumped into the greenhouse. “You cannot assume that all these deserts respond the same,” she says. “Enough water needs to be present for the plants to respond at all.”

The extra plant growth could have knock-on effects on climate, Donohue says, by increasing rainfall, affecting river flows and changing the likelihood of wildfires. It will also absorb more CO2 from the air, potentially damping down global warming but also limiting the CO2 fertilisation effect itself.

Image: Global vegetation mapped: Normalized Difference Vegetation Index (NDVI) from Nov. 1, 2007, to Dec. 1, 2007, during autumn in the Northern Hemisphere. This monthly average is based on observations from the Moderate Resolution Imaging Spectroradiometer (MODIS) on NASA’s Terra satellite. The greenness values depict vegetation density; higher values (dark greens) show land areas with plenty of leafy green vegetation, such as the Amazon Rainforest. Lower values (beige to white) show areas with little or no vegetation, including sand seas and Arctic areas. Areas with moderate amounts of vegetation are pale green. Land areas with no data appear gray, and water appears blue. Courtesy of NASA.

It’s time to jettison the $1.99 hyper-burger and super-sized fires and try some real fruits and vegetables. You know — the kind of product that comes directly from the soil. But, when is the best time to suck on a juicy peach or chomp some crispy radicchio?

A great chart, below, summarizes which fruits and vegetables are generally in season for the Northern Hemisphere.