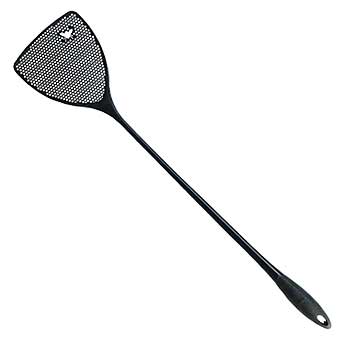 United States Patent 640,790 covers a simple and effective technology, invented by Robert Montgomery. The patent for a “Fly Killer”, or fly swatter as it is now more commonly known, was issued in 1900.

Sometimes the simplest design is the most pervasive and effective.

The first modern fly-destruction device was invented in 1900 by Robert R. Montgomery, an entrepreneur based in Decatur, Ill. Montgomery was issued Patent No. 640,790 for the Fly-Killer, a “cheap device of unusual elasticity and durability” made of wire netting, “preferably oblong,” attached to a handle. The material of the handle remained unspecified, but the netting was crucial: it reduced wind drag, giving the swatter a “whiplike swing.” By 1901, Montgomery’s invention was advertised in Ladies’ Home Journal as a tool that “kills without crushing” and “soils nothing,” unlike, say, a rolled-up newspaper might.

Montgomery sold the patent rights in 1903 to an industrialist named John L. Bennett, who later invented the beer can. Bennett improved the design — stitching around the edge of the netting to keep it from fraying — but left the name.

The various fly-killing implements on the market at the time got the name “swatter” from Samuel Crumbine, secretary of the Kansas Board of Health. In 1905, he titled one of his fly bulletins, which warned of flyborne diseases, “Swat the Fly,” after a chant he heard at a ballgame. Crumbine took an invention known as the Fly Bat — a screen attached to a yardstick — and renamed it the Fly Swatter, which became the generic term we use today.

Fly-killing technology has advanced to include fly zappers (electrified tennis rackets that roast flies on contact) and fly guns (spinning discs that mulch insects). But there will always be less techy solutions: flypaper (sticky tape that traps the bugs), Fly Bottles (glass containers lined with an attractive liquid substance) and the Venus’ flytrap (a plant that eats insects).

During a 2009 CNBC interview, President Obama killed a fly with his bare hands, triumphantly exclaiming, “I got the sucker!” PETA was less gleeful, calling it a public “execution” and sending the White House a device that traps flies so that they may be set free.

But for the rest of us, as the product blogger Sean Byrne notes, “it’s hard to beat the good old-fashioned fly swatter.”