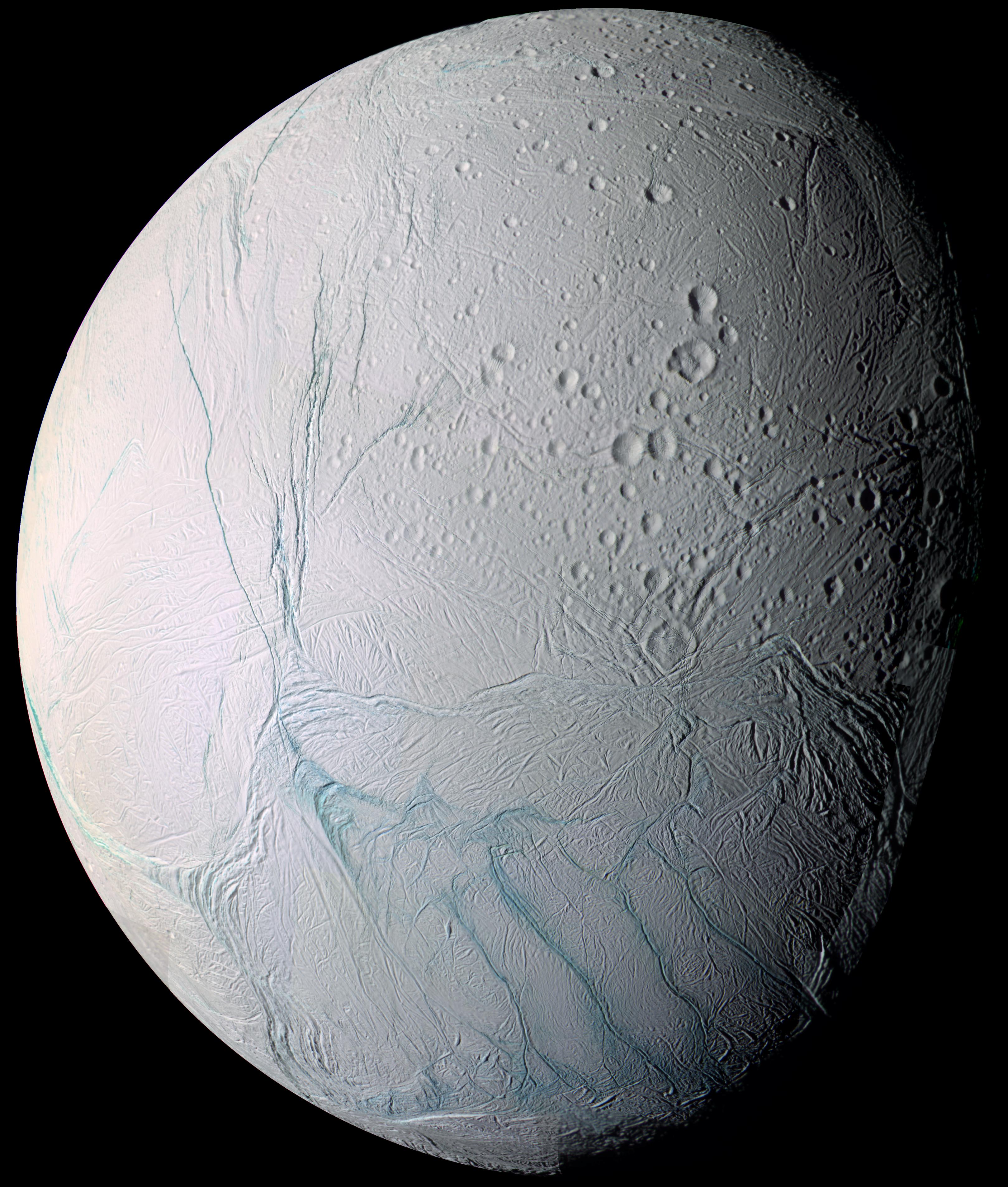 Researchers published details of this “subsurface anomaly” in the journal Science, on April 4, 2014. The summary reads as follows:

Our results indicate the presence of a negative mass anomaly in the south-polar region, largely compensated by a positive subsurface anomaly compatible with the presence of a regional subsurface sea at depths of 30 to 40 kilometers and extending up to south latitudes of about 50°. The estimated values for the largest quadrupole harmonic coefficients (106J2 = 5435.2 ± 34.9, 106C22 = 1549.8 ± 15.6, 1?) and their ratio (J2/C22 = 3.51 ± 0.05) indicate that the body deviates mildly from hydrostatic equilibrium. The moment of inertia is around 0.335MR2, where M is the mass and R is the radius, suggesting a differentiated body with a low-density core.

In effect this means that the researchers are reasonably confident that an ocean of water lies below the icy surface of Enceladus, one of Saturn’s most intriguing moons.

Inside a moon of Saturn, beneath its icy veneer and above its rocky core, is a sea of water the size of Lake Superior, scientists announced on Thursday.

The findings, published in the journal Science, confirm what planetary scientists have suspected about the moon, Enceladus, ever since they were astonished in 2005 by photographs showing geysers of ice crystals shooting out of its south pole.

“What we’ve done is put forth a strong case for an ocean,” said David J. Stevenson, a professor of planetary science at the California Institute of Technology and an author of the Science paper.

For many researchers, this tiny, shiny cue ball of a moon, just over 300 miles wide, is now the most promising place to look for life elsewhere in the solar system, even more than Mars.

“Definitely Enceladus,” said Larry W. Esposito, a professor of astrophysical and planetary sciences at the University of Colorado, who was not involved in the research. “Because there’s warm water right there now.”

Enceladus (pronounced en-SELL-a-dus) is caught in a gravitational tug of war between Saturn and another moon, Dione, which bends its icy outer layer, creating friction and heat. In the years since discovering the geysers, NASA’s Cassini spacecraft has made repeated flybys of Enceladus, photographing the fissures (nicknamed tiger stripes) where the geysers originate, measuring temperatures and identifying carbon-based organic molecules that could serve as building blocks for life.

Cassini has no instruments that can directly detect water beneath the surface, but three flybys in the years 2010-12 were devoted to producing a map of the gravity field, noting where the pull was stronger or weaker.

During the flybys, lasting just a few minutes, radio telescopes that are part of NASA’s Deep Space Network broadcast a signal to the spacecraft, which echoed it back to Earth. As the pull of Enceladus’s gravity sped and then slowed the spacecraft, the frequency of the radio signal shifted, just as the pitch of a train whistle rises and falls as it passes by a listener.

Using atomic clocks on Earth, the scientists measured the radio frequency with enough precision that they could discern changes in the velocity of Cassini, hundreds of millions of miles away, as minuscule as 14 inches an hour.

They found that the moon’s gravity was weaker at the south pole. At first glance, that is not so surprising; there is a depression at the pole, and lower mass means less gravity. But the depression is so large that the gravity should actually have been weaker.

“Then you say, ‘A-ha, there must be compensation,’ ” Dr. Stevenson said. “Something more dense under the ice. The natural candidate is water.”

Liquid water is 8 percent denser than ice, so the presence of a sea 20 to 25 miles below the surface fits the gravity measurements. “It’s an ocean that extends in all directions from the south pole to about halfway to the equator,” Dr. Stevenson said.

The underground sea is up to six miles thick, much deeper than a lake. “It’s a lot more water than Lake Superior,” Dr. Stevenson said. “It may even be bigger. The ocean could extend all the way to the north pole.”

The conclusion was not a surprise, said Christopher P. McKay, a planetary scientist at NASA Ames Research Center in Mountain View, Calif., who studies the possibility of life on other worlds, but “it confirms in a really robust way what has been sort of the standard model.”

It also makes Enceladus a more attractive destination for a future mission, especially one that would collect samples from the plumes and return them to Earth to see if they contain any microbes.