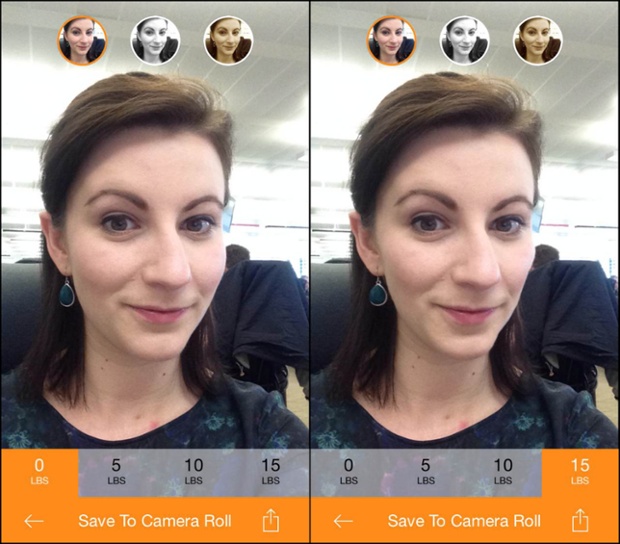 Two recent stories are indicative of these self-obsessed times, and of course, both center around the selfie. One gives us some added insights into SkinneePix — a smartphone app that supposedly transforms you into your thinner and more attractive self. The second, shows us that perhaps, just perhaps, the selfie craze has reached its zenith — as politicians and royals and pop-stars show us what their bed-heads and double chins look like.

I’d like to hope that the trend fizzles soon, as have thousands of flash-in-the-pan trends have done before. Yet, what if this is just the beginning of an era that is unabashedly more self-centered? After all, there is a vast untapped world of selfidom out there: audio selfies of our bathroom routines; selfies that automatically rate your BMI; selfies that you can print in 3D; selfies that become your personal digital assistant; selfies that text other selfies; a selfie hall-of-fame; selfies that call your analyst based on how you look; selfies that set up appointments with your hair stylist should your hair not look like the top 10 selfies of the day; selfies from inside the body; a selfie that turns off your credit card and orders celery if you look 5 lbs overweight; selfies of selfies.

If you thought Prince Andrew or Michael Gove’s attempts at selfies were the worst thing about the craze – think again.

There is now an app which is designed specifically to make you look skinnier in your selfies. Acting as a FatBooth in reverse, SkinneePix promises to make it look like you’ve shed 5, 10 or 15 lbs with just the click of a button.

The description reads: “SkinneePix makes your photos look good and helps you feel good. It’s not complicated. No one needs to know. It’s our little secret.”

It’s already the norm to add a toasted haze to pouty selfies thanks to photo filters, and some celebs have even been accused of airbrushing their own pictures before putting them up on Instagram – so it was only a matter of time before someone came up with an app like this.

Creators Susan Green and Robin J Phillips say they came up with the app after discovering they hated all the selfies they took on holiday with friends. Green told the Huffington Post: “You’ve always heard about the camera adding 15 pounds, we just wanted to level the playing field.”

They do say don’t knock something til you’ve tried it, so I handed over 69p to iTunes in order to have a poke around the app and see what it’s really like. As it boots up the camera, it flashes up a little message which range from “Good hair day!” to “Make me look good”.

You can’t alter group pictures such as the now infamous Oscars selfie, so I snapped a quick photo at my desk.

RIP The Selfie. It was fun while it lasted, really it was. What larks and indeed Likes as we watched popstrels Rihanna and Rita Ora and model Cara Delevigne record their tiny bikinis and piercings and bed-heads and, once, an endangered slow loris, for posterity.

The ironic Selfie remained fun and fresh and pout-tastic even when it was ushered into the august oak-paneled annals of the Oxford English Dictionary.

The egocentric Selfie weathered President Obama taking a deeply inappropriate quickie at Nelson Mandela’s funeral with the hottie Danish PM whose name we have all forgotten, and David Cameron.

The stealth Selfie even survived the PM being snapped barefoot and snoozing on the bed of his sister-in-law on the morning of her wedding day.

And the recent Ellen DeGeneres Oscars Selfie, with every celeb that ever there was jam-packed together (and, astonishingly, in focus) pretty much qualifies as the Sgt. Pepper’s Lonely Hearts album cover de nos jours.

But then, as is the inevitable parabola of such things, this week the entire phenomenon took a nosedive and died a million pixellated deaths thanks first to Ed Milliband’s blurred, sad-sack Selfie, in which he’s barely in the frame. Bit like his political career, really.

Then came the Parthian Shot: Prince Andrew’s royal snap in which the west wing of Buck House was eclipsed by his Selfie-satisfied porky chops.

And with that, a cutting edge trend turned into the dire digital equivalent of dad-dancing.

Image courtesy of the Guardian / Skinneepix.